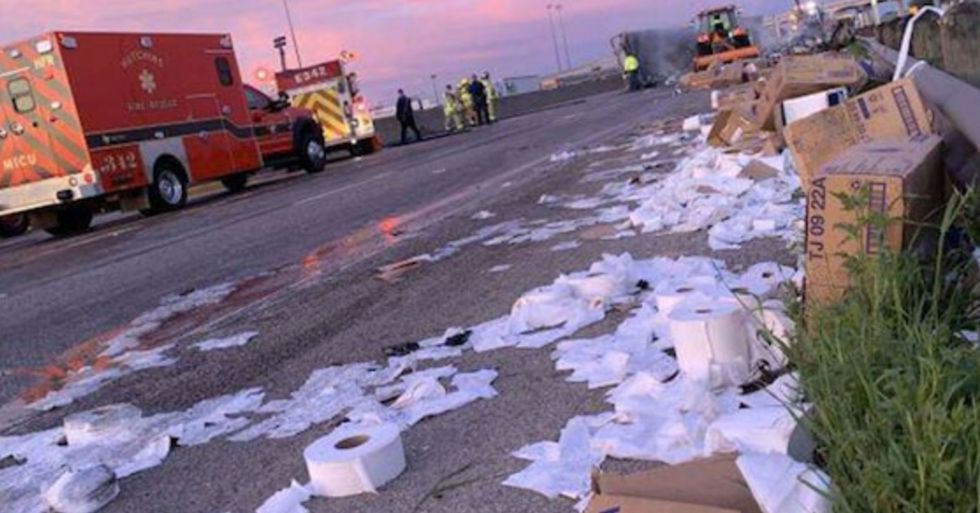 Amid all the frenzied stockpiling emptying our supermarket's shelves all over the world, many people are struggling to provide properly for their families.

An accident on a Texas interstate has helped open up the eyes of people up and down the country.

Keep scrolling for the full story including the devastating photographs from the scene.

Stockpiling has been one of the horrible outcomes of this pandemic.

It seems as though people aren't understanding that simply buying a month's worth of groceries won't help you survive compared to other normal folks who have opted not to panic buy.

And as the coronavirus continues to infect the globe...

The issue seems to be getting worse.

Italy was one of the first nations to go into lockdown.

Leaving their streets completely deserted. And despite their conditions being more serious, they have not chosen to act selfishly.

Many people in the States have been descending into mass hysteria over the risks the virus brings with it.

But, amid all the panic and hysteria...

Things have started to get ridiculous.

People seem to think that buying a years' worth of toilet paper will protect them from the virus...

Oh, alongside thirty cans of tomatoes. Because that makes total sense, right?

Mothers with no diapers. The elderly with no food. It just simply isn't right.

Now, an accident on the motorway has opened people's eyes.

Because of the mad rush, companies up and down the country have decided they need more products to fill their shelves.

A truck, carrying thousands of rolls of toilet paper across the country, crashed.

The eighteen-wheeler was involved in an accident on the Texas interstate and immediately burst into flames afterward, destroying the precious contents of the truck.

Thankfully no one was injured.

The driver and his pet dog were both fine, but firefighters reported that everything was up in flames when they arrived on the scene.

This is truly devastating news. It's needless to say that the coronavirus has turned our world completely upside down...

And the entertainment industry has been also hit pretty badly, causing the industry as a whole to push back many major movie and TV show releases. Keep scrolling to find out which ones...