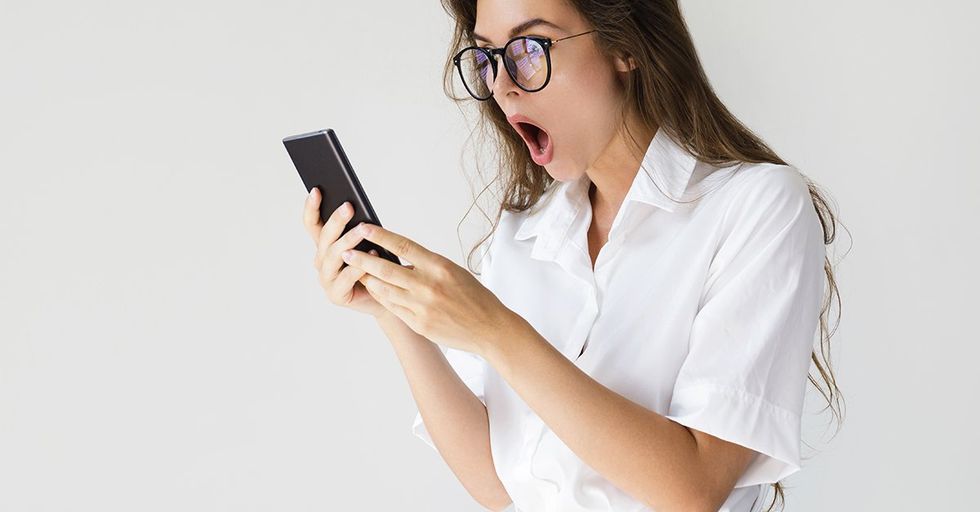 Have you ever read something so insane it just made your jaw drop? Most people like to think they're pretty well aware of what is "possible" and what is not. So it's not every day that we read something truly mind-blowing. But most--if not all--of the following completely true facts that seem crazy are sure to surprise you.

From obscure details about evolution and weird history facts to the anatomy of giant squids, Reddit is full of wild information. In fact, you may as well give your jaw a massage right now, because it'll be on the ground for the rest of this article. One thing is for sure: these true facts that seem crazy will make for the most fascinating thing you'll probably read for quite a while!

There is a 1 in roughly 5.2 to the 61st power chance that if you were to slap a table, all of the molecules in your hand and the table would miss each other and your hand would go through it.

Storytime: I learned this fact from a deep intellectual conversation with my engineering class 2 years ago, so there very well could be some kind of detail I'm missing here, but nonetheless, what I said is theoretically true.

Edit: apparently that would be known as 52 novemdecillion? Neet.

The FDA has really come a long way.

There used to be a radioactive energy drink called "Radithor" that was in the US market for a decade from 1918-1928. Some of the more prominent users had to be buried in lead coffins. -WildWonderWolf

And this is why real-life "Nuka Cola" finally went away.

Didn't they take that off the market after some guy drank so many of them so quick that his lower jaw fell off? -slyfurryfox Indeed, that is what happened!

Giant squids have a donut-shaped brain so their esophagus can run through the middle. If they try to swallow too large a bite of food they can get brain damage. -VerminSupreme__

What even WAS Wayne Gretzky?

You could take away all of Wayne Gretzky’s goals that he scored during his career and he would still be the all-time NHL points leader off his assists alone.

Bonus Gretzky fact: He and his brother own the record for being the highest-scoring pair of siblings. Brent had 4 points in his whole career.

This is horrifying but true.

The youngest mother to give birth became pregnant at 4 years old. -mortyshaw Her name is Lina Medina.

The world is a crowded place.

Is this science or witchcraft?

You can boil water in a paper cup over an open flame. -Peebahr

Gorillas have a wide range of emotions, we promise.

If a gorilla looks grumpy, it's because they are relaxed and at ease. -missy_is_my_master

Greenland extends east of, west of, south of and north of Iceland. -maxelson1978

Cool fact, but do NOT try this at home.

A morbidly obese person can survive with absolute starvation without any sickness or feeling ill (under close control). There have been studies since the '60s, there is a patient in 1973 who went under a 382-day starvation diet for therapeutic purposes under close control with only vitamin and mineral supplements and water intake without protein, carbohydrate or fat intake (no food at all). Dropped from 207 kg to 88kg and maintained it. After a follow-up check-up 5 years later, the patient was 96 kilograms, stabilized. Prolonged fasting had no ill effects. If anybody is curious about the article, the PubMed ID is PMC2495396. -Dartosismyname

This feels like an "out of the frying pan and into the fire" type scenario.

People were deliberately infected with malaria to cure their syphilis, and the man who developed this treatment Julius Wagner-Jauregg received the Nobel prize for it.

(The extremely high fevers of the malaria infections killed the syphilis bacteria, then the patients were cured of malaria using quinine.)

This is so cool! Too bad we'll never get to try it.

The gravity of black holes is so great that it literally bends light around the black hole so that if you could somehow stand close enough to a black hole and look straight ahead, you would actually see the back of your own head. -chyko9

Giraffes have an interesting diet.

When I was in Africa we were legit surrounded by a family(?) of 12 giraffes. Then one bent over and picked up a gazelle carcass, looked dead into our eyes as it ate its leg. It was so creepy. -Kibeth_8

Here's the root cause of the Great Potato Famine:

Ireland was a net exporter of food during the great potato famine. -270343

More people died making the V2 rockets during WW2 than were killed by them. -nellifant032

Apparently, V2 rockets were also just an excuse to get drunk!

Another fun fact about V2 rockets:

Germany was facing a large issue with rocket fuel shortages during the project because people kept drinking it. The fuel was made from 70% ethyl alcohol and 30% water, distilled from potatoes. It was the most economically viable fuel at the time since they were already very low on other fuels. To stop workers from drinking it, they denatured the alcohol (essentially poisoning it) but people kept drinking it anyway and getting extremely ill. This simply caused people to start leaving the V2 program, suggesting that they were only in it for the free alcohol.

This also means that any alcohol over 70% ABV is stronger than actual WW2 rocket fuel.

This guy's life was insane!

The life of Frane Selak, the luckiest unlucky man in the world:

• January 1962- Frane is riding on a train through a freezing canyon when it fell into an icy river. All 17 other passengers died while he escapes with a broken arm and hypothermia.

• 1963- On his first plane trip he was sucked out of the plane’s door and landed in a haystack, unscathed. 19 other people were killed in the crash.

• 1966- He was riding in a bus when it skidded off the road into yet another icy river. 4 passengers drowned while he only received some minor cuts and bruises.

•1970- His car’s engine burst into flames while he was driving but he managed to escape before it exploded.

•1973- In yet another driving incident, his car’s engine was doused with hot oil from a broken fuel pump. This caused flames to shoot through the air vents, singing off all of his hair. He was otherwise unharmed.

What are the odds of all this?!

•1995- He was hit by a bus but only sustained minor injuries.

•1996- To escape a head-on collision with a United-Nations truck on a mountain curve, he swerved into a guard rail that broke on impact. to save himself, he jumped out of his car’s open door and grabbed onto a tree branch as he watched his car plummet off the cliff.

Suffice to say the guy had a complicated relationship with the Grim Reaper.

I personally know someone who in his carry-on accidentally packed a loaded handgun, made it on the plane, and was so freaked out when he landed, he UPS'ed it back home and took a greyhound bus after his trip.

Taser is actually an acronym for "Thomas A. Swift's Electric Rifle."

Which came first: orange or the orange?

The color orange is named after the fruit. -SweatCleansTheSuit

This is why Switzerland is neutral; they're just bad at being anything else.

Switzerland has accidentally invaded Liechtenstein thrice in the last 50 years.

Takeaways: The Swiss army are bad with directions. The Liechtenstein people are chill bros.

Evolution is a funny thing.

Sharks evolved before trees did. -roran_ramsey

Way to tough it out, Mike!

Mike the Headless Chicken lived without a head for 18 months. -eternalrefuge86

Basically, James Cameron may have only made "Titanic" to set a deep-sea record.

Only four people have been to the Challenger Deep, the deepest part of the ocean. One of those people is James Cameron, the director of Titanic. -agnomengnome

We all learn history, but it's another thing to realize how much happens at the same time!

From 1613 and 1620 a Samurai traveled to Rome by way of Mexico. During this time, Shakespeare was still alive, Virginia had been founded for around a decade, Gallileo was accused of heresy, and Pocahontas arrived in England. He met the Pope he was made a Roman citizen. His name was Hasekura Tsunenaga and was the last Japanese person to officially visit Europe until around 1860. -thecinnaman123

This is so ADORABLE.

Cheetahs can't roar, but they can meow like house cats. -karatekid606

Wojtek was a dang legend.

A 500 lb. cigarette-smoking, beer-drinking brown bear named Wojtek was enlisted and served in the Polish army during WWII. "Private Wojtek" helped the Polish win the brutal Battle of Monte Cassino, and was even promoted to corporal. Following the war, he retired in Scotland. -CaptainWisconsin

This is kinda terrifying!

There was this french guy named Tarrare in the late 1700s that could eat ANYTHING, in any amount. He was able to eat a quarter of a cow on one day and ate dinner for 15 for one meal when he was being tested. He was even able to swallow an entire eel, with bones included, without hesitating. When he went to the military service, they used him as message transport, but after being captured he went back and tried to find a cure. In the hospital where he was staying, he was suspected of eating a baby so they kicked him out. He was average weight and when he died a few years later they could see inside his stomach just by opening his mouth.  -thealterlion

...Are they even twins anymore?

The longest time between two twins being born is 87 days.

The end to all "tomato" arguments ever:

There is no universally accepted definition of "vegetable."

It's a cultural and culinary term, and varies from place to place.

Chess is absolutely wild when you think about it.

World War II was also wild, in a much more horrifying way.

There were more planes destroyed in World War II than there are (currently intact) planes on Earth today. -Dickcheese_McDoogles

Okay, here's another that genuinely sounds made-up...but it's not.

If every single person on the entire planet took part in a rock paper scissors contest. Where everyone paired up and played, losers were knocked out and winners stayed on, etc...

You would only have to win 33 times in a row to beat all 7.53 billion people on the planet.

There is an extremely rare condition called "Stone Man Syndrome", it causes any, smallest damage done to the tissue to regrow into a bone, speaking briefly. People affected by this sickness slowly turn into living statues as they get older. -EnderCorePL

In case you didn't know that Bill Gates was loaded:

If you earned $1 every second, it would take 2,921 years to have more money than Bill Gates. -grwrnotashowrthought

Every two minutes, we take as many photos as all of humanity took during the 1800s. -scottjew

When you feel down on yourself, remember this cool statistic:

Even if 99% of Earth's population thought you were unattractive, 76 million people would still find you attractive. -forsoythemilk

Time truly is relative, and it's crazy to think about!

And Cleopatra lived closer to the first man on the moon than to the time the pyramids were built. -Laikathespaceface

Just bite the bullet and get a large pizza!

The sun is insanely powerful.

If sound could travel through space, the roar of the sun would be deafening even though it's 93M miles away.

But space is a vacuum, and sound can't travel though a vacuum.

Abraham lincoln was born in 1809 and the first dinosaur fossil was discovered in 1819; this means that he went his early childhood without going through his dinosaur phase :( -bignastty Share these insane facts with your friends!