Things That Are True but Sound Like an Exaggeration | 22 Words 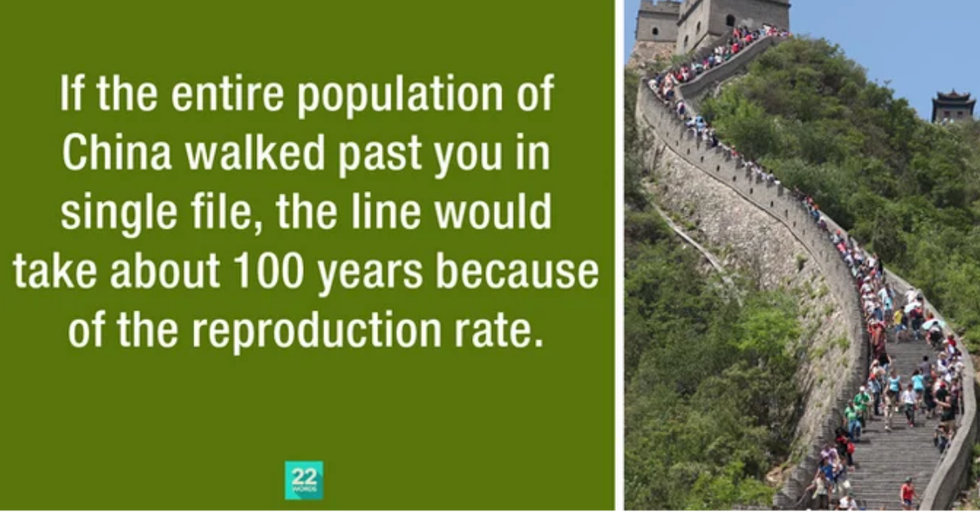 Things That Are True but Sound Like an Exaggeration

There are so many facts and things you hear that at first sound completely exaggerated, but are in fact absolutely true. If you're like me, then you love reading about these things and storing them away for a time when you can bust them out and impress everyone around you. That's a normal thing to do, right?

Well, here's some good news. Thanks to an insanely interesting Reddit thread, you can now know so many true facts that absolutely seem like exaggerations. You'll feel smarter by the end of this article, and you'll be way more knowledgeable. I mean, it's a total win-win, right?

Make sure to read all the facts because some of them are seriously going to blow your mind!

Who else uses "million" and "billion" interchangeably? When it comes to seconds, there's a huge difference! Whip this fact out at a dinner party and you'll be feeling like a bonafide smarty-pants.

My mind is blown.

Who else feels insanely old after reading this fact? Talk about something that feels like an exaggeration but isn't. Woof. Mike Wazowski and Sulley are old, y'all.

My brain is malfunctioning thinking about this fact. Nintendo existed at the same time as the Ottoman Empire. Cool. That's fine. My brain totally isn't melting because of this fact.

At the end of the day, Mount Everest is still Mount Everest. It's huge! It will always be huge. But now you know the exact measurements. Don't you feel smarter?

Who else is suddenly inspired to take a road trip to Canada? Geography is wild. Which is also a phrase I want on a t-shirt.

I'd rather not think about it.

I don't think anybody wants to think about their father procreating, but this is seriously interesting.

What do you think a joint birthday party for Charles Darwin and Abe Lincoln would look like? What kind of cake would they share? So many questions...

Time for a walk!

I wonder if anyone has ever tried this walk. Yeah, your feet would definitely be a bit sore, but what an accomplishment!

I understand that saying "space is big" is the most obvious statement in the world. But sometimes when I think about the sheer magnitude of space, it's incredibly daunting! Anybody else obsessed with just how enormous outer space is?

Folding a single piece of paper can definitely be exhausting. So yeah, this makes perfect sense...

I want to believe...

If you're like me, then you always forget that clouds aren't light and fluffy. Whoops.

Sharks have such a bad reputation, but they're so cool. And vending machines are apparently more deadly. Somebody needs to make a horror movie about a vending machine named "Claws." Hey Hollywood, are you listening?

Much like the Charles Darwin/Abe Lincoln birthday situation, it's always wild when you realize two historical figures were around each other or alive at the same time.

I never thought gummy bears could be deadly but here we are. You learn something new every day!

Cinephiles everywhere are shedding a tear. The next fact is quite interesting...

So many popes, so little time. Vatican City is popping off with popes.

That is a lot of people. Hearing the number of a population is one thing, but having it explained like this is quite another.

The age of the internet.

It's all about creating content, people! How else will influencers sustain their lives? Must...churn...out...content!

Woof. A depressing and upsetting fact for you to know.

A little bit of card magic.

A deck of cards can provide unlimited fun. Whoever says otherwise doesn't know what they're talking about.

Don't try this at home, kids.

While this fact is very interesting, I strongly encourage against trying it at home.

I wonder if they're competitive with each other? Nothing like a healthy does of sibling rivalry.

Keep reading for more things that sound like exaggerations rather than true facts.

This makes me feel ill.

Just imagining that many ants makes my stomach hurt. No thank you.

This reminds me of Succession...

Why does this fact feel like it was created for frat bros? Ultimate frisbee and brews, dude!

Who wants to go exploring?

Though make sure you pack a heavy jacket... I'm freezing just thinking about going to uninhabited Alaskan islands.

Do I sense the next Pixar movie plotline?

A wooly mammoth who finds itself at the Great Pyramids? I mean it writes itself! Share this article with your friend who loves random facts.