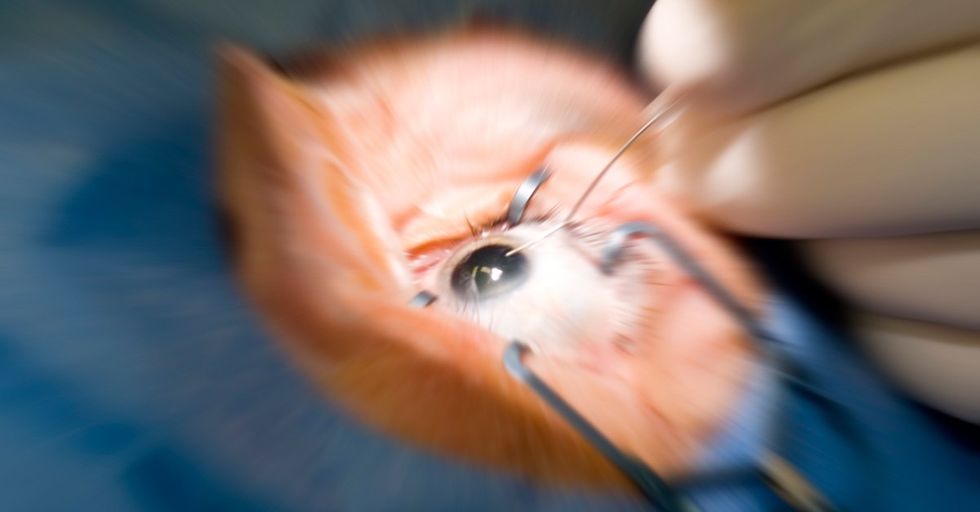 This isn’t your average trip to the doctor’s office! Medical sciences and knowledge is constantly evolving, but even so: some of the  following stories have thrown the most trained medical professionals for a loop.

Below are 18 cringe-inducing examples of unique medical mysteries, conditions, and malpractice that will seem more fabricated fiction than truth, but rest assured: everything you're about to read is totally true!

Impaled by a French fry!

Discovery Fit & Health’s I Was Impaled series introduced the story of a man who was impaled by a french fry. An errant fry actually ripped through his esophagus, sending him into shock.

Keep track of your contacts, everyone.

An old woman scheduled for cataract surgery had 27 contact lenses lodged in her right eye. Miraculously, her left eye had nothing wrong whatsoever; yet when doctors attempted to anesthetize her right eye, they encountered an initial stack of 17 lenses, followed by 10 more.

To this day, the exact nature of “the toxic lady" remains a mystery.

Gloria Ramirez was admitted to the ER in 1994 while suffering from late-stage cervical cancer. Strangely, hospital workers noted that she was covered in a strange oily sheen and had a garlic-like odor on her breath when she was admitted. As they treated her, multiple hospital workers began experiencing symptoms which included fainting, shortness of breath, and muscle spasms. Five workers were hospitalized themselves, and the hospital was evacuated. Ramirez died shorty after her arrival at the hospital, and an alien autopsy of her body was performed, but the exact cause of the events that evening remain a mystery.

Mid-surgery is a bad time to be forgetful.

A California hospital performed surgery on a man and left a surgical towel inside of him. Unable to process food or function properly, the man returned for testing, fearing cancer. Instead, they discovered the man’s surgeon had left a towel inside of him.

This pain was definitely not his imagination.

Even worse than a surgical towel, Daryoush Mazarei’s surgery ended with a ten-inch long retractor left inside of him. What’s more, when he returned to the hospital after suffering tremendous pain, he was told to seek psychiatric care! Eventually he demanded a CT scan and got the retractor removed.

Scottish soldier Ewen MacDonald was sentenced to death by hanging in 1754. According to reports of his execution and post-mortem dissection reveals that, after apparently ‘dying,’ his body was taken to be dissected and, when placed on the table, sat up and begged for mercy. One surgeon then hit him with a wooden mallet, killing him for real.

Catching on fire mid-surgery isn’t usually a concern patients have, but it happened to Janice McCall in 2009. The 65-year-old died six days after being injured in a flash fire during surgery. The cause of the sudden blaze was not revealed in this case.

British serviceman William went in for a root canal, and his memory went haywire.

After the root canal, William was incapable of remembering new information for longer than 90 minutes at a time. In his mind, every day going forward was that same day of the operation: March 14, 2005. Only memories he’d already made remained. So, he got his tooth fixed, but at a uniquely hefty price.

Genetic testing between a woman and her three sons (all of whom she definitively conceived, and gave birth to) revealed that they weren’t her biological children—effectively implying she’d given birth to someone else’s children. Further study revealed the woman was a chimera: a mix of two people (in this case, non-identical twins that fused in the womb)!

A woman was shot by a stray bullet while laying in her hospital bed. While hospitalized for a routine procedure, a bullet flew through her window, piercing two panes of glass, and hit her. According to reports, the bullet may have traveled up to a mile before striking the unknowing patient! She was taken into surgery and stabilized.

H.H. Holmes, one of America’s most famous serial killers, was a doctor.

H.H. Holmes, the deranged mind behind Illinois' “murder castle," was a licensed doctor. He even sold skeletons and organs from his many victims to medical schools.

This ‘doctor’ went on a destructive streak in the 1900s.

Quack doctor Linda Hazzard was responsible for the deaths of at least 14 people under her care after ‘practicing’ at a sanatorium in Washington, where she promoted fasting as a treatment. As a result, numerous patients starved to death, after which she would steal money and worldly possessions from them. She’d never even gone to medical school, but through a loophole in Washington law, was granted a license to practice medicine in the early 1900s.

This man had rocks on his mind.

A Brazilian man suffered from what doctors thought were intense migraines, until they checked his head. It was then that they discovered calcium deposits forming actual rocks in the back of his brain.

The dangers of soy sauce.

A 19-year old Virginia man went into a three-day coma as a result of a soy sauce overdose. After drinking a full quart of soy sauce, he began foaming at the mouth and convulsing. The young man had experienced a condition called hypernatremia—essentially, too much salt in his blood.

In 1982, a series of lethal poisonings swept through Chicago. Someone—an unknown culprit to this day—tampered with a number of Tylenol capsules and laced them with potassium cyanide. Seven people, who took Tylenol for everyday ailments, were poisoned and killed from unknowingly ingesting cyanide.

The first-ever ovariotomy was performed by Ephraim McDowell in 1809. 45 year-old Jane Crawford has been misdiagnosed with twins when McDowell offered an alternative explanation for her predicament: an ovarian tumor. McDowell performed the surgery without any anesthetics or antibiotics and removed a 22-pound tumor from Crawford. Luckily, she recovered well from the procedure and lived to the age of 78!

These people did not live and learn.

Members of the Rhode Island Hospital operated on the wrong side of a patient’s brain…three times in one year. In the first instance, a resident forgot to mark off which side of the brain was due for operation. In the second, a doctor neglected to mark which side of the patient’s brain had a blood clot, claiming to remember. The patient, an 86-year-old man, later died. The third incident saw both the chief resident neurosurgeon and a nurse stating which side of the brain was to be operated on (the correct side) pre-surgery, before proceeding to operate on the wrong side.

The world’s largest tumor ever removed from a human:

A 300-pound tumor was removed from a woman’s abdomen in Palo Alto, California. The surgery lasted for 6 hours, and the woman had to lie on her back during the procedure, otherwise, the tumor would have crushed her.