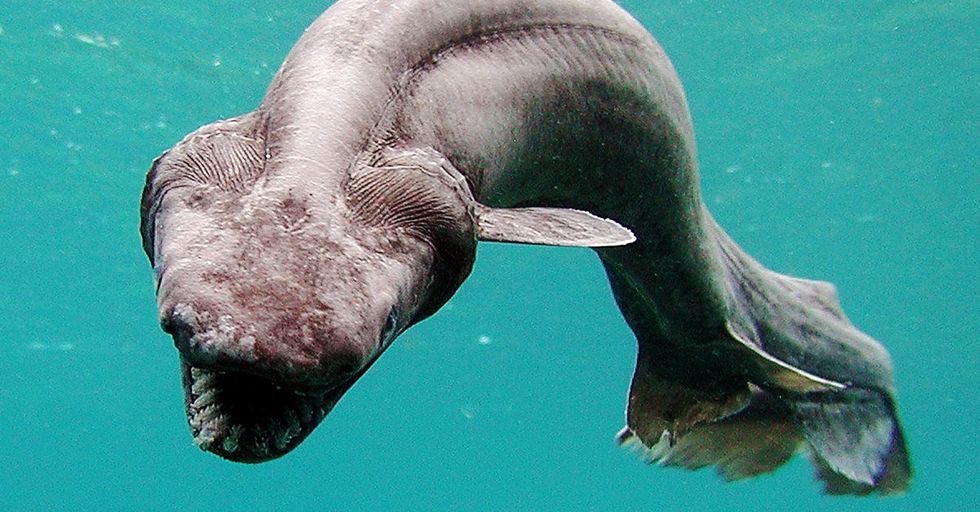 The oceans are some of the scariest, most fascinating places on earth.

In fact, in earlier times, before we developed the technology to peer into their depths, they were a constant source of fear – hence all those myths about sea monsters.

Now that we know definitively what's down there – well, mostly – we have even more cause to be scared.

Here are 11 of the scariest deep sea creatures ever.

The vampire squid squid seems like a creature straight from mythology. Red color, small black eyes, spines lining its tentacles... It's actually anything but.
While very little is known about the squid, we do know a couple of things – it thrives at depths of 600 to 900 metres (2,000 to 3,000 ft), needs very little oxygen, and feeds on detritus – i.e., the bits of organic matter that drift down from the ocean's surface like phytoplankton, bits of dead animals, fecal matter, etc.

Does this creature look ghoulish and spine tingling to you? After all, those spines have got to be sinister, right?
Turns out the spiny red crab, or king crab is a very familiar sea monster. Not only do we enjoy it on our plates at every crab boil, it's very closely related to the hermit crab.

Have you ever seen one of these? Doesn't it seem super scary? It actually shouldn't be. The giant isopod is closely related to the wood lice that burrow through dead trees.
A common oceanic scavenger, these creatures typically live in the very deep sea and eat the flesh of dead creatures. Oh, and they can grow up to 30 inches. Spooky, right?

Often referred to as a "living fossil," the frilled shark represents one of the oldest still-living shark lineages.
As if this isn't impressive enough, the frilled shark is a remarkable predator with a sinuous body, backwards-hooked teeth and those distinctive frilled gills. It also sometimes preys on other sharks – so there's that...

Dragons may not exist, but their close cousins the deep-sea dragonfish certainly do. Feast your eyes on this remarkable and intimidating predator, which lures its prey using light-producing organs called photophores.

Turns out there's spiders under the sea as well... Okay, well maybe not spider spiders, but the sea spider is close enough.
Sea spiders are marine arthropods (invertebrates with exoskeletons), and just like spiders, they have eight legs and can literally suck the nutrients out of their chosen prey. Neat.

Have you ever heard of a chimera – the monster with the head of a lion and the tail of a snake? Yeah, this is definitely not it.
The chimaera is a cartilaginous fish closely related to crabs that lives at the bottom of temperate oceans and preys on shrimp, crabs and other fish.

When you hear the word "stargazer," you think of something pretty or epic, correct? Well the stargazer fish is certainly epic, that's for sure.
This ocean floor dweller is not only an ambush predator that uses its wriggly lure to attract unwary fish, it's also venomous and can use electricity. There's a reason why the stargazer is sometimes referred to as "the meanest thing in creation."

When a fish is literally named fangtooth, you expect it to have a lot of fangs, correct. The fang tooth does not disappoint.
These solitary fish have teeth like a snake's – they ensure captive fish cannot back out. Another similarity they have to snakes? Their stomachs are distensible, which means they can swallow creatures larger than themselves.

The kraken. The leviathan. What do these two monstrous creatures have in common? They were both suspected to have been influenced by sightings of colossal squid. These squid can be 12–14 m (39–46 ft) long and can weigh  up to 750 kg (1,650 lb) – so yeah, waaaay bigger than humans.

The dreaded monsters of the deep, gulper eels can distend their jaws and stomachs to eat fish much bigger than themselves, and can live up to depths of 3,000 m (10,000 feet). Scary.

With a name like that, you'd expect the goblin shark to be a rapacious predator, but no, it just feeds on crustaceans and rattails and dragonfishes. It is very horrifying to look at, though. Chilled by this post? Send it to someone who deserves a good scare.