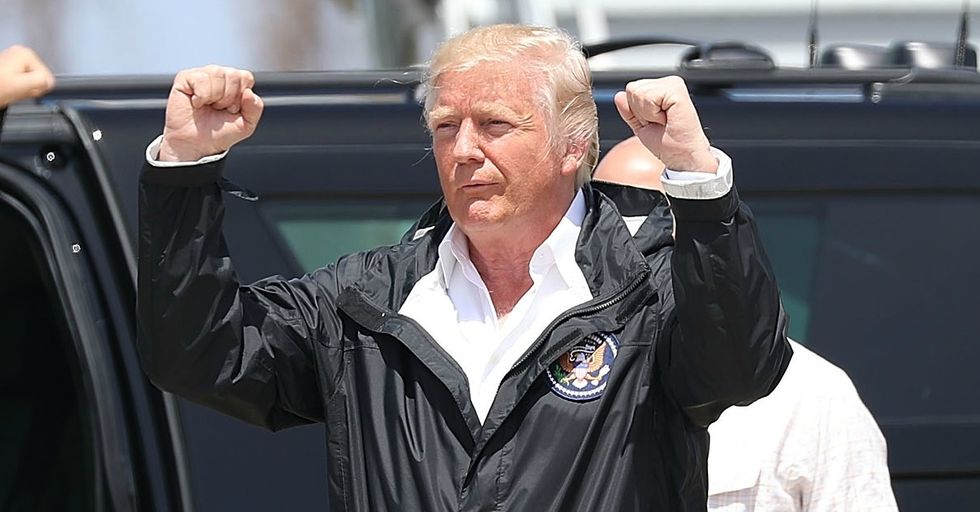 Robin Zlotnick
President Donald Trump walks off Air Force One as he arrives at the Muniz Air National Guard Base as he makes a visit after Hurricane Maria hit the island on Ocotober 3, 2017 in Carolina, Puerto Rico. The President has been criticized by some that say the governmentÕs response has been inadequate.

For the second time in one day, President Donald Trump has stuck his foot in his mouth. Guess it's good he has two feet.

The first time, he referred to the Las Vegas shooting as "a miracle."

This time, he sat across the table from Puerto Rican leaders — who've spent weeks begging him for help — and told them that the U.S. has spent way too much on Puerto Rico and that they should be proud of their low death toll, which is minimal compared to the "real catastrophe" that was Katrina.

It was right before his flight to Puerto Rico on the morning of Tuesday, October 3 that Donald Trump referred to the Las Vegas shooting as "a miracle."

No matter what he was trying to say, the language he used was extraordinarily inappropriate. And Trump didn't seem to learn much during his short flight to the island because when he arrived in Puerto Rico, the things that came out of his mouth there weren't any better.

First, he joked about what this disaster in Puerto Rico is costing.

"I hate to tell you Puerto Rico, but you've thrown our budget a little out of whack," he said, "because we've spent a lot of money on Puerto Rico." He added that it's "fine" because they've saved lives, but holy hell how terrible is that to say? The federal government has faced incredible amounts of criticism for how much aid it would not send to Puerto Rico, even as the Mayor of San Juan begged for more help. These are real people facing real disaster, and Donald Trump spent his time with Puerto Rican officials blaming the island for throwing off his budget.

But he wasn't done yet.

Things got extremely uncomfortable when Trump compared the devastation in Puerto Rico to Hurricane Katrina, which he referred to as a "real catastrophe," implying that what the Puerto Rican people are facing is not one. “If you look at the — every death is a horror, but if you look at a real catastrophe like Katrina and you look at the tremendous — hundreds and hundreds and hundreds of people that died and you look at what happened here with really a storm that was just totally overbearing. Nobody's ever seen anything like this. What is your death count as of this moment?" Trump said before turning to the governor of Puerto Rico. "Sixteen, sir," he replied. "Sixteen, certified," Trump said. "Sixteen people versus in the thousands. You can be very proud." Then he repeated that number — 16 versus thousands in Katrina — once more. Trump said this as if there's a price on human life, as if the fact that 16 people lost their lives means Puerto Rico's disaster isn't worthy of the response — or the criticism – that Katrina was. What a guy.