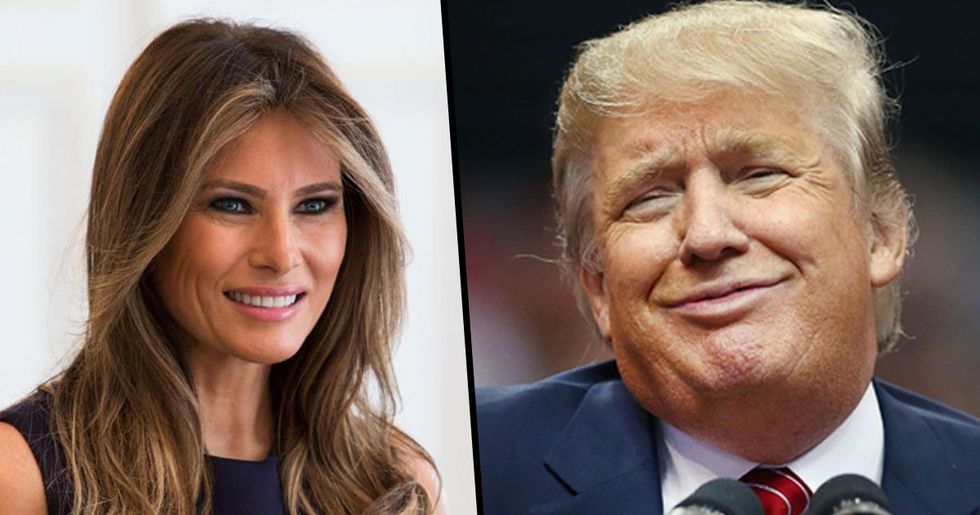 Trump is known for his weird and controversial remarks. We still can't figure out if he actually means them or if he's just spewing out nonsense in order to catch a headline or two, but, either way, he really knows how to ruffle some feathers.

And this time is no different.

I always knew that Trump was a horrible guy, but he's hit an all-time low with this one. Recently, he's been under fire for attacking four congresswomen (of color, obviously), telling them to "go back to their 'broken' countries," even though three out of four of these women were born in the United States and all of them are American citizens. Idiocy at its finest.

Since then, many have pointed out the fact that our First Lady, Melania Trump, has been a U.S. citizen for less time than Ilhan Omar, one of the four congresswomen that Trump told to "go home." One journalist questioned Trump on this very matter and his reaction was interesting, to say the least...

President Donald Trump has made a career from his outrageous remarks.

There seems to be a lack of positivity from the man who rules the States.

You can't keep attacking and attacking, expecting nothing to happen in return. And where would all this drama unfold except for on Twitter?

Trump decided to post a series of tweets in which he attacked "progressive congresswomen."

The tweets seemed to be aimed at Alexandria Ocasio-Cortez, Ilhan Omar, Rashida Tlaib, and Ayanna Pressley, freshmen Democrats, and women of color, because who else was he going to attack?

Why would he do such a thing?

These women have always spoken out against the racist systems within the U.S. as well as Trump's shambolic immigration policies.

Yes, you read that right. Children at the United States border have been separated from their parents and thrown into cages, also known as "Detention Centers."

One congressman, who witnessed the atrocious conditions, tweeted this:

Peter Welch, who represents the state of Vermont, expressed his disgust at what he witnessed as he was exiting border patrol.

I don't know if this is supposed to be some sort of compensation for not being to deliver on the wall...

But I'm sure you'll agree, trapping people in overcrowded cages is not the solution to any crisis, let alone an immigration crisis.

I didn't expect that Trump could go so low.

And now we all have to pay the price. Our nation, which is very firmly being divided by the president, is falling apart.

Comments aimed at the congresswomen have shocked the world.

But, for some reason, I'm not too surprised. If you can be content knowing that there are children trapped in cages, you can easily post a couple of inaccurate and racist tweets. Three tweets, which all followed on from each other, were posted on Sunday aimed at "progressive Democrat Congresswomen." And it's clear that the president forgot to check his facts before tweeting. Wow, shocker!

Let's pick the most "interesting" and inaccurate fact that the president relays here. He writes that these women "originally came from countries whose governments are a complete and total catastrophe." He didn't realize that he shot himself in the foot with that one.

The tea is hot here... Thanks, Ryan (@RyanHillMI), for breaking this one down for us.

Well, if you continue to do such a terrible job as president expect people to tell you how to "run the country." Since he came into power, all we ever hear of is shootings and more shootings. So let's avoid talking about "crime infested" places. I also love that he's using the classic "them-and-us" line in order to shove his racist rhetoric down our throats.

Let's just head into part 3 of the series.

If the United States is the "most powerful" nation, why is it filled with so much corruption? We can't deny the discrimination that is embedded within the system. And, if you can, you're part of the problem. When world leaders such as Trump spew it as part of their own agendas, it becomes deeply rooted in our society. The scariest part of it all is that some people will believe him and promote it his problematic views. We don't realize that we are being brain-washed into embracing hatred.

Many Democrats and at least one former Republican were quick to call Trump out.

Let’s be clear about what this vile comment is: A racist and xenophobic attack on Democratic congresswomen. This *i… https://t.co/8OE5ei5kgr
— Elizabeth Warren (@Elizabeth Warren)1563124848.0

Senator Elizabeth Warren of Massachusetts tweeted this, referring to the President's comments as "vile."

And Ruben (@RubenGallego) explained that he will never be considered "American enough."

Ruben explained that he was constantly told to "go back to Mexico" even though he was born in the US. Even though he had served the country during the Iraq War, in the eyes of the president, he will never be "American enough" because of his Hispanic roots.

Joaquin Castro, who is a congressman in Texas, summed Trump up perfectly for us.

And the congresswomen who were attacked have responded too.

Rashida Tlaib also had something to say.

Want a response to a lawless & complete failure of a President? He is the crisis. His dangerous ideology is the cr… https://t.co/g1kOM25QRJ
— Rashida Tlaib (@Rashida Tlaib)1563114994.0

She referred to the president as a "failure."

And Ayanna Pressley said that she'd continue to fight for separated families.

Ilhan Omar had a powerful message for Trump.

She also added: "You are stoking white nationalism [because] you are angry that people like us are serving in Congress and fighting against your hate-filled agenda. 'America's answer to the intolerant man is diversity, the very diversity which our heritage of religious freedom has inspired.' -RFK."

I think that the president is getting too used to his position, but a king can always be knocked off his throne, especially if that king's out there attacking women who aren't afraid to speak up for what they believe in.

Despite recently fighting within the Democratic party about race issues, Pelosi wasn't having any of Trump's BS.

When @realDonaldTrump tells four American Congresswomen to go back to their countries, he reaffirms his plan to “Ma… https://t.co/3KpG5SSoBm
— Nancy Pelosi (@Nancy Pelosi)1563113780.0

She stood by her younger and more progressive colleagues.

She made her views crystal clear.

She emphasized that, rather than trying to divide a nation, Trump should be working alongside the Democrats in order to find a better immigration solution.

Sometimes, I just wish that Trump would type out these tweets and just save them as drafts, rather than exposing his idiocy to the world. We want to live in a nation wherein peace and equality prevail.

He pointed out that Ilhan Omar, one of the women that Trump attacked in his tweet, had actually been in the country “longer than the first lady."

She is one of the first two Muslim women (along with Rashida Tlaib of Michigan) to serve in Congress. She immigrated to America from Somalia as a child and became a U.S. citizen at the age of seventeen in 2000.

Melania Trump was born in Slovenia.

She became a U.S. citizen one year after she married Trump, when she was thirty-six years old, The Independent reported.

I asked Trump if he would be okay with someone telling the First Lady to go back to her country. He did not answer.
— Weijia Jiang (@Weijia Jiang)1563472169.0

It does seem more than a little hypocritical that Trump willed these non-white, progressive congresswomen to "go back [...] [to the places from] which they came," when he is married to a woman who he most certainly wouldn't want to leave the country - which, by the way, she has every right to be in (as does every other U.S. citizen).

Trump didn't respond, but Jiang was determined not to be ignored by the president.

Update from when Trump left the White House this afternoon. He didn’t ignore the question this time, but he didn’t… https://t.co/rjhScP3Jrl
— Weijia Jiang (@Weijia Jiang)1563568351.0

She asked the POTUS what Melania had to say about the chants that were heard at Trump's campaign rally in North Carolina in which 8,000 people reportedly shouted “send her back!" after Trump spoke of Omar in his speech. As expected, Trump avoided Jiang's question, replying: "Well if you go back into the four congresswomen, the things they've said about our country are terrible [...]." According to Sky News, Trump, regarding the chants at his North Carolina rally, said: "I felt a little bit badly about it. I would say that I was not happy with it. I disagreed with it. But again, I didn't say that. They did. And I disagreed with it." However Trump feels about the situation (and, let's be honest, we're getting pretty mixed signals about that), we're sure that everyone can see the hypocrisy attached to it all. We wonder how Melania does feel about Trump's recent comments...