Trump Claimed His Approval Rating Is the Same as Obama's in His First Year. It Is Not. | 22 Words 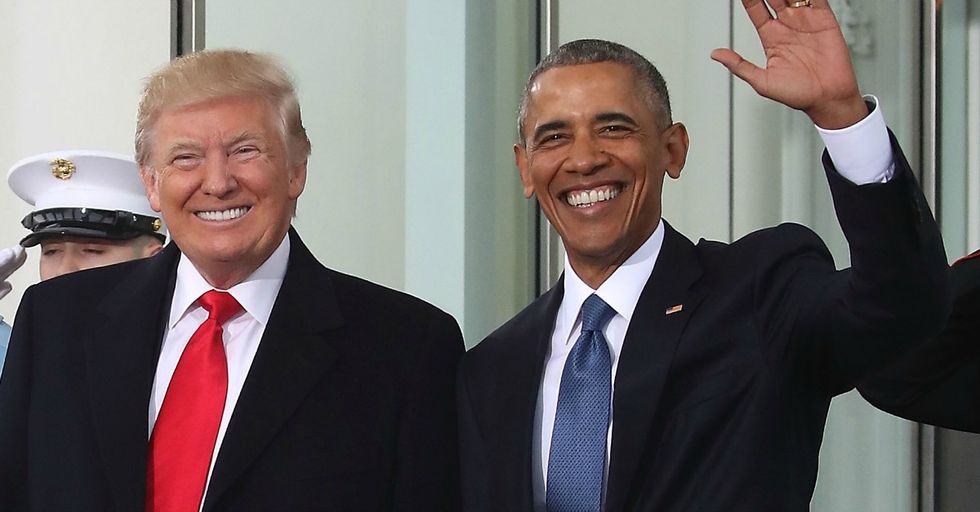 Trump Claimed His Approval Rating Is the Same as Obama's in His First Year. It Is Not.

There are a lot of things that make Donald Trump mad. One of them — though he'd never admit it — is that he can't hold a candle to Barack Obama. Obama was the coolest. The best president, the best dad, the best president dad. Obama is effortlessly suave and charming, super smart and well-read, in love with his gorgeous wife... Donald Trump is none of those things. And somewhere, deep down in the recesses of his bowels, he knows it.

That's why it's so precious that Trump tried to compare himself to Obama in his first year. He claimed they both have the same approval rating, and not only is that laughably wrong, it is so obvious to anyone in the U.S. who can hear and/or see what's going on every single day.

Let's go through some of the things that upset dear old Donald Trump.

We probably can't cover it all. If we tried, we'd be here all week. Trump has started feuds with senators, actors, and newspapers, which is impressive because newspapers aren't even living things.

He really hates the non-existent "War on Christmas."

He purported to be the one who saved the holiday, when in fact, he did the very opposite. He ruined Christmas.

One of the thing that Donald Trump hates the most is being wrong.

He hates being wrong so much that he is physiologically incapable of admitting when he's incorrect. This leads to him often claiming he didn't say words that he definitely said because they are on tape or on Twitter or claiming that he knew all along what the truth was even though he expressed the opposite. It's pathological and insane.

But the thing that Donald Trump can't stand above all else is losing. Being a loser. Not winning.

Trump claims that he's winning all the time. He calls everyone else "losers" and constantly tries to build himself up by tearing other people down. (This is something you have to do if you have zero good qualities but still want to be perceived as a "winner.") But Trump has lost time and again. He's a loser.

And he's especially bitter about how much of a loser he is compared to Barack Obama.

Look at that fake smile! Donald Trump hates Barack Obama so much that he has dedicated his entire presidency to undoing the good that Obama did, even if that means killing millions of Americans who can no longer afford treatment for their medical issues. And yet, Trump just fired off an insane tweet claiming that he and Barack Obama have the same approval rating for their first years in office...

Early in the morning on Friday, Trump blasted off this crazy babbling tweet:

In it, he cites his favorite television program, Fox and Friends, which had just claimed that Trump's current approval rating is 46 percent, a mere one point off from Obama's approval rating in his first year. The really crazy thing is that for a birther who claims to despise Obama, he really wants to be just like him.

The poll to which Trump referred was conducted by Rasmussen, which has come under fire for its right-leaning results before.

It's worth it to mention that the Rasmussen poll is a complete outlier when it comes to approval ratings.

@realDonaldTrump @foxandfriends You’re actually at 37% between all polls, not just the most right swinging one. https://t.co/xQIAfkXXDJ
— Vikki V (@Vikki V)1514559355.0

So Trump was wrong (no surprise here).

Approval ratings might seem petty, but the fact that Trump (and Fox News, for that matter) disseminates such false information to millions of Americans with no qualms about it is the real danger. Let's return to a respect for the truth in the coming year.