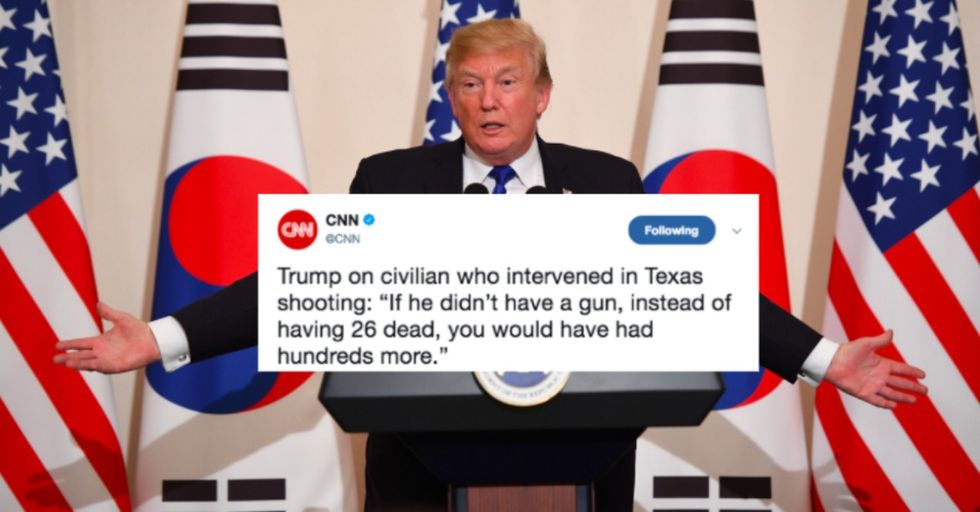 In the days following the mass shooting at a Texas church that left 26 dead, including several children, President Donald Trump has continued to spew his message that now is not the time for gun control. In his early statements about the shooting, he refused to call it a "guns situation," instead laying the blame on a "deranged individual" with a mental health problem. Now, it seems he is not backing down from this position. During a press conference in Seoul, South Korea, the president doubled down on his statements, claiming that if there was stricter gun control, hundreds more would have died that day.

During a press conference in South Korea earlier today, NBC's Ali Vitali asked Trump if he would consider extreme vetting for people who want to buy a gun in the United States.

First, Trump tried to deflect and blame the reporter for asking a question like this when they're "in the heart of South Korea," but eventually he acquiesced and said, "I will certainly answer your question."

"If you did what you're suggesting," Trump said, "there would have been no difference three days ago, and you might not have had that very brave person who happened to have a gun or a rifle in his truck go out and shoot him and hit him and neutralize him."

"I can only say this: If he didn't have a gun, instead of having 26 dead, you would have had hundreds more dead."

Many weren't relieved that "only" 26 people died in a church in Texas, however.

Not to mention, Trump's claim that hundreds more would have died if that concerned citizen didn't have a gun just isn't true:

In a powerful Twitter thread, a vice president of the Center for American Progress Igor Volsky, cited statistics that prove that background checks, this vetting Trump despises, actually does save lives. It's common sense. More guns = more people hurt by them. Fewer guns = fewer children shot to death in churches. What side are you on?