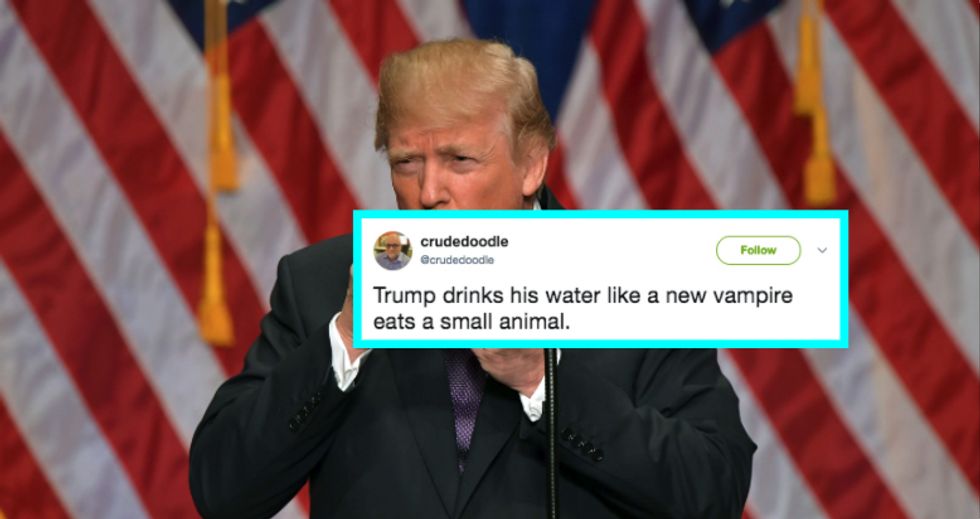 We've all struggled to complete simple tasks before. Some people can't pen an apology without including a recipe for cinnamon rolls, for example (lookin' at you, Mario Batali). Others (coughTedCruzcough) can't seem to figure out how to stop mansplaining all over the dang place. And Donald Trump? Well, Donald Trump struggles with many simple tasks. Like telling the truth. And drinking water.

Yesterday, he failed at taking a normal drink of water — again! You've gotta see the video.

You may remember earlier this year when we first noticed Trump struggling to drink from a water bottle.

For reasons the world has yet to suss out, Donald Trump grabbed that bottle of Fiji water like someone who had never before encountered a bottle of water and drank it in a way we can only describe as...unique.

Normally, the president struggling to keep himself hydrated wouldn't be that interesting. However, many people remembered this similar water bottle gaffe committed by Marco Rubio:

While filming his response to President Obama's State of the Union address, Rubio awkwardly stepped to the side to grab some water and awkwardly chugged it. In the middle of his video.

Trump (who was merely a character from reality TV at the time) gave Rubio a really hard time about the whole thing.

In addition to giving Rubio the above unsolicited advice, Trump continued to mock Rubio for this one moment for years. He tweeted about Rubio and The Water Bottle several times and even sloshed water all over the crowd at one of his campaign events in 2016. He called Rubio a "choke artist." To sum up: Trump was a classic bully. And then he got a taste of his own nasty medicine after making the same awkward mistake.

And now he's done it again! Trump totally failed to drink water like a normal human being again. Watch him here:

This time it was during his speech on national security, and the water was from a glass rather than a bottle. He took the most dainty, delicate sip we've ever seen anyone take.

Tiny hands! Trump has them! We know, we know, it's a joke you've heard plenty of times before. But let's not forget that Trump mocked Rubio's hydration habits for years. We've still got some runway left on the tiny hands jokes. Of course, the Twitter jokes didn't stop there...

This one is great:

We also can't help but be reminded of that scene in Harry Potter and the Sorcerer's Stone where Voldemort kills a beautiful, innocent unicorn and drinks its blood to lengthen his empty life. Now that we mention it, that's sort of a perfect metaphor for what Trump has done to this country!

Or maybe Trump's relationship with water is slightly more Dickensian.

trump drinks water with two hands like hes a damn orphan from oliver twist getting a bowl of soup before going out… https://t.co/t7lZiKIfWV
— Jonna Lareau (@Jonna Lareau)1513636543.0

Before going out to steal money from people, you say! Another apt metaphor!

You can't deny it. There's something distinctly raccoon-y about the way that dude holds a glass of water. Of course, we would never waste our human glassware on such a creature. (Are we talking about the raccoon or Donald Trump? Great question.)

This second water failure is actually another thing that's making people actively wonder about the president's physical and mental state. You may remember earlier this month when Trump appeared to slur his words during a speech.

There was a flurry of speculation surrounding the slurred speech. Some people thought he may have had a stroke. Others contended it was just a problem with his dentures. Either way, it was definitely a weird thing that happened. Compounded with the now two odd water moments, there are some full-blown conspiracies out there.

But as much fun as it may be to make fun of Trump (and trust us — it is), there may be a more benign explanation for Trump's super weird water-drinking method. It's possible that he may have something called an essential tremor, which typically causes a slight shake of the hands. It's not necessarily indicative of a larger mental or physical problem.

Regardless, Trump — who has still not publicly released any medical records — has a physical scheduled for early next year. In the meantime, he may want to consider investing in a sippy cup.