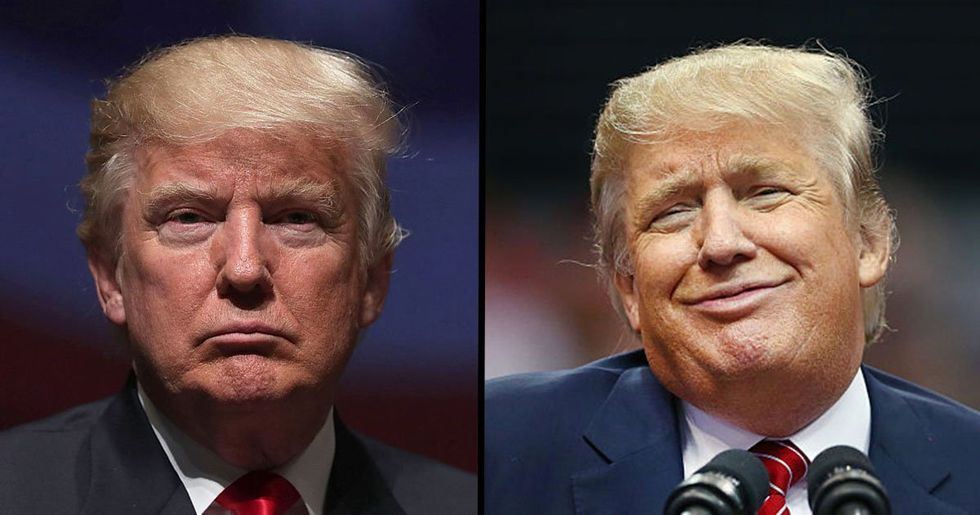 This weekend,  Texas and Ohio suffered 2 devasting mass shootings, which claimed the lives of dozens of innocent people.

On the morning of August 3rd, twenty-one-year-old Patrick Crusius entered a crowded Walmart store in Texas with an assault-style rifle and opened fire in what authorities are calling an act of domestic terrorism. Just thirteen hours later, a gunman in Dayton, Ohio, who was wearing body armor and carrying one-hundred-bullet magazines to arm his rifle, killed 9 people but was later shot by police within thirty seconds of opening fire.

Now, Trump has formally spoken out for the first time since the tragedy-ridden weekend, demanding the death penalty for all mass murder hate crimes as well as condemning "white supremacy."

However, the president has failed to mention any sort of gun control measures and, instead, cited a number of other reasons for these horrific acts of terror other than the, well, easy access to guns.

On August 3, a gunman identified now as the twenty-one-year-old, white supremacist, Patrick Crusius, marched into the superstore at the Cielo Vista Mall in Texas armed with an assault-style rifle and opened fire.

His evil attack has cost at least twenty innocent people their lives.

By the time that the police arrived on the scene, at least twenty people had already been killed, and another twenty-six were severely injured. Crusius surrendered himself to the police and now remains in custody.

His massacre has been treated as a terrorist attack against the Hispanic community.

In El Paso’s population, roughly 680,000 are of Hispanic descent. Shortly before his sickening attack, Crusius is believed to have written and posted an online document calling his massacre a response to “the Hispanic invasion of Texas." The document was posted on 8chan, an online message board frequently used by the far right, and, in it, he described a “cultural and ethnic replacement brought on by an invasion," alluding to Hispanic people in the U.S.

At around 1 am yesterday, twenty-four-year-old Connor Betts, armed with a high-powered rifle, opened fire and killed 9 people, including his own sister, Megan, before being shot dead by police within thirty seconds of his rampage.

Similar to the scenes in El Paso, Texas, a vigil was held for the victims, although angry citizens interrupted the event...

Hundreds of people gathered to pay their respects to the victims, with many leaving bouquets in front of the bars or tucking flowers into bullet holes. At the event, a speech by Ohio’s Republican governor was interrupted with shouts and chants of “make a change." As the governor, Mike DeWine, told the crowd that the families’ pain could not be erased, several heartbroken people started chanting: “Do something!"

But Trump has faced criticism for how he's responded to the back-to-back massacres.

Before formally speaking out about the tragedies, the president tweeted this, along with a few other brief tweets detailing how he had "authorized the lowering of the flags to half-staff at all Federal Government buildings in honor of the victims of the tragedies," and how he and Melania send their "heartfelt thoughts and prayers to the great people of Texas."
Yet there was no mention of gun regulation in any of his tweets.

Many people slammed him for his tweets.

Including singer, Rihanna, who took to Instagram to call out Trump, who failed to even brand the acts as terrorism. "Um... Donald, you spelt “terrorism" wrong! Your country had 2 terrorist attacks back to back, hours apart leaving almost 30 innocent people dead. This, just days after yet another terrorist attack in California, where a terrorist was able to LEGALLY purchase an assault rifle (AK-47) in Vegas, then drive hours to a food festival in Cali leaving 6 more people dead including a young infant baby boy," she wrote. Highlighting the harsh reality that the president only ever seems to ignore, the star went on to write: "Imagine a world where it’s easier to get an AK-47 than a VISA!"

And it seems like a lot of other people felt the same way.

Like this user, who called for the president to resign after his failure to do anything about the mass of automatic weapons available in the country.

During his speech, he called on the United States to condemn racism and white supremacy as “one voice" after the weekend's devasting events.

"Today I am also directing the Department of Justice to propose legislation ensuring that those who commit hate crimes and mass murders face the death penalty and that this capital punishment be delivered quickly, decisively," the president said.

But he also found many things to blame the massacres on, other than, well, guns...

One of which was the usual scapegoat, mental illness. “Mental illness and hatred pull the trigger, not the gun," he said. He had also tweeted about mental illness being the main component of the shootings, writing: "This is also a mental illness problem, if you look at both these cases … both these people are very ill." As of yet, there has been no confirmation that either shooter had mental health issues.

He also managed to tie immigration to the attacks.

We have no idea how he is connecting the 2 issues, but before his formal address, the president tweeted about "desperately needing immigration reform," despite both shootings being carried out by U.S citizens.

He claimed that video games had a part to play too.

The president blamed "gruesome and grizzly video games" for the "glorification of violence in our society," adding that "the perils of the internet and social media cannot be ignored and will not be ignored."

But no mention of guns?

Whether it's the "fake news" media, immigrants, video games, or social media, Trump seems to cite a lot of reasons for the mass shootings, without ever blaming the weapon itself. After all, like Rihanna said, in a country where it's easier to get a gun than a visa, maybe its time to actually make a change.

In fact, many people think that Trump is to blame for the attacks.

Many critics have argued that the roots of the two massacres lie in the president’s language about immigrants and Mexicans in particular and his opposition to gun control.

How many innocent people need to die before gun legislation changes?

And, quite frankly, people want action.

In light of the massacres and, of course, the president's reaction, people have taken to the streets to protest gun violence, once again.

Presidential candidate, Senator Amy Klobuchar, pointed out that mental illness is not the issue at hand.

The presidential candidate Senator Amy Klobuchar of Minnesota said: “Mental illness rates [in the US] are similar to other countries across the world but we have these shootings in extraordinary numbers, and that’s because of the weapons [available]." It doesn't seem like rocket science.

And, of course, people flocked to social media to slam the president following his controversial speech.

@realDonaldTrump They are just doing the work you told them to do via your tweets and "press conferences." They sa… https://t.co/lm2F5ziI4s
— Brian J Wrights (@Brian J Wrights)1565008501.0

"They are just doing the work you told them to do via your tweets and 'press conferences.' They saw your wink and nod and acted on it," one user wrote.

Many also branded his speech "insincere."

I don’t know who needs to hear this but condemning white supremacy in a speech isn’t proof Donald Trump has changed… https://t.co/ALmQwkmNBt
— Jemele Hill (@Jemele Hill)1565022739.0

Like this user, who warned people not to be fooled by the president condemning white supremacy.

Now, Ohio and Texas are left mourning over the weekend's heartbreaking attacks.

As the victims of the attacks are slowly being identified, it has come to light that, among the deceased in Texas, are parents, Jordan and Andre Anchondo, who were both shot as they shielded their 2-month-old baby. The couple gave their lives to protect their child and have heartbreakingly left behind 3 children.