Trump Denied Being a Feminist Faster Than He Denounced Nazis, and That's a Huge Problem | 22 Words 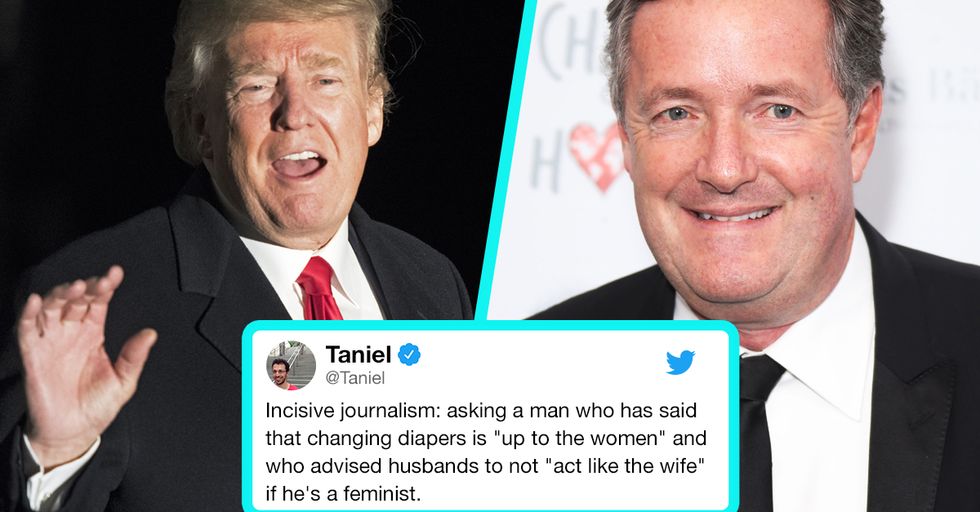 Trump Denied Being a Feminist Faster Than He Denounced Nazis, and That's a Huge Problem

You know when you read a headline so ridiculous that you immediately check to make sure you haven't stumbled across a satirical site? That happened to me this morning.

For whatever reason, the media machine decided to report on the "breaking news" that Trump is not a feminist.

It was almost like picking up your newspaper and seeing the headline: Sky Is Blue! or Beyoncé Slays It Again Today!

But what's really shocking is not the fact that Trump claims he's not a feminist. It's the fact that he said it immediately, whereas he's taken much longer to deny other things that are significantly more problematic than the belief that women deserve equal rights.

Trump's "stunning" admission occurred in an interview he did with Piers Morgan.

Morgan has, in the past, referred to himself as a friend of Trump's. In fact, he kicked off the interview — which was Trump's first international TV interview — by saying, "I've missed you, Mr. President." (Which, incidentally, is exactly how I would greet Barack Obama if I were ever given the chance).

The only reason to preface that statement with "BREAKING NEWS" is if Morgan meant it to mean "I AM BREAKING NEWS AS YOU UNDERSTAND IT. NEWS IS BROKEN NOW. IT IS NO MORE." Anyway, shocker of shockers, Trump says he's not a feminist.

My favorite definition of feminism comes from Marie Shear, who said: "Feminism is the radical notion that women are people." It doesn't mean you're out there burning every bra in sight, or that you hate men, or any of the other fearmonger-y myths that get spread about feminists. There's only one reaction to the "news" that Donald Trump does not consider himself a feminist. I'm gonna let Michelle handle this one:
For real. There are not enough eyeballs in the world to roll at this "news." Were I Argus, the mythological giant with 100 eyes, I still would not have enough eyes to roll. Not even the Jim Henson Creature Shop — which literally has drawers full of eyeballs — has the number of eyes you'd need to roll in order to adequately communicate how ridiculous this news is. You get what I'm saying here, right?

Remember when Howard Stern asked Trump whether he could refer to Ivanka (Trump's daughter) as a "piece of ass"? And Trump said yes?! Look, I don't need to list off all the times Trump has been truly awful toward women. You know about them. You've read about them. We've all been living in this darkest universe together. What I find truly interesting about Trump's statement against feminism is not the fact that he declined the label. It's that he declined it immediately. There was no hemming and hawing. I couldn't help but be reminded of another time Trump was asked to deny something and acted with significantly more hesitation...

Yep, I'm talking about White Supremacy, and Trump's apparent inability to condemn it.

Here's a video of how that went down:

"I have to look at the group. I don't know what group you're talking about. You wouldn't want me to condemn a group I know nothing about!" said the man who would go on to be elected President of the United States of America. He did later go on to "disavow" Duke's endorsement. But that wasn't the end of it.

After the horrific attack in Charlottesville on August 13, 2017, Trump again hesitated to denounce the White Supremacists who were responsible for the violence. You'll remember this infamous statement:

Trump claimed that there was "violence on both sides" and that both parties were to blame. Obviously, our president seems to have a bit of a problem with decrying the actions of others.

But is immediately ready to answer the question "Are you a feminist?" in the resounding negative.

But why? Why would someone demur when asked to decry the actions of Neo-Nazis but instantly clear up any confusion about how he feels about women? You know what they say. If it walks like a duck, talks like a duck, and doesn't make it abundantly clear that it has any problems with Neo-Nazi ducks...well, that's not a duck you want leading your country.
Ultimately, the fact that Trump immediately answered that he's not a feminist says a lot more about him than it does about feminism. As a feminist, and someone who doesn't care to associate with the pals of Neo-Nazis, I couldn't be more thrilled to not have him on my team.