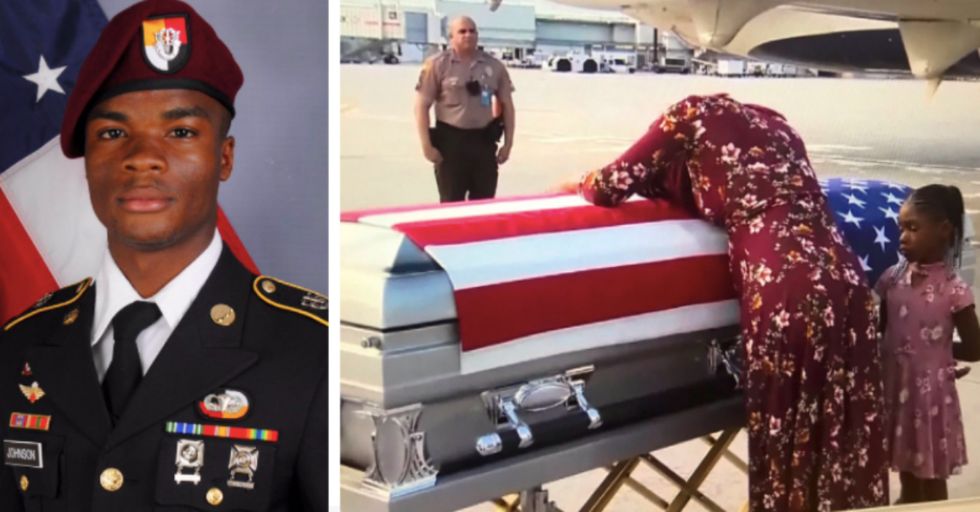 Donald Trump has said a lot of truly horrible things. Just when you think you've heard the worst comment a U.S. president could ever make, he manages to exceed expectations and say something even more awful. The horrifying comments he made to a grieving widow yesterday are sure to break your heart.

Sgt. La David Johnson was one of four soldiers killed in an ambush that took place in Niger on October 4.

Johnson was 25 years old. He is survived by a 2-year-old son, 6-year-old daughter, and his wife Myeshia, who is currently pregnant with their third child.

Yesterday, Johnson's family gathered at Miami International Airport to receive his remains. While the family was waiting at the airport, they received a phone call from the president. Congresswoman Frederica Wilson accompanied Johnson's widow and claims to have overheard part of the president's call. Here she is talking about what Donald Trump said:

According to Wilson, Trump told Johnson's widow that her husband "must've known what he signed up for." "This man has no feelings for anyone," Wilson later claimed. "This is a young woman with child who is grieved to her soul."

It's impossible to imagine a scenario in which Trump's comments would have been appropriate. There seems to be no limit to just how completely he can miss the point of any given situation.

Earlier this week, Trump had the audacity to claim that former presidents didn't call the families of fallen soldiers. First of all, his claims were completely false. Secondly, what's worse? Not calling at all, or calling only to say, essentially, "Well, what did you expect?" In the wake of Johnson's death, a GoFundMe campaign has been set up to help with his children's future education expenses. That's how you respond to a tragic situation. Perhaps our president could take notes.

This morning, when Trump found himself (yet again) in hot water for the asinine comments he'd made, he tweeted that Congresswoman Wilson was lying:

He even claims to have proof that he never told Sgt. Johnson's widow that her husband knew what he signed up for.

But he doesn't have proof.

All he has is the complete inability to filter his thoughts and a position of power that gives him opportunities to hurt people with those thoughts. A veteran named Brandon Friedman took to Twitter to explain that, in fact, Johnson did not sign up to die. His thread (included in its entirety in the following pages) is incredibly informational and moving:

"Let's talk for a minute about 'he knew what he signed up for,'" Friedman began.

2. There's often a misconception among non-veterans that service members sign up with the expectation that they may die.
— Brandon Friedman (@Brandon Friedman)1508297354.0

6. But when things *do* get dicey, troops expect leaders (at every level) to do everything in their power to keep death from happening.
— Brandon Friedman (@Brandon Friedman)1508297574.0

8. Instead, DoD designed MRAPs. It was a concerted effort to keep more people from getting killed unnecessarily.
— Brandon Friedman (@Brandon Friedman)1508297684.0

(Friedman's comments are continued on the next page.)

16. More importantly, it sends this message to troops: If you're looking for support from the White House, you know what you signed up for.
— Brandon Friedman (@Brandon Friedman)1508298118.0

Ultimately, telling someone "you know what you signed up for" is the ultimate way to avoid taking responsibility when something goes wrong. Our troops need the support of the entire country — including the president. Instead, they have a Commander in Chief who shrugs his soldiers, passes the buck, and then tweets about how amazing he is.