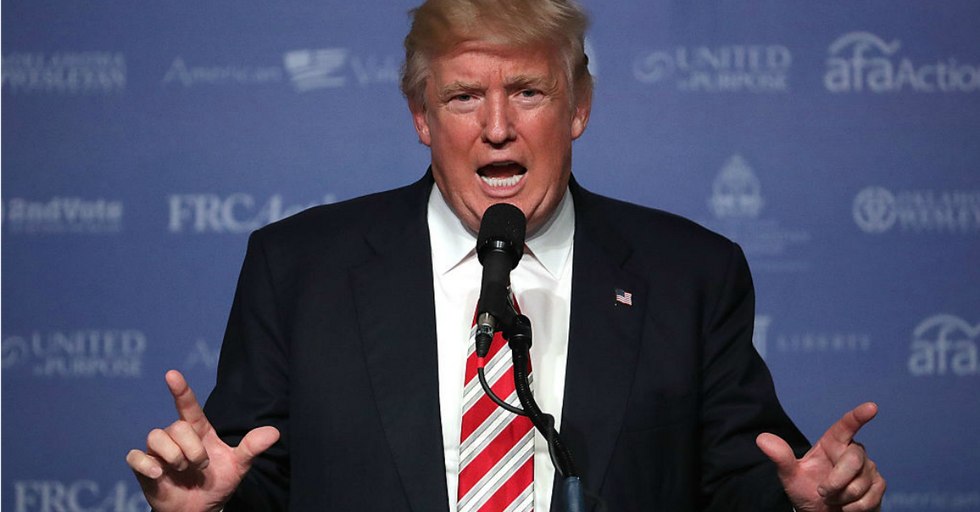 On Friday, President Trump became the first sitting U.S. president to speak at the Values Voter Summit in Washington, D.C.

The summit is hosted by the Family Research Council, which the Southern Poverty Law Center has designated as an anti-LGBT and anti-Islam hate group. If there's one thing Trump knows how to do (and honestly, we're still not sure there is), it's play to the religious right. So that's exactly what he did on Friday.

During his speech at the Values Voter Summit, Trump said that "we are stopping cold the attacks on Judeo-Christian values."

He then went on to talk about how people are afraid of saying "Merry Christmas" because it's "not politically correct." "Well, guess what?" Trump asked his audience. "We're saying 'Merry Christmas' again." The crowd went wild. They were probably thinking something along the lines of this: "Finally! Someone is protecting the Judeo-Christian values we all care about so much." Yeah. About that.

"Merry Christmas!" isn't really a big thing with the Judeo half of Judeo-Christians.

On account of how Jewish people don't celebrate Christmas. Because Christmas is a Christian holiday. Do we really need to explain this one? (Actually, the term "Judeo-Christian" is all kinds of problematic on its own. People mostly say it when what they really want to say is "Christian" but still want points for being inclusive. But not, like, Muslim-inclusive.)

People were quick to point out that Trump himself could use a lesson in the values he's claiming to defend.

Seriously. Which part of that immigration ban was inspired by Abrahamic religions? How about leaving the people of Puerto Rico to die in the wake of a devastating hurricane? Is that something we all missed in Bible class? Where does that whole "grab them by the p***y" thing come in? 1st Corinthians? Or...

Oh yeah, also, there IS no war on Christmas.

Anyway, it's not even Halloween yet. Let's defend one holiday at a time, eh?

If we're going to declare war on anything holiday-related, let's focus our efforts on taking down that Christmas creep together.
20%