Piers Morgan tweeted out his incredulity at Trump's statement. | 22 Words 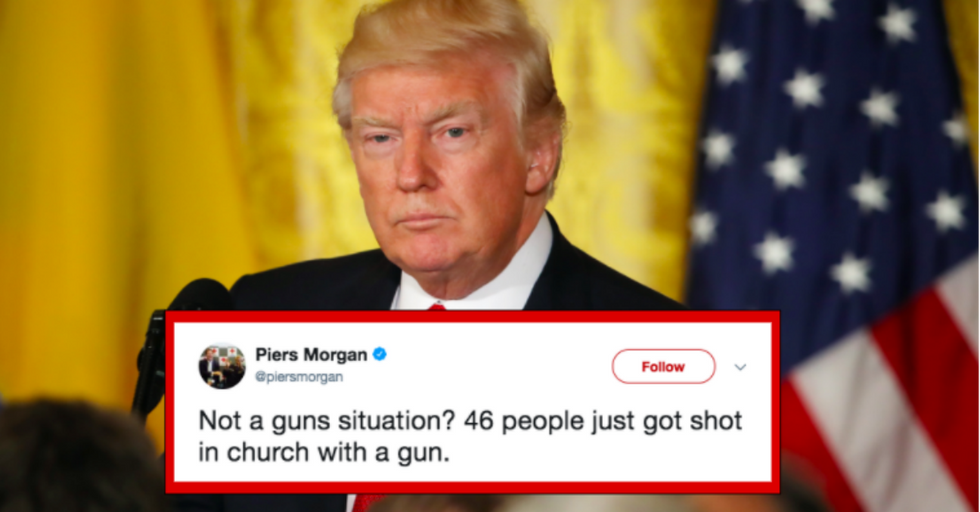 At least 26 people died when a gunman opened fire on a church in Sutherland Springs, Texas on Sunday, November 5. Still, Trump said that the worst mass shooting in Texas modern history is "not a guns situation." The same man who days ago called for the death penalty for the man who plowed a truck into pedestrians in New York City, killing eight, won't even acknowledge that a larger issue of a lack of gun control contributed to the mass shooting of more than 40 people by one man with a gun.

Instead, Trump diverted the conversation that must be started about gun control to one about mental illness (which he's not doing anything to help either, by the way):

In the wake of the news about the Texas church shooting, a reporter asked Trump what policies he would support to reduce violence like that. This was his response: "I think that mental health is your problem here." He calls the shooter a "very deranged individual" who had "a lot of problems over a long period of time." We know what you're thinking: Then how did he get a gun?! Trump continued, actually saying the words, "This isn't a guns situation. I mean, we could go into it, but it's a little bit soon to go into it ... This is a mental health problem at the highest level." We know what you're thinking: Soon? There have been almost 400 mass shootings in 2017 alone. It's beyond too late.

Former White House Press Secretary Sean Spicer for some reason thought it would be a useful thing to express that he agreed with the president:

@GMB exclusive with Trump's former press sec @seanspicer 'I agree with the President this isn't a gun issue this individual had problems'
— Charlotte Hawkins (@Charlotte Hawkins)1509953050.0

Not to mention, Trump using "mental health" as a scapegoat doesn't work at all.

If Trump really believed that mental health was the real story behind the Texas church shooting, he wouldn't have rolled back gun checks for people with mental health issues. He wouldn't have tried to gut the entire American health care system. He would have supported those checks. He would have made sure that everyone with a mental illness had access to the help that they needed. But he doesn't actually care about people with mental illnesses. He only cares about retaining the support of the NRA.

The reactions to Trump's statement about the Texas church shooting reveal numerous inconsistencies and prejudices in Trump's rhetoric and beliefs:

Why does the man who plowed into eight pedestrians in NYC deserve the death penalty but the man who shot dozens more in a Texas church simply suffer from a mental health problem? We'll give you one hint: The man in the NYC's attack is an immigrant named Sayfullo Saipov, and the Texas shooter was a local resident named Devin Patrick Kelley. Need another hint? Donald Trump is racist.

There's another pesky fact that proves this mass shooting is — like all other mass shootings — an issue of guns:

Some of the deadliest mass shootings in this nation's history would not have been possible if the shooter hadn't obtained a semi-automatic rifle. End of story. If AR-15s were not available to the Las Vegas shooter or the Sandy Hook shooter or the Sutherland Springs church shooter, fewer people would be dead. That is what we call a pretty solid "guns situation." Several famous people threw their reactions to Trump's comments out there, including one very surprising one...

Piers Morgan tweeted out his incredulity at Trump's statement.

And we actually agreed. We agreed with Piers Morgan. Hell has officially frozen over.

Connecticut Senator Chris Murphy also made a powerful statement following the shooting. Murphy has been an extraordinarily strong voice for gun control since Sandy Hook, which happened in his home state.

"The paralysis you feel right now — the impotent helplessness that washes over you as news of another mass slaughter scrolls across the television screen — isn't real," Murphy said. 'It's a fiction created and methodically cultivated by the gun lobby, designed to assure that no laws are passed to make America safer, because those laws would cut into their profits... "None of this is inevitable. I know this because no other country endures this pace of mass carnage like America ... As long as our nation chooses to flood the country with dangerous weapons and consciously lets those weapons fall into the hands of dangerous people, these killings will not abate." Make no mistake: The blood of every mass shooting is on the hands of the leaders we elected to protect us who chose instead to follow the money. They don't care about you or your loved ones. They only care about themselves.