Trump Dumping Fish Food in a Koi Pond Outraged the Internet, but Is It 'Fake News'? | 22 Words 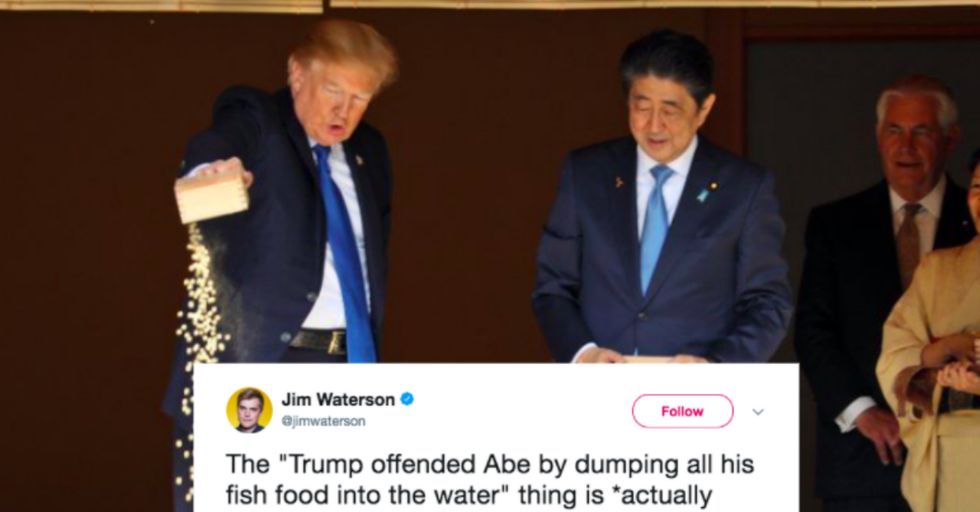 Trump Dumping Fish Food in a Koi Pond Outraged the Internet, but Is It 'Fake News'?

It's no secret that Donald Trump acts like a toddler. So it was natural to believe that when he was seen dumping a bunch of fish food into a koi pond in Japan, it was...not what he was supposed to be doing.

Trump is on a five-nation tour of Asia. During his visit with Shinzo Abe, the prime minister of Japan, the two world leaders decided to take a moment to feed the fishies in the koi pond of the Akasaka Palace in Tokyo. Both men were handed a box of fish food with a spoon, and they started sprinkling fish food into the pond slowly, like adults. They quickly lost patience, however, and since they are heads of countries and have a lot to do, they decided to quickly dump out the rest and return to their discussions of foreign affairs (which we assume is just Trump asking Abe where all the best Japanese golf courses are).

This seemingly minor overfeeding of the fish instantly became a point of Internet outrage, but was it warranted?

The infamous Trump Dump was caught on camera, and it immediately spread like wildfire across the barren wasteland that is Twitter.

The photo appears to show Trump dumping all the fish food out at once while Rex Tillerson laughs and Shinzo Abe respectfully holds onto his own box.

Whenever Trump seemingly screws up, Internet outrage isn't far behind.

To be fair, about 99 percent of Trump's "seeming" screw-ups turn out to be real, horrible screw-ups with actual devastating consequences. In comparison, overfeeding a few koi — and possibly disrespecting the entire nation of Japan — honestly still seemed pretty minor.

But it turns out the fish food debacle was "fake news."

That's right, folks. For once, Trump's childish behavior wasn't brought on by his utter impatience for the societal conventions that go along with being an adult human with responsibilities.

Turns out, he was just copying the prime minister of Japan, who dumped his food first. And yes, there's video to prove it:

Oh, so if Shinzo Abe dumps all his fish food in the pond, what, Donnie, you're just also going to do that? Would you jump off a bridge if your friends did it first? Don't answer that. And get off that ledge, Jared. Let's also take a second look at the video. We imagine Abe's internal monologue went a little something like this: Oh yeah, we're just going to feed some fish. No biggie. Wait, look at me. I'm a grown man, standing next to Donald Trump, spooning fish food into the water. Oh god, I can't do this anymore. How do I—I have to get out of here. This must stop. Bye bye, fish food!

So no, Trump isn't a petulant toddler because he lost his patience and dumped a bunch of fish food in a pond. That's fake news.

The "Trump offended Abe by dumping all his fish food into the water" thing is *actually fake news* for once. https://t.co/wCCn0JvJGT
— Jim Waterson (@Jim Waterson)1509964671.0

The truth is, Trump's a petulant toddler because he blindly repeated the actions of the man standing next to him with no reflection on the consequences that could befall him.