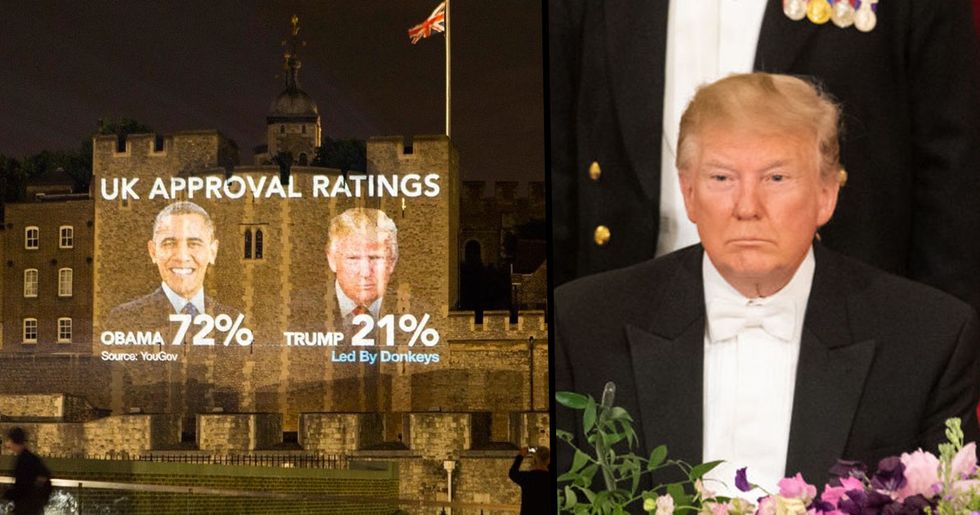 Unless you've been living under a rock for the past twenty-four hours, you'll be aware that President Trump has embarked on his highly-anticipated state visit to the United Kingdom.

The Brits have never been ones to beat around the bush, and they have always made their thoughts on Trump quite clear... They're not his biggest fans, to say the least. So the President's presence in their country was always going to be responded with some controversy.

And one rebel group have gone to extra efforts to make their thoughts on the President's visit heard loud and clear... by projecting incriminating images and Twitter screenshots on famous London landmarks. Not the warmest of welcomes, is it?

The projections, which were projected onto famous spots like the Tower of London and Madame Tussaud's, were hastily removed, but not before they went viral online for the world to see.

We have always had a close relationship with the UK.

We have no closer ally than Great Britain... so it is mildly worrying that the British public now seem keen to boot our leader out of their country, a mere 2 seconds after touching down on their soil.

His first official State visit hasn't been a warm one.

Like the weather there, the majority of the UK's response to Trump's arrival has been cold and frosty. Thousands of protesters took to the streets of London today to voice their anger towards the President and his relationship with their country.

The "Trump Baby" has already made a reappearance...

We can't forget the famous #TrumpBaby, can we? Though it is viciously mocking and degrading our President, I have to admit that it is quite uncanny. Last year, during his official visit to the UK, a giant balloon depicting Trump as an angry baby was erected and flown over Parliament Square in London.

The baby was flown high again this year.

There's no more fitting occasion to dig the baby out, is there? In traditional British fashion, with the "Trump Babysitters" in tow, the Trump Baby was erected into the rainy skies once again.

The British public have taken to Twitter to showcase their other creative protest props.

There's no better place than Twitter at times like these. The Brits like reimagining our President as a cranky toddler, don't they? I can't think why...

Art can come in all shapes and sizes...

And there's this guy, who went to the effort to make toilet paper emblazoned with Trump's face. So, when you use it... actually, I'll let you use your imagination for the rest.

And some excellent Photoshop efforts over here.

Some people obviously have too much time on their hands.

Long story short, the Brits aren't too pleased with the presence of President Trump.

And they've gone out of their way to make sure that he knows about it. There is one group, however, who took things to a whole new level. We're talking a defacing-famous-London-landmarks level, here.

The group in question have been identified as campaign group, Led By Donkeys.

Led By Donkeys started out as an anonymous anti-Brexit campaign group. They are well-known for travelling around the United Kingdom and defacing billboards and buildings with Brexit propaganda... mainly with politicians' Tweets, to be specific.

They have been known to humiliate controversial politicians.

Like the UKIP leader, and good friend of Donald Trump's, Nigel Farage.

So they obviously weren't going to hold back with Trump.

The campaign group tagged Trump's official Instagram and Twitter in a number of posts that openly mock and humiliate the president. Their first stunt emblazoned Trump's approval rates alongside the notably higher rates of previous President, Barrack Obama, across the Tower of London. Ouch. Their Instagram post read, "Hi @realDonaldTrump. Just so you know, you’re wildly unpopular here in Britain. SAD! People REALLY don’t like you (though they love @BarackObama). Hope you like seeing your FAILING approval numbers projected onto the Tower of London".

They then referenced one of Trump's longest-standing feuds.

Their second stunt trolled the President with a giant red cap labelled with "USS John McCain". Talk about swimming in dangerous waters... Their post casually taunted him with, "Hey @realDonaldTrump, we read the story about the sailors on a US warship being ordered to hide from you because you’re triggered by the name on their hats. So we turned Madame Tussaud’s into a giant USS John McCain baseball cap​". Well and truly triggered.

They didn't stop there, however.

The group clearly couldn't resist slapping up a few of their trademark "Giant Tweet" billboards. Featuring a larger-than-life version of Marco Rubio's incriminating tweet, they captioned the post with "Hey @realDonaldTrump, we've put up billboards across London to let you know what people in your own party REALLY think of you". So. Much. Shade.

And, of course, there was that quote...

With our President's current Twitter record, it would be silly of them not to include some of his own tweets, wouldn't it? Well, this one wasn't actually a tweet. But the group have also been known to turn real-life quotes into tweets, so, of course, they were going to include this awful one.

But we thought that we'd save the best till last...

Trump has struck a new friendship with British Politician, Boris Johnson. However, the group couldn't resist showing a video of Boris saying some mean things about our President. Oh, and did I mention that the full thing was projected across Big Ben? That one had to hurt.

And they had no subtlety in the caption.

To accompany the video, they wrote: "Hey @realDonaldTrump, you just endorsed your Brexit buddy @BorisJohnson but he said some VERY NASTY things about you and he doesn’t want you to know. So we projected his words onto Big Ben. Watch with the SOUND ON".

In the mass-projected video, Boris doesn't hold back on the President.

In the clip, Johnson is heard stating, "Donald Trump’s ill-informed comments are complete and utter nonsense. I think he’s betraying a quite stupefying ignorance that makes him frankly unfit to hold the office of President of the United States". Not a nice thing to say about your friend...

Boris continued slating his new buddy, saying, "I would invite him to come and see the whole of London and take him round the city but I don’t want to expose Londoners to the risk to any unnecessary risk of meeting Donald Trump". Burn.

Both the weather and the reception has been a bit rainy for the President, to say the least. Though, last night, he did get to enjoy a royal banquet in Buckingham Palace. That can't have been too shabby, could it?

Even his arrival into the country was tainted.

One young Brit went to extreme lengths to make sure that Trump had a truly British welcome... while still airborne. The guy in question painstakingly mowed a giant penis with the message "Oi Trump" and an important statement on climate change. To make this story even better, it was directly under the flight path for Stansted Airport, where Trump was forecast to land. Brilliant. Read about it here!