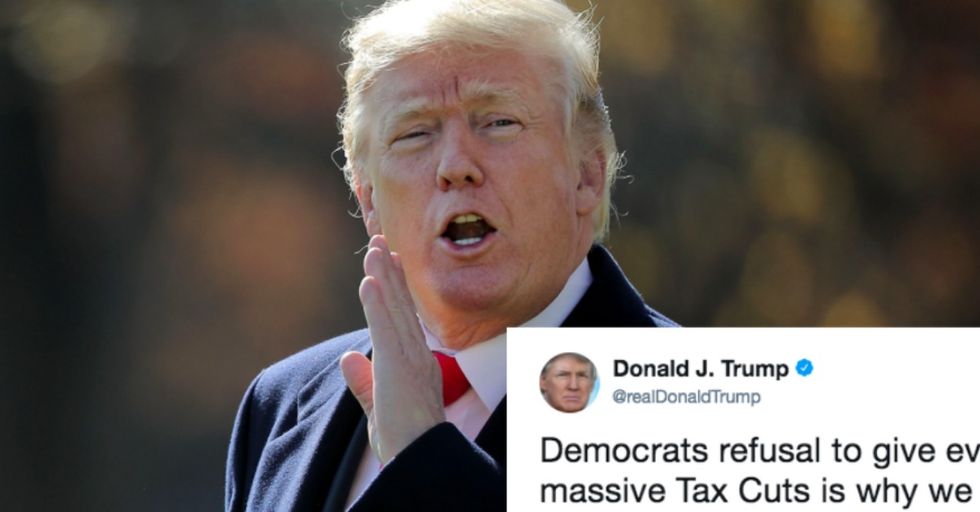 Donald Trump's Twitter has been a matter of national concern since even before he was elected President of the United States. But now, more than ever, Trump is using that platform to spew lies, conspiracy theories, and harmful notions with little regard to the consequences they could have.

One of the conversations he's unfortunately chimed in on is the race for the Alabama Senate seat. Republican and pretty much confirmed pedophile Roy Moore is running against Democrat Doug Jones. And while Trump has been tip-toeing around his view of Moore, this morning, well, he just came out and said what he thinks of the guy.

A primer: This guy below is Roy Moore. He is currently running for the Alabama Senate seat.

In addition to being a backward-thinking Republican who refused to debate his Democratic opponent because Moore believes he's too accepting of transgender people, he's also a child molester. Yes. More than nine women have come forward with allegations of assault and harassment against Roy Moore. They were teenagers at the time, and Moore was in his 30s. This makes him a child molester.

Donald Trump has until now been oddly quiet in the face of these accusations.

He had sort of hinted at the fact that a Democrat would be bad for Alabama, but he hadn't come out and addressed the allegations or taken a firm stance one way or another about Roy Moore. Hmm, maybe it's because he's afraid that if he did, others might bring up the dozens of women who've accused Trump himself of assault and rape, one of which was a 13-year-old girl. Hmmm.

But while Trump has been silent on Moore, he's been clanging pots and pans in nearly every other corner of the news cycle.

When it was revealed that Matt Lauer had been fired from NBC following a complaint of sexual misconduct, Trump used it as an opportunity to spread an unfounded conspiracy theory about an unsolved murder that implicated MSNBC host Joe Scarborough. Whatta guy.

Then, he may have actually admitted to committing an egregious crime when he tweeted this:

If Trump fired Flynn because he knew that he lied to the FBI, that is obstruction of justice, my friends. This was already shaping up to be a banner week for Trump Twitter Oopsy-Daisies, and then it got even better.

Last week, Trump noted that it "would be BAD!" if Schumer/Pelosi (a.k.a. the Democrats) won the Alabama Senate seat race.

That seemed to imply that the president was endorsing Roy Moore, noted child molester, as we saw before. But he didn't actually say it. Then, he tweeted this this morning...

There you have it, folks.

"We need Republican Roy Moore to win in Alabama." That's a ringing endorsement for pedophilia if we ever heard one.

Then, the president doubled down.

This left pretty much everyone begging the question:

It certainly seems like it. But honestly, would we expect anything more from Donald Trump, our President of the United States?

But that certainly doesn't seem to be the case anymore! In fact, Trump proved with his tweet this morning that this Senate seat is worth more than at least nine children. So...yeah. America 2017, everybody.

It would save everyone a good spot of trouble if Trump would:

But that's not likely to happen. Look, Trump may have endorsed a pedophile this morning, but at least he may have also admitted to obstructing justice. You have to look at the silver lining, folks. The silverest of silver linings.