Here's What Trump Is Talking About Instead of the Fact That 3.4M Americans Have No Electricity | 22 Words 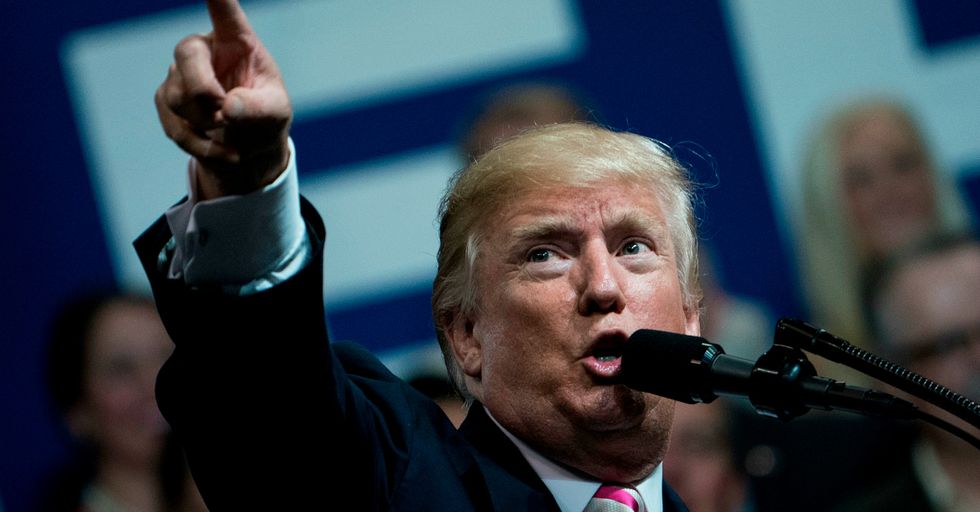 Here's What Trump Is Talking About Instead of the Fact That 3.4M Americans Have No Electricity

You're probably aware that in the past few weeks, Hurricane's Irma and Maria wrecked the island of Puerto Rico, leaving buildings razed, people dead, and millions without electricity, with no clean water, and with dwindling food supplies.

You might also be aware that Puerto Rico is a U.S. territory, making more than 3.5 million residents of the island citizens of the United States.

You are definitely privy to the fact that our President, Donald Trump, likes to tweet. A LOT. And he tweeted a whopping 17 times between Saturday and Monday. But how many of those tweets were expressing sympathy or support or pledging resources to help the people of Puerto Rico?

Let's take a look at he chose to tweet about instead.

Trump pulled a "You can't quit. I'm firing you!" by rescinding Golden State Warriors point guard, Steph Curry's, invitation to the White House, after Curry was like, "No thanks. I don't want to come."

Meanwhile, the people of Puerto Rico are wading through waist-deep water.

Not to mention the entire island has no electricity. Puerto Rico is effectively cut off from the rest of the world and the U.S. government has provided little in the way of aid or even words of sympathy.

But Trump was just getting started. A couple house later, he made a big ol' stink about Colin Kaepernick and other protestors in the NFL.

After he referred to players who "disrespect the flag" as "sons of b****es," Trump ignited a fire in the hearts of people on both sides of the issue. His words set the #TakeAKnee movement ablaze. Imagine the feelings and actions Donald could have provoked if he used his platform to urge people to donate to help those in need in Puerto Rico.

Instead, he kept harmfully misinterpreting Kaepernick's peaceful protest against police brutality and racism as disrespect for the nation's flag.

And he kept using his immense power to try to influence owners of NFL teams to fire anyone who exercised their constitutional right to free speech. Let's check in with Puerto Rico, shall we?

Puerto Rico is a U.S. territory. Several million U.S. citizens are living in "apocalyptic" conditions. While Trump is spreading hate and ire based on false pretenses, the governor of Puerto Rico is calling for more resources from the federal government to assist in search-and-rescue efforts on the island. But maybe Trump saw the light and finally addressed the devastating situation in Puerto Rico...

By Saturday afternoon, Trump had (temporarily) moved on from being mad at football players to bullying Arizona Senator John McCain for expressing his opposition to the Graham-Cassidy bill, which, by the way, would absolutely gut the already-broken American health care system. What a use of time!

While Trump was busy screaming wrong opinions about basically every issue facing the American people on Twitter, Puerto Rico was — and is — still dealing with extreme devastation.

There is no timeline for recovery from these storms. Thousands are still in shelters. The storms destroyed about 80 percent of crops in Puerto Rico, threatening their food supply and the livelihoods of farmers. There's a dam in danger of collapsing, which would only cause more extensive damage. At least 10 people are dead as a result of the hurricanes.

That's not enough to get Donald Trump to care, though.

Instead of using his power for good, Trump changed into PJs on Saturday night, and before turning on his Celebrity Apprentice nightlight and heading to bed, he decided to do a wee bit of threatening North Korea. Turns out that maybe wasn't the best move!

Meanwhile, back on the ranch...

Puerto Rico is facing, "No drinking water. No food. No medicine. No dialysis. No insulin. No homes. No fuel for generators. No president." Former Secretary Hillary Clinton, New York Governor Andrew Cuomo, California Senator Kamala Harris, and many other leaders have tweeted their support for Puerto Rico and have urged the president step in.

But Donald Trump is really focused on telling free people in a free country which positions are acceptable to stand in while the national anthem plays.

It's beyond infuriating. Trump's preoccupation with black athletes and "bad ratings" and his total ignorance the situation in Puerto Rico is so obviously based on his own personal racism. Our president doesn't care about Puerto Ricans. Our president doesn't care about the rights and the lives of black citizens. And many are beginning to really take notice...

Our president is going to let people die.

And it will be his fault. In response to a tweet saying that the White House is expected to send aid to Puerto Rico starting in the first or second week of October, Lin-Manuel Miranda, creator of Hamilton, tweeted, "Hey @realDonaldTrump you can't wait that long. There will be a lot of American deaths on your watch if you wait that long." Trump's response?

To get distracted by race cars.

Early on Monday, September 25, Trump had still not tweeted about Puerto Rico, instead praising NASCAR owners for saying they'd fire employees who did not respect the flag. Trump spoke too soon though, as NASCAR then released this statement, in which they officially stand by the "right to peaceably express one's opinions."

Trump's use of Twitter has been criticized before, and it will continue to be criticized.

But the fact that he can't even express sympathy for millions of United States citizens who are currently facing unspeakable hardship is beyond unreasonable. People are dying, Mr. President.