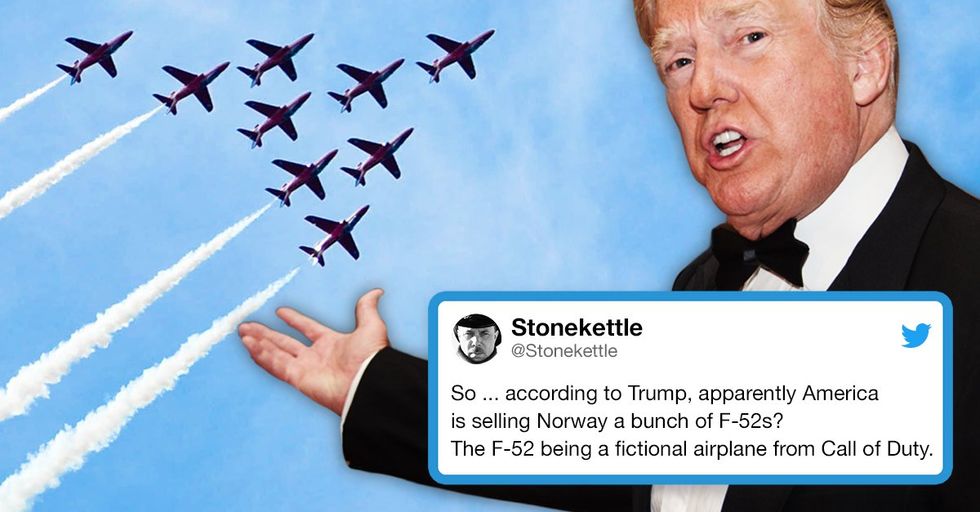 Leave it to the President of the United States to conflate real military assets with ones that are only available in a video game. Of course he did that.

There's no shortage of Trump coverage today thanks to his deeply racist remarks yesterday, and while yes, we should be shouting "DONALD TRUMP IS RACIST!" from the rooftops with regularity, this story also proves that in addition to being racist, he is deeply, deeply dumb.

And he made this idiotic comment in front of a room filled with international reporters. Lovely.

On Wednesday, Trump gave a joint press conference with the Norwegian Prime Minister, Erna Solberg, at the White House.

Reading (-ish) off a piece of paper, Trump said, "In November, we started delivering the first F-52s and F-35 fighter jets. We have a total of 52 and they've delivered a number of them already a little ahead of schedule."
But what Trump meant to say is that Norway purchased 52 F-35 fighter jets, not 52 F-52 and F-35 fighter jets. Because F-52 fighter jets don't exist in real life.
F-52 fighter jets only exist in the video game Call of Duty.  HuffPost dutifully reported on the description of the fictional jet as per the Call of Duty Wiki page: "It is equipped with afterburners for greater speed to outrun aircraft, as well as air brakes, which provide the fighter with additional maneuverability in tight corners or for avoiding enemy fire." Amazing. But not real.

This gorgeous Trump gaffe was too tantalizing for Stephen Colbert not to address on his show:

"That's how good our stealth technology has gotten," Colbert ribbed. "We're making planes even we can't see. Now the president probably just misspoke, or as he calls it: 'spoke.'"
Trump probably wasn't even aware that the F-52 is a thing in Call of Duty. I doubt he plays video games; his hands are probably too small for the controllers. Obviously, Twitter wasn't going to let the president off the hook for his mistake...

Many claimed to have exclusive photographs of the actual F-52:

Funny, Donald Trump's F-52 looks suspiciously like Wonder Woman's invisible plane. And honestly, I'm on board. I need a contraption in which I can hide from the world that will also catapult me off this insane planet.

The F-52 could also just be this giant paper airplane:

Which is actually super impressive. But it doesn't look quite as dangerous as the one from Call of Duty. It's still unclear whether Trump was aware of the video game plane when he misspoke. The Washington Post reported that Sarah Huckabee Sanders wouldn't comment on the issue and did not respond to a question about whether Trump was a fan of Call of Duty.

Look, we are living in the future. A Star Wars-inspired reality might not be far off.

Especially when we consider just how into pushing fictions Donald Trump is. In a bonkers report by Vanity Fair, it was revealed that he's using Fox News as a sort of mouthpiece to spread praise for himself, despite what the facts say. Scary stuff.

Remember when Donald Trump referred to the African nation "Nambia"? Which doesn't exist? Yeah, we do too.

But in all seriousness, there have been too many gaffes to count since Donald Trump stepped into the Oval Office, and every single one of them should appall us.

This may seem minor, but it's just another example of how unfit he is to lead. Sure, he read something wrong, he misspoke, but chances are if he practiced once or like, knew what was going on at all, he wouldn't have made a mistake like this.