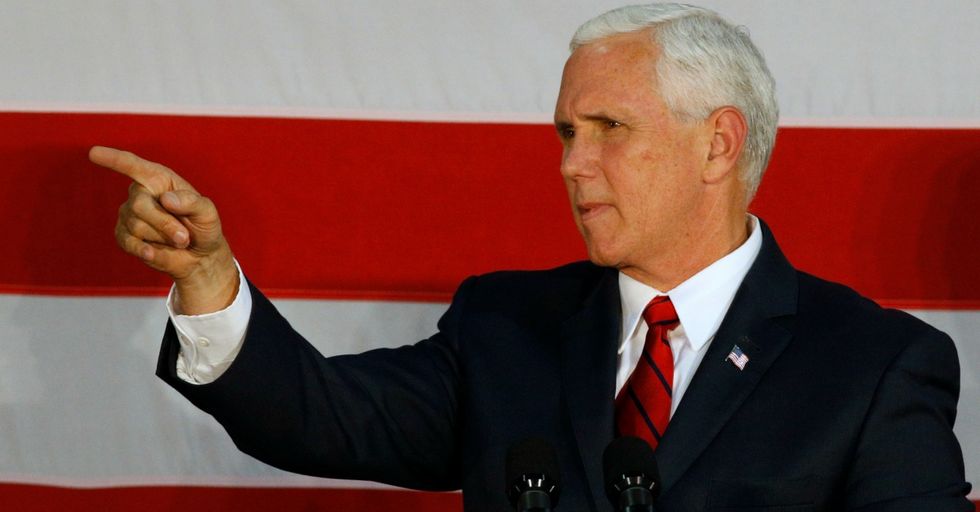 Donald Trump and Mike Pence are an undeniably odd political pairing. One is an impulsive political "outsider," the other, a calculating, very religious "insider" with numerous ties to Conservative big money like the Koch brothers. Despite all this, they have teamed up and seem to present a united political face in the world.

This unity is in large part to Mike Pence's dedication. He famously protested the football protest, and, unlike other officials, such as Secretary of State Rex Tillerson, who reportedly called Trump "a f***ing moron," Pence is "the most publicly deferential to his President of any V.P. I can remember.” This is according to Mark Knoller, a CBS correspondent.

This week, the New Yorker wrote a very detailed expose of Mike Pence entitled "The Danger of President Pence," in which they delve into the Vice President's background and political aspirations.

Among other tidbits of scintillating, well-honed journalistic shade such as the note that "Pence served twelve years in Congress, but never authored a single successful bill," or that he was once described by Democratic Congressman Phil Sharp as "com[ing] across as Midwestern nice, but [was actually] was mean and shallow," Jane Mayer, the expose's author, also divulged an astonishing fact.

Despite all he does to present a united face to the world, Mike Pence is often mocked for his religiosity by Donald Trump.

That's right, Trump gets in his jabs as often as he can. As Mayer states, Trump would often ask Pence's visitors, whether "Mike [made] you pray?" among other, more underhanded comments. But that wasn't the worst of it...

Trump reportedly once made fun of Pence's antagonism towards abortion rights during a meeting with a legal scholar. This was according to two White House sources. But that wasn't the only thing Pence was against, according to Trump.

When they began talking about gay rights, Trump joked, “Don’t ask that guy—he wants to hang them all!" This is in no way funny, especially considering Pence's history with gay rights. As Mayer noted, Pence ran for Congress in Indiana on a rigidly anti-gay platform. It "included a promise to oppose 'any effort to recognize homosexuals as a discrete and insular minority entitled to the protection of anti-discrimination laws.'" He won, which is not entirely reassuring, considering his aggressively conservative views. As Pete Buttigieg, a Democratic and openly gay mayor states, “He just inhabits a different reality. It’s very difficult for him to lay aside the social agenda. He’s a zealot."