Trump Jr. Wants to 'Get Little Kids into the Game' of Using Guns With Gun Silencers | 22 Words 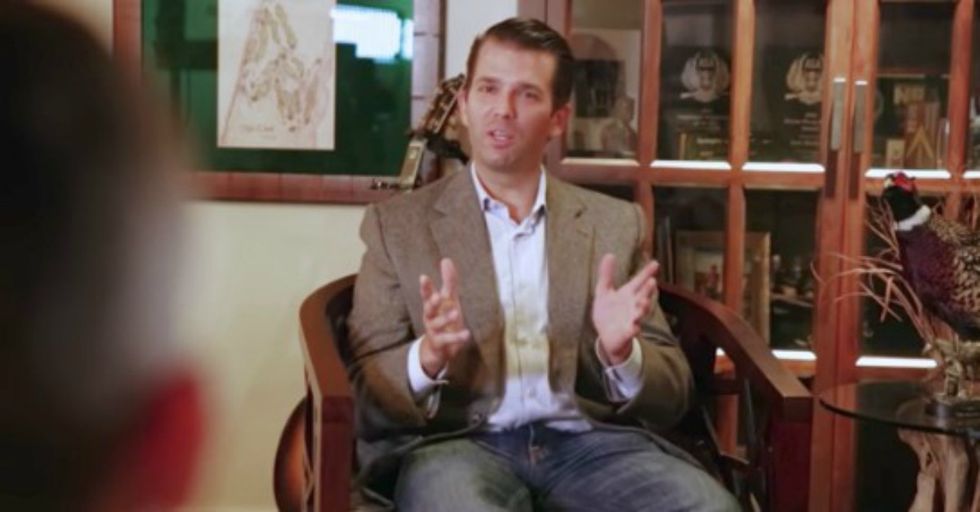 Trump Jr. Wants to 'Get Little Kids into the Game' of Using Guns With Gun Silencers

While sitting in a chair that's way too big for him, he talked about how gun silencers, or suppressors, which dull the sound of gunshots and are currently very restricted in the U.S., are a great way for kids to get into using guns.

The video starts with him firing off a few shots, turning around, and saying, "That thing is awesome," while quiet piano music plays in the background.

And it only gets worse from there.

About half an hour into this 40-minute commercial for SilencerCo, Trump Jr. finally gets around to saying why he's there.

"So, you're here at SilencerCo," asks the interviewer. "Why did you agree to come here?" After saying he loves the product and the fact that it's manufactured in America, he whines about not being able to use their silencer "in the People's Republic of New York." Then, he continues, "I've had the privilege of being able to hunt in Europe, where some of the strictest gun laws in the world exist and guess what. Virtually every hunting gun there is suppressed. They have silencers there. They don’t look at it as this military... whatever, I don’t even know what the left tries to portray this as."

Sure, we can talk about easing restrictions on silencers in the U.S. when the rate of gun deaths in the U.S. and Europe are even close to being equal.

Right now, there is a giant disparity between the rate of gun deaths in the U.S. and the rate of gun deaths in other advanced countries. "Around the world, those countries have substantially lower rates of deaths from gun homicide. In Germany, being murdered with a gun is as uncommon as being killed by a falling object in the United States," according to The New York Times. Until we have gun laws at least as strict as those in Europe, until many fewer people are shot and killed in the U.S. each year, there is no discussion about why silencers are more restricted in the U.S. There just isn't.

But Don Jr. wasn't done yet.

"It’s about safety," he said. "It’s about hearing protection. It’s a health issue, frankly. Getting little kids into the game… it greatly reduces recoil. I mean, it’s just a great instrument. There’s nothing bad about it at all. It makes total sense. That’s where we should be going."

You can watch the whole thing here:

While it's all pretty eye-opening and appalling, Trump Jr.'s comments about silencer restrictions and little kids getting into "the game" begin at around 32:35.

In the wake of the Las Vegas shooting, gun control has again become a national discussion. And the issue of silencers is at the forefront.

The crowd fled at the sound of gunshots. Imagine the deaths if the shooter had a silencer, which the NRA wants to make easier to get.
— Hillary Clinton (@Hillary Clinton)1506953038.0

While many are calling for stricter gun control, some members of Congress are actually fighting to pass a bill that would reduce restrictions on silencers. Even in a world where silencers are helpful for allowing young kids to get started hunting or whatever, even if we live in a time and a place where that is 100 percent acceptable and we don't have to worry about kids accidentally shooting themselves or others (we don't — it happens a lot), making silencers easier to obtain without making other severe changes to restrict gun regulations will only result in even more deadly mass shootings. Even more Americans will lose their lives.