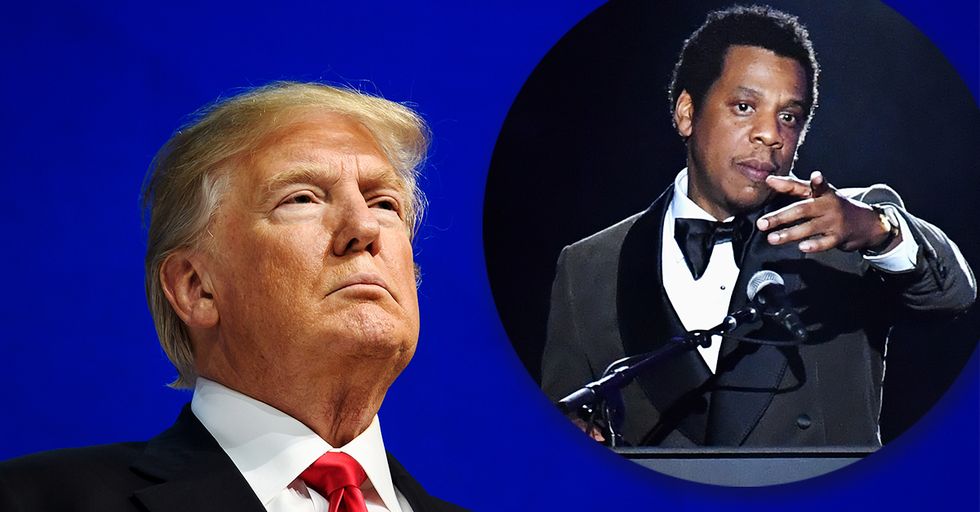 Donald Trump is wildly racist. We all know that. Whether he's blaming "both sides" for violence at a white supremacist rally in Charlottesville, Virginia or calling a black man who dares to peacefully protest the injustices they face a "son of a bitch" or referring to African nations and Haiti as "sh*thole countries," he's demonstrated time and time that he simply doesn't care for or about people of color.

Even though some claim he can't be racist because he has been on television, Donald Trump's racism has been well-documented for decades.

And the sparring match he started with Jay-Z over the weekend is just another instance to throw on the "Donald Trump is a Racist POS" pile." It might seem futile to keep pointing out how our president is a flaming racist, but I have to keep saying it. It's like a mantra at this point. If we keep shouting, "Donald Trump is racist!" from the rooftops of the Internet, maybe more people will finally see how true it is.

Jay-Z was interviewed on CNN by Van Jones on January 27.

"We have a president that comes and says every African country is a 'sh*thole country.' I mean, how does that land with you as a dad?" Jones asked. "It's disappointing, and it's hurtful," Jay-Z began. "It really is hurtful, more so. Everyone feels anger. But after the anger, it's really hurtful because you're looking down on a whole population of people, and you're so misinformed because these places have beautiful people and beautiful everything."
"This is the leader of the free world speaking like this. But on the other side, this has been going on," Jay-Z points out. "This is how people talk. This is how they talk behind closed doors." Donald Trump isn't an anomaly. He is simply a loose-lipped version of what has existed in our country for centuries, the id, if you will, to the ego of the Republican party and to a group of Americans that believes that they, because of the color of their skin, are somehow entitled to happiness and comfort over other Americans who don't look like them.
Jay-Z goes on to discuss how Donald Sterling, the disgraced NBA team owner, was removed from the league after he made racist remarks. He argues that taking Donald Sterling's team away from him didn't help further the conversation about rampant racism in our society; it only served to cover up a blemish and let "all the other closet racists" retreat and hide from public scrutiny. "You haven't fixed anything," Jay-Z said. "What you've done was spray perfume on the trash can."
"What you do, when you do that," Jay-Z continued, "is you know, the bugs come and you spray something and they come and then you create a superbug. You don't take care of the problem. You don't take the trash out. You just keep spraying whatever over it to make it acceptable, and then as those things grow, you create a superbug. And then now we have Donald Trump the superbug." What Jay-Z is saying is that we've treated the symptoms of racism for so long and not the disease, not the root of the problem. And so it's grown and multiplied in an insidious fashion. It's become immune to our old methods of treatment, and it's mutated into something much larger and more destructive than ever before. Donald Trump is the superbug — the current manifestation of this out-of-control problem, and we no longer know how to deal with it, how to kill it.

But the nuance was lost on Donald Trump... obviously.

There are so many things wrong with his response to Jay-Z — even the fact that Trump decided to take on the rapper demonstrates his racism. But let's break this down one issue at a time...

First of all, Donald Trump clearly didn't watch Jay-Z's whole interview with Van Jones because they do address the decline in black unemployment:

Van Jones even went so far as to ask Jay-Z if Donald Trump had a point — black unemployment has in fact gone down while he's been in office. Jay-Z's response? "No. Because it's not about money at the end of the day. Money doesn't equate to happiness. It doesn't. You're missing the whole point. You treat people like human beings." Donald Trump always tries to claim that one little statistic means whole, institutional problems are actually myths. Just because it's cold out doesn't mean global warming doesn't exist, and just because black unemployment is down doesn't mean black people are suddenly treated like they should be in every area of life.

Second of all, black unemployment has been trending downward since 2010.

Black unemployment is at record lows thanks to a massive declining trend started in 2010. Congratulations… https://t.co/C4kueeSsIR
— Joe Scarborough (@Joe Scarborough)1517102894.0

This is just one of several positive trends Donald Trump has taken credit for that we should be thanking Barack Obama for. Just because it's happening while he's in office doesn't mean he implemented the changes that are making it happen. Quite the opposite, actually.

I wonder why Trump has never responded to Eminem’s comments. I mean, I actually know why just like everyone else does.
— deray (@deray)1517152466.0

Meanwhile, Eminem published a 4-and-a-half minute long freestyle rap/rant all about how much he hates Donald Trump and the president said nothing. Nothing. Eminem continues to give interviews where he absolutely slams the Trump, saying a "turd" would have been a better president. But Trump hasn't said a word.

Maybe he would if Eminem ever went on CNN (we know how much the president loves his cable news), but the more likely explanation is that we haven't heard from Trump on Eminem because he's white. And we have heard from him on Jay-Z because he's black.

Donald Trump's disdain for people of color is well-known and well-documented — since he's taken office he has disproportionately attacked black people. There is probably no group he hates more, except for maybe women. And don't even get him started on black women.

But Donald Trump's racism isn't new, and it isn't a shock.

Racism runs in the Trump family — his father was once arrested at a KKK rally. In the '70s, Donald Trump discriminated against black people looking for apartments. In the '80s he vilified the Central Park Five, and when they were proven innocent, Trump wouldn't hear it. During Obama's presidency, he pushed the birther conspiracy. Right before he was elected, he called Mexicans "criminals" and "rapists." We don't need more evidence that Trump is a raging racist. Though he keeps supplying it, we have all that we need. What we must do is find a way to kill the source of the problem. As Jay-Z said, we've allowed this superbug to form. The Trump problem is about more than just Donald Trump. It's about a society that elects and continues to support and enable people who spew these dangerous views and do so without consequence.