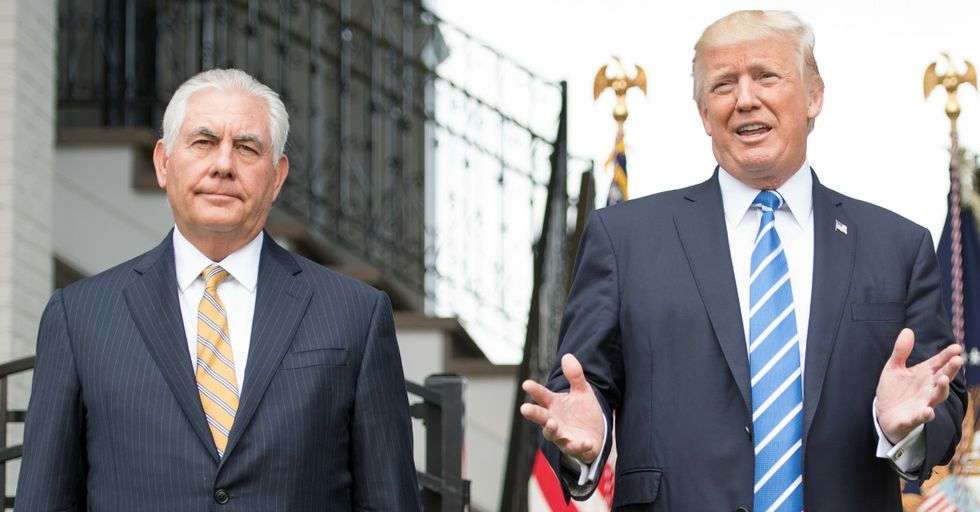 The first rule of proving you're not a moron is to not say, "I'm definitely not a moron. I'll take a test. I'll prove it!"

But that's exactly what Donald Trump, the President of the United States, did.

A report claiming that Secretary of State Rex Tillerson called Trump a "moron" recently went public and made Trump really angry. Tillerson wouldn't deny it, and now Trump is challenging the secretary to a head-to-head IQ battle to prove that he, the President of the United States, is not a moron.

This is the world we live in.

NBC News broke the story that Tillerson called Trump a "moron" after a meeting at the Pentagon on July 20.

Then, in a statement to reporters, Tillerson would not deny that he called the president a "moron." Instead, he just said, "I'm not going to deal with petty stuff like that." In many people's minds, that pretty much confirmed that he did call Trump a moron. Twitter loved it.

But that's not the whole story. It got better:

The expletive just makes it that much more delicious. Reportedly, the president was furious with Tillerson for not denying the comment.

And although it's been several days since this story broke, President Donald Trump doesn't seem to be letting it go.

In a new interview with Forbes, Trump took a swing at Tillerson, saying, "I think it's fake news, but if he did that, I guess we'll have to compare IQ tests. And I can tell you who is going to win."

The President of the United States just challenged the Secretary of State to an IQ test. It's hard to wrap your brain around, so let's take it one more time:

It is on. Mensa has already offered to host the battle. It might also be worth mentioning that IQ tests are "fundamentally flawed" and we shouldn't use them alone to measure intelligence. It might also be worth mentioning that there are real problems in the world. Puerto Rico is facing horrendous consequences of hurricane destruction. The administration is stripping women of their reproductive rights. Yet Donald Trump is busy picking fights with his own cabinet members.

We would expect no less from the guy who tweeted this four years ago:

He's obsessed with proving his own intelligence and bringing others down while he does it. Doesn't seem like a smart move from the president, now does it?