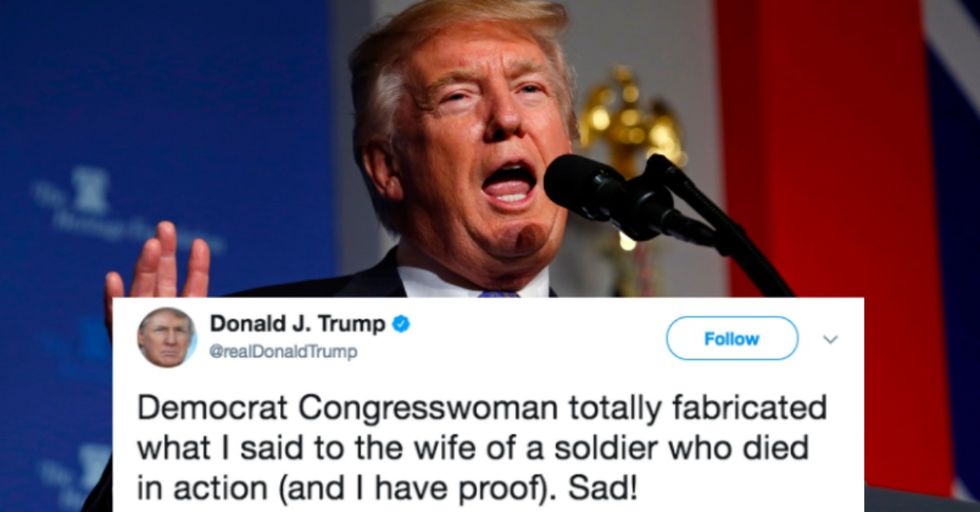 Donald Trump has made a lot of unsubstantiated claims in his lifetime. He has claimed to make countless charitable contributions that have never been confirmed. He's said again and again that he has the best words, even though he most certainly does not. And now, Trump has told the American public that he has definitive proof — that's the word he used: proof — that he did not tell a fallen soldier's widow that "he knew what he signed up for."

Sgt. La David Johnson was an American soldier killed in an October 4 ambush in Niger.

On October 17, Johnson's family, including his pregnant wife, Myeshia, their 2-year-old son, and 6-year-old daughter, arrived at Miami International Airport. It was at the airport while waiting for Johnson's remains that they received a phone call from the president, Donald Trump.

She claims she heard him say repeatedly that "he must've known what he signed up for." "How could you say that to a grieving widow?" Wilson asked, incredulous.

Of course, Donald Trump took to Twitter to claim the congresswoman was lying about the phone call.

And in a significant parenthetical, he claimed to have proof that Wilson totally made up those insensitive comments (which would have to be a completely diabolical, heartless plan on the congresswoman's part). But the "proof" is in. What does Trump have that will prove his innocence in all this?

Nothing. He has nothing, and Sarah Huckabee Sanders admitted it.

According to The Washington Post, when Sanders was asked if the White House had a recording of Trump's call with Myeshia Johnson, Sanders admitted it did not. She did say that there were other top officials on the call, including Chief of Staff John Kelly, but that doesn't constitute proof. There is no proof. Donald Trump lied to you. Again.

Congresswoman Wilson also said that Trump kept referring to Johnson on the phone call as "your guy," seeming to indicate that he didn't even know the fallen soldier's name.

Sanders wouldn't refute that Trump said that, instead stating, "Just because the president says 'your guy' doesn't mean he doesn't know his name." So, there you have it, folks. Trump couldn't produce the proof he swore he had that he didn't say those horrible things to a grieving widow, and his press secretary wouldn't even deny that he repeatedly called the fallen soldier "your guy" on the phone to his distraught wife. That's who's in charge. That's your president.