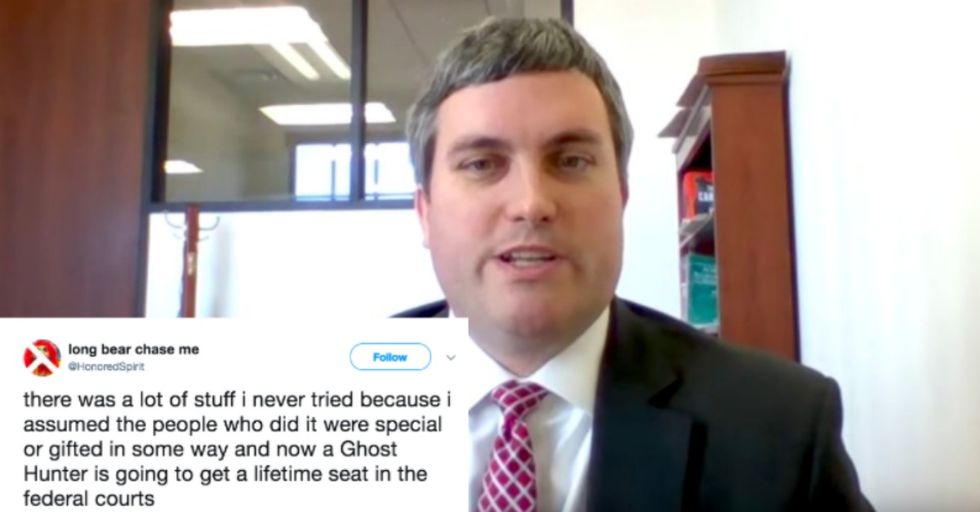 And we thought Betsy DeVos was unqualified!

Growing up, you probably had grand aspirations. You wanted to be an astronaut! Or a famous pop star! Or the President of the United States! And then somewhere down the line, your priorities changed. You realized that it takes a lightning-in-a-bottle combination of talent, luck, and timing to achieve these far-fetched goals.

But we are now living in a time where anyone can do literally anything. And you know what? It's not that great.

Brett J. Talley is the 36-year-old lawyer who has been nominated by the Trump administration to a lifetime position as a federal judge. He has never tried a case. And also he hunts ghosts.

Not that there's anything wrong with being a ghost hunter. Ghosts are cool. We all want to hang with ghosts. But summoning paranormal beings doesn't quite qualify you to be a federal judge for the rest of your life. This is a big decision that Trump and his tiny pointy finger seemed to have made by closing his eyes and flipping to a random page of the phone book.

There are several other problems with Talley nomination as well.

The biggest one is that the American Bar Association has deemed him completely "unqualified" for the position. K cool. There's also the ghost hunting. There's also the tiny tidbit about how he didn't disclose that he was married to a White House lawyer on his Senate questionnaire when he was asked to identify family members and others who could "present potential conflicts of interest." Then there's the ghost hunting. And the fact that he's never tried a case. Also the ghosts. He's also written horror novels and short story collections that have names like The Fiddle Is the Devil's Instrument: and Other Forbidden Knowledge and writes a blog called The Site That Should Not Be (you're telling me — can't even use a colon the correct way).

So there you have it, folks.

The lesson of this story is to never give up on your dreams. Because sometimes, if you follow your dreams, the President of the United States will pluck you away from those dreams and nominate you for a lifetime position as a federal judge and you will probably get confirmed because this country's political party system is so broken.

Let's not worry about it too much, though. We're all going to die so soon, so we'll just turn into ghosts and haunt Brett Talley and Donald Trump until their bad hair flies right off of their respective heads.