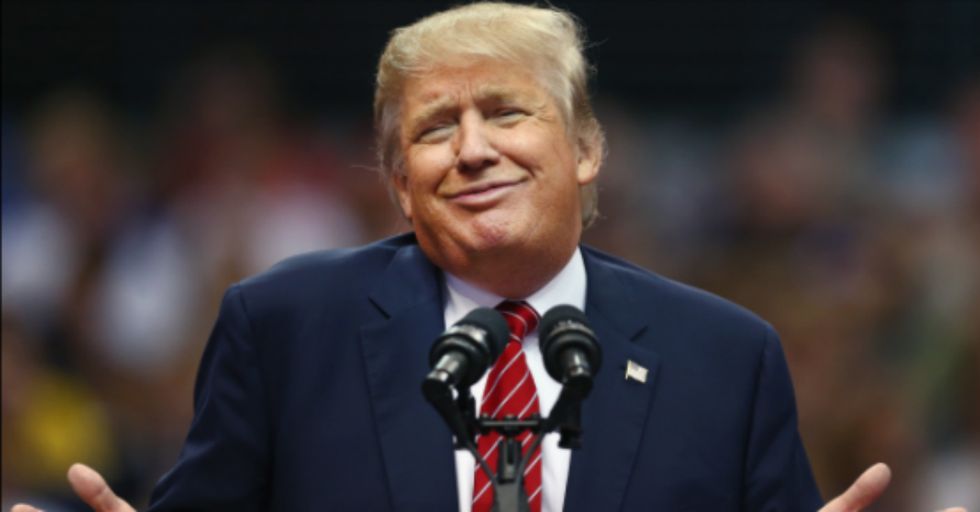 When someone welcomes you to stay with them, the polite thing to do is say "Thank you."

We don't have to tell you this, right?

Well, someone should apparently let the Commander in Chief know. He seems to have missed that particular lesson in manners. On Wednesday, November 29, Trump gave a speech about GOP tax bills when he decided to bring up the people of Asia who had generously hosted him on his recent tour. He didn't have many nice things to say about them, however. At one point, he even appeared to mock them.

Last month, Donald Trump went on a whirlwind tour of several Asian countries. You might be thinking that he had a wonderful time on said tour. After all, he clearly loves saying the word "China."

Wow. Who knew a two-syllable word could be pronounced with such variety? Anyway, despite the man's obvious love for the name of an Asian country, Trump's trip was plagued by several gaffes.

First, there was the fish food incident.

Then there was this complete fumble of a handshake:

Trump is no stranger to the botched handshake, but the ASEAN handshake in the Phillippines proved to be more difficult than basically anything Trump had ever tried before.

Then there was the whole UCLA basketball players thing.

While Trump was in China, he apparently pulled some strings so that some UCLA students who had been caught shoplifting would be released. Then, when he didn't feel as though he'd been thanked enough by said players, he whined about how ungrateful they were being.

When he got back to the States, he had some trouble with a water bottle while talking to the press about the trip:

OK, OK, so this one actually happened on U.S. soil and not in Asia, but it's just too good not to include here. He holds it like a sippy cup! Anyway, On Wednesday, November 29, Trump actually appeared to mock the Asian people who had so graciously hosted him while he was on his trip...

Trump was making a speech to promote GOP tax bills when he — for some reason — decided to talk about the people he met while on his Asian tour. “When I was in Asia, I spoke to a couple of the countries about it and they looked like this," Trump said. Then he pulled this move:

Hunched shoulders, hands together, and nodding with wide eyes. A gesture that seems to imply the "countries" he was talking to didn't understand what he was saying. (Same.) He didn't even to bother to name a specific country. Probably because in his mind, they're all the same, right?

You can see his whole speech (along with the offensive mockery) here:

“You know what this is?" Trump said about his theatrical moment. "Hmm, hmm. That means they know they’re getting away with murder and they got to start helping us out. OK?" No, we don't know how that gesture translates to that meaning. But we don't feel too bad about not understanding it because we're pretty sure Trump doesn't, either.

Because it apparently still needs to be said: This kind of behavior from the President of the United States is wholly unacceptable.

It's disgusting, really. Who put this guy in charge? More importantly, why is he still there?

This guy actually somehow managed to call that Trump would be insensitive toward Asian people well before it even happened:

So far this week, Trump has made racist attacks on immigrants, African Americans, Native Americans and Muslims. I g… https://t.co/v40TgOSoFt
— Facts Do Matter (@Facts Do Matter)1511964594.0

Which leaves us with two questions. First: Is this guy actually a time traveler? Second: If he is, can he please, please bring all of us into the future with him so we can escape the current hellscape we all seem to be trapped in?

Is there no limit to how low this guy will stoop?

Unfortunately, it seems like there is not. To quote our gal Cady Heron, the limit does not exist.