There is one massive takeaway from Trump's "Nambia" mistake. | 22 Words 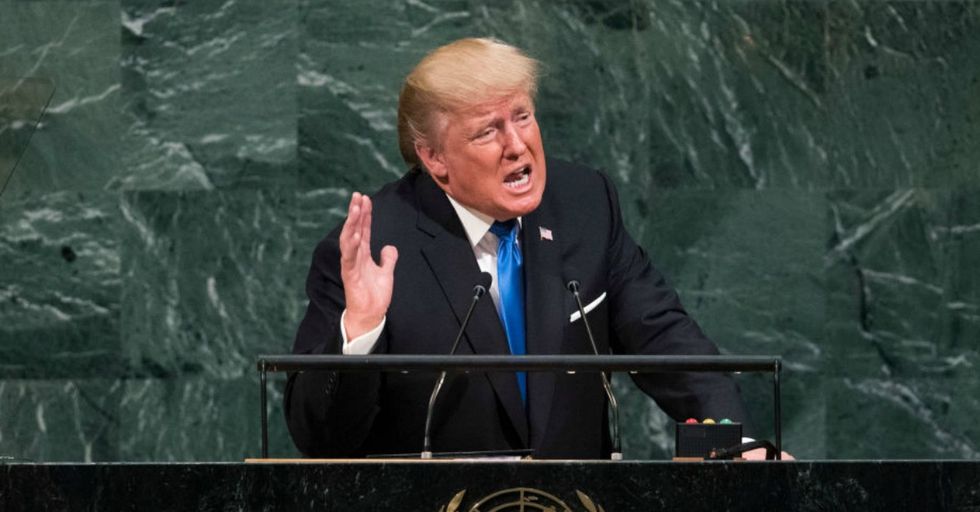 Let's face it: Trump does not have the best words.

Far from it. Things that come out of his mouth are often inappropriate and/or just plain wrong (covfefe, anyone?).

Trump's latest "oopsie" is one one for the many many books that will no doubt be written about this presidency, but it's not surprising. Addressing a room full of leaders of African nations, Donald Trump, referred to an African country that just doesn't exist.

And the entire world simultaneously lowered their faces into their palms.

Before the Africa debacle, Trump appeared before the United Nations on September 19.

During the speech, Trump casually tossed around problematic language. He called Kim Jong Un "Rocket Man," and he referred to North Korea as a "band of criminals."

Trump's words were so cringe-inducing and embarrassing that even the usually stoic former Marine Corps general couldn't maintain his poker face.

In fact, Kelly provided us with a bevy of expressions during that speech that all seemed to ask the grave question, "My God, what have we done?"

At least he gets it, right guys? But if you thought that was the first or the only time John Kelly was all of us during a Trump speech, you're wrong.

Watch the guy lose all faith in humanity as Trump defends his comments about the violence in Charlottesville.

It's unclear what specific abyss Kelly is staring into for this entire video, but we bet it's large and black and all-consuming.

A big reason for that is that he thinks wrong. A lot. But he might not have been thinking at all when he referenced a fake African country in a real speech to real African leaders earlier this week...

"In Guinea and Nigeria, you fought a horrifying Ebola outbreak. Nambia's health system is increasingly self-sufficient," Trump said. Only problem? Nambia's not a real place.

Maybe it was a slip of the tongue, you say. Maybe he misspoke. But nope. He did it twice.

Trump was clearly reading from a piece of paper, but even if there was a typo or something, there's no excuse for repeatedly referencing a non-existent country. It quickly became clear that he had no idea that "Nambia" wasn't a real country.

Namibia is a country, and so is Zambia. But Nambia? Nope-ia.

It seems like we were never going to find out which country's health system is "increasingly self-sufficient." And we'd really like to know. Maybe we'll move there.

Luckily, Mack was on the case.

The official White House transcript of Trump's speech clearly indicated that "Namibia" is actually the country with the great health system. Trump misread, did not realize he'd made a mistake, and then made the same mistake again. Our president, people.

You know Nambia, don't you? It's that African nation that you can only enter through a wardrobe. The guy in charge is a lion, literally, and kids everywhere gorge themselves on Turkish Delight until they get sick. You know, Nambia — oh wait, that's Narnia. Sorry. The jokes kept pouring in...

Both gorgeous, imaginary countries — one invented by Donald Trump in 2017, the other invented by Eddie Murphy for the 1988 movie, Coming to America.

If Nambia is imaginary, it might as well be home to every possible climate.

Tundras, mountains, and rainforests in the same nation sounds like a crazy notion, but when you consider climate change, it suddenly doesn't seem so far-fetched.

There is one massive takeaway from Trump's "Nambia" mistake.

We'd be worried about saying something so insulting about the President of the United States if we thought there was the possibility that he would read that insult. Alas, here we are.