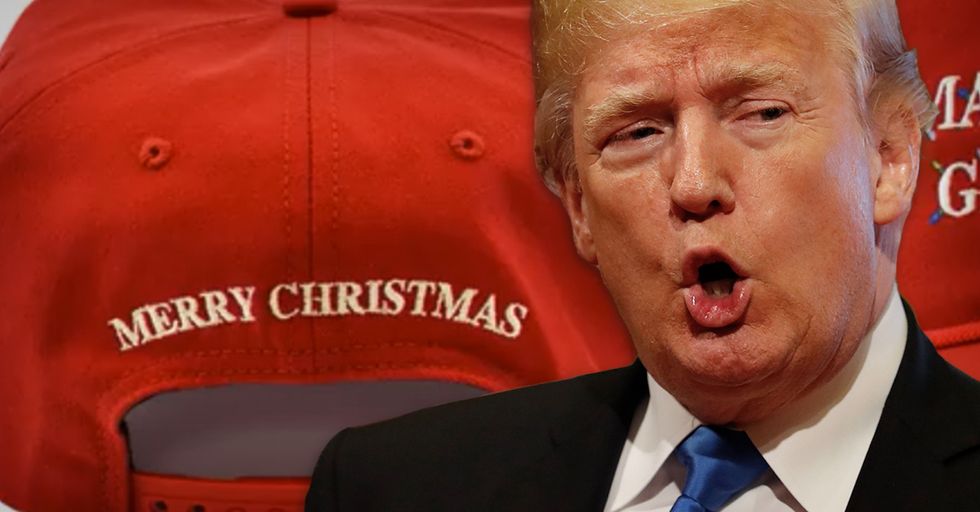 It's beginning to look a lot like Christmas, and this definitely hasn't gone unnoticed by Donald Trump. And what better time to jack up the prices of your merchandise? This week Trump's website (yup, the president has a website that sells Trump-themed merchandise) started selling a brand new Christmas-themed "Make America Great Again" hat, but there's one huge difference: they arbitrarily cost almost 50 percent more than the non-Christmas hats.

The Christmas version of the infamous MAGA hat is similar to the original — a baseball cap with the words “Make America Great Again" printed on the front. Here, though, the words are surrounded by colorful string lights and the back reads “Merry Christmas."

Which is pretty steep for a baseball hat. Those caps better be lined with some cashmere — or at least a really warm fleece.

The caps are also 20 dollars more expensive than the originals.

The regular MAGA hats sold on Trump’s website only cost $25 each. And again, the only difference between the two is the addition of lights and the words “Merry Christmas."

While the words “Merry Christmas" themselves are innocuous enough, the intent behind the item is clear. Trump believes in the “War on Christmas:" the idea that some Americans are trying to erase the holiday by acknowledging that not everybody in this country, one founded on religious freedom, celebrates Christmas. So, as you as may have guessed, there definitely aren’t any “Happy Hanukkah" hats in Trump’s collection.

This isn’t the first time Trump’s sold a holiday hat.

Last month, he released a series of Halloween hats, orange ones with jack-o-lanterns. Which honestly, from the front, are actually kind of cute?

But they had his campaign slogan — “Make America Great Again" — on the back.

They also cost $45 dollars each. Yeah, not as cute.

Are the models OK, though?

We’re slightly concerned for the models on his merchandise page, who look like they’re being held hostage and forced to pose wearing Trump gear. Blink once if you’re safe, models!

The irony of Trump selling a Christmas hat almost a 50 percent increase in price from his regular hats is hard to ignore. While Trump argues that America is trying to "erase Christmas," the true message of of the holiday (you know, charity, inclusiveness, giving — basically all the things the Grinch learns at the end of the "How the Grinch Stole Christmas!" that make his heart grow) seems to be less important to him than making money off Christmas.

People are tweeting about the hats and the insane price jump.

And some users have noticed something else interesting about the hats...

Holding our breath for the $100 MAGA New Year's hat! Happy holidays, everyone!