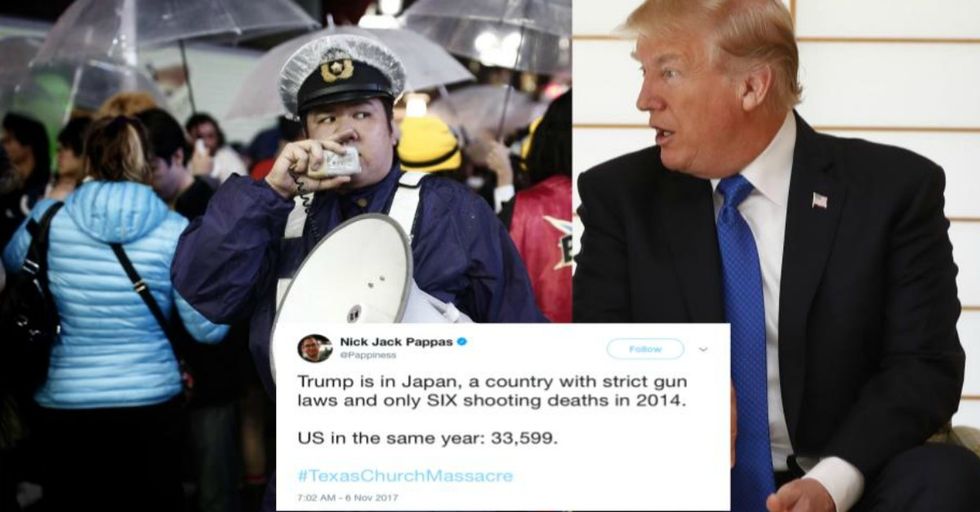 Trump Just Said Something Unbelievably Wrong to the Emperor of Japan

On Sunday, a gunman in black tactical gear massacred 26 and wounded 20 at the First Baptist Church of Sutherland Springs, Texas. It was the second mass shooting in just 35 days that ranked as one of the most lethal in recent history.

President Donald Trump, who has been on the Japan stop of his grand Asia tour this week, took time between sampling the local food and indulging in a minor manufactured scandal over some very expensive fish to comment on the tragedy.

It was "terrible incident," Trump said in conversation with Japanese Emperor Akihito. It could "happen anywhere."

There was only one problem, though. A mass shooting literally can't happen in Japan.

Japan has one of the strictest gun codes in the world. Ever since the passing of the 1958 Firearm and Sword Possession Control Law, which proclaims, “No person shall possess a firearm or firearms or a sword or swords," Japan has kept its guns under strict supervision.

In fact, you have to jump through all sorts of hoops to get a gun.

There's a written test as well as one on the gun range, which you have to pass with 95 percent accuracy. There's interviews with your friends and family to make sure you're not some kind of psycho. The police even interview your neighbors. And you have to repeat this process every three years. Point is, if you're getting a gun, you'd better damn sure be prepared.

Oh, and you definitely can't get pistols or assault rifles either – only shotguns.

Pistols are too small and easily concealable, so they're a no-go. Also, you literally have to count and return every bullet you use before you can get another magazine, so assault rifles are completely out of the question. Japanese police don't even use guns that much. They have to check in their service pistols every day after work. And if just one bullet is missing, the station flies into a panic.

On the subject of the Japanese police, they are trained to de-escalate situations.

They literally must have a black belt in judo or they can't stay in the force. They only use lethal measures when absolutely necessary. In fact, when confronted by drunk or belligerent people, Japanese police have been known to patiently roll them into a donut to keep them from hurting themselves or others. Fast forward to the 2:30 mark above to see the Japanese donut of shame.

The stakes for gun ownership and use in Japan are high.

You can literally be charged for just being in the vicinity of a gun, as one unlucky Yakuza boss found out in 1997 when he was arrested as an accomplice on gun-possession charges. He was sentenced to seven years in prison because one of his subordinates riding in ANOTHER car had a gun. Also, one police officer was charged posthumously for  “non-designated usage" of his firearm after he shot himself to death.

In 2015, there was only one gun-related death in the entire country! As an unnamed Kanto-region police detective explained in the Japan Times, “Of course, guns don’t kill people; people kill people — guns just make it a lot easier to kill a lot of people. That’s why Japan bans them and that’s why my job was catching people with guns and putting them in jail. Usually, long before they could ever put their finger on the trigger."