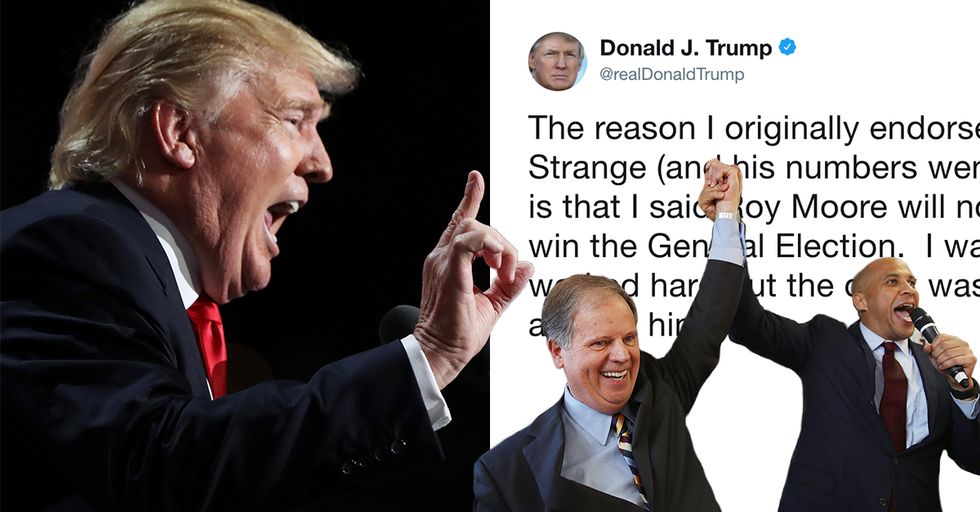 Last night, a historic election took place in Alabama. Doug Jones ran for Alabama's Senate seat against child molester Roy Moore and won, making it the first time a Democrat was elected as Alabama Senator since 1992.

Donald Trump, as he is wont to do, has somehow managed to try and take credit for the whole thing.

Yesterday (before the election results rolled in), Trump was urging the citizens of Alabama to vote for Roy Moore.

Roy Moore, as you'll remember, is a child molester. But that didn't stop Trump from fully endorsing him. After all, having a child molester in Congress is bad (like, really bad), but having a Democrat in Congress (according to Trump), is much worse.
And if being a child molester isn't enough reason not to keep a man out of Congress (and it totally is), consider the fact that in addition to dating and having sex with underage girls, Roy Moore is also anti-Semitic, homophobic, and thinks America was better when slavery was around. AND he rode a horse to the polls which is just plain bizarre.

And we finally, finally breathed the smallest sigh of relief. Maybe our country isn't totally and completely screwed after all. It's still pretty screwed, but not as screwed as it would have been if Moore had been elected. *Shudder*

Once it became clear that Moore had lost the election, Trump offered the following almost congratulatory message to Doug Jones:

Considering the fact that he was likely mid-tantrum while composing this tweet, we're almost impressed. He spelled all the words correctly, refrained from using ALL CAPS, and managed to use only one exclamation mark. PRTTY IMPRSIVE!
But that wasn't Trump's only tweet about the election. (If you thought it was, you clearly haven't been paying attention to how the man tweets.) In his next tweet, he claimed that he knew all along that Roy Moore would lose...

This morning, Trump tweeted that he knew back in September that Moore wouldn't be able to win. That's why he originally endorsed Luther Strange. (Careful readers will remember that after Strange lost to Moore, Trump deleted his tweets supporting him.) Trump was more congratulatory to himself for calling the election than he was to Doug Jones for actually winning it.

We also love Trump's argument that the "deck was stacked against" Roy Moore.

How the deck was stacked against a Republican in a state that has consistently gone red for the past 25 years is completely beyond us. Of course, the guy is a child molester who should never have been running for Congress in the first place. Maybe that's what Trump meant?

There are a lot of reasons that Roy Moore lost last night's election, and none of them have to do with a deck being unfairly stacked against him.

Roy Moore lost the election because he is a pedophile, he is racist, he is homophobic, and he is sexist. And he lost because people of color rocked the vote so hard and showed the world that we won't stand for Roy Moore's brand of awful nonsense.
If anything, Trump's endorsement of Moore could have doomed the candidate. After all, Trump originally endorsed Strange (who lost), then endorsed Roy Moore (who was both a pedophile and, ultimately, a loser). It seems like Trump is not very good at endorsements.
Maybe Trump could start endorsing things we all want to get rid of. Like hurricanes and headphones that get tangled up in your pocket. The Internet didn't take too kindly to Trump's patting himself on the back. There was only one explanation for his ridiculous tweet...

He always has to be right. Even when he's wrong, he can claim that he's actually right. He's like a toddler who loses a game and then screams that his opponent was cheating the whole time.

There's really only one reaction that makes sense here, and comedian Joel Schoenbach captured it perfectly:

There. That just about does it. The fact that Trump felt the need to clarify that he "always knew" Moore would lose is absolutely laughable. Nobody really cares that Trump was wrong. Everyone makes mistakes. People care that he felt it was OK to endorse someone who abused underage girls to run for Senate. That's where you screwed up, Mr. Trump.

We can almost agree with Trump's next tweet, though.

We do need to put up GREAT candidates. Maybe even GREAT Republican candidates! Let's start with candidates who didn't molest children, 'kay?