Trump Lied and Said His State of the Union Ratings Set a Record. They Did Not. | 22 Words 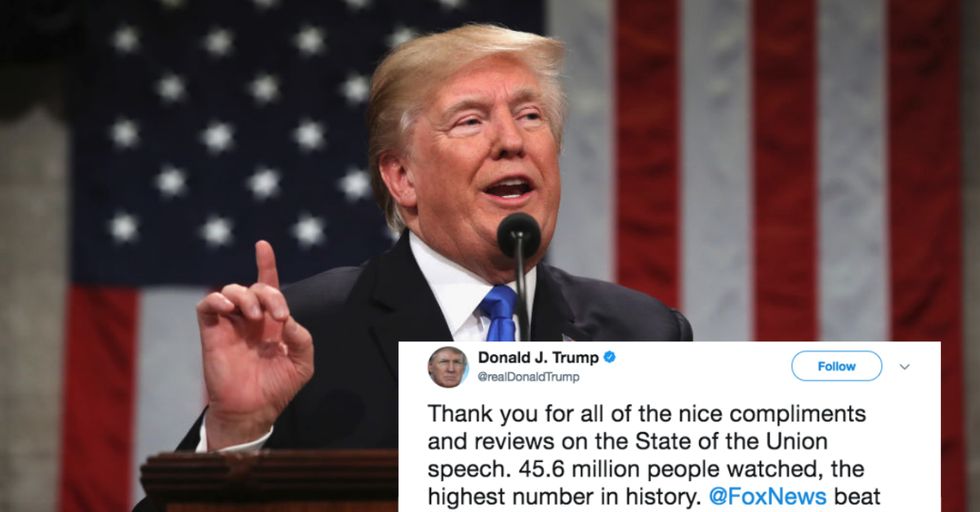 Trump Lied and Said His State of the Union Ratings Set a Record. They Did Not.

Judging by the amount of time Donald Trump spent clapping into the microphone about things he himself had just said, it's pretty clear that he was over-the-moon about his own performance at the State of the Union address earlier this week.

In general, he's one of the most self-congratulatory people in existence. His ability to fabricate praise for himself out of thin air is bar none.

Donald Trump thought he did a pretty incredible job at the State of the Union address.

Trump woke up early this morning, pulled himself out from under his race car sheets, and tweeted this:

According to Nielsen, the real TV ratings experts, in 1993 Bill Clinton drew in 66.9 million viewers for his State of the Union address. I don't know if you know this, but 66.9 million is a much bigger number than 45.6 million. In 1998, 53 million tuned in to Clinton's speech. That's also more than 45.6 million.

Even George W. Bush, the other worst president in history, beat out Donald Trump's SOTU ratings on more than one occasion. In 2002, 51.7 million watched and in 2003, 62 million tuned in.

Oh yes, here's the kicker. Sworn enemy of Donald Trump, the guy whose presidency Trump is hell-bent on undoing, also beat Trump in his first SOTU in 2009 (52.4 million watched). The next year, in 2010, that number dropped to 48 million. However, 48 million is still more than 45.6 million. Hmm. I wonder how the Internet reacted to this news...

Obviously, they caught Trump in the lie pretty immediately.

It's not like it's a new thing for Donald Trump to tell untruths. Literally the day after his inauguration, he was boasting about how it was the largest crowd in history. Photographs of the event proved otherwise.

Then he claimed that his approval rating for his first year in office was the same as Barack Obama's. It most certainly was not.

In a world where facts no longer matter and someone (*ahem* the president) just can yell, "Fake news!" and people believe him, we have to remain vigilant and broadcast facts as far and wide as we can.

Donald Trump's lie about his State of the Union ratings, while minor compared to the lies he's told and the things he's done, is still extremely harmful.

We're living in a dystopian novel. Donald Trump is the villain. We are all Katniss Everdeen and facts are our weapons. Dramatic? No. This is the end of the world, people.