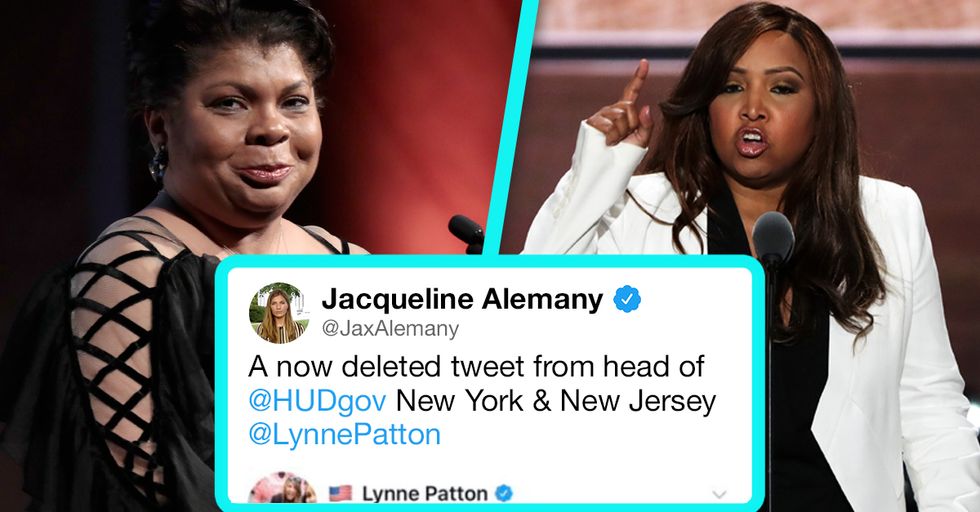 A White House employee fat-shamed a reporter. That's where we are in 2018.

That's the kind of infantile and insulting behavior Donald Trump has facilitated with his administration, and it's got to stop.

On January 21, Porter Anderson tweeted out this quote from April D. Ryan's appearance on CNN.

She spoke about how as a White House correspondent, she's received death threats due to the hostile environment Donald Trump has created for journalists and news organizations.

Lynne Patton, a key official at the Department of Housing and Urban Development and fervent Trump supporter, wasn't having any of Ryan's shtuff.

Is she bragging about getting more death threats than a journalist? What exactly is going on here? Maybe attack the people who send you death threats rather than the journalist who is experiencing them much like you have. What a bizarre line of thinking.

Not one to go down without confronting a bully, April D. Ryan snapped back.

It's truly, truly so difficult to understand why Patton would start a fight with a fellow woman who is being threatened with death by crazy Internet trolls (probably).

And yet, here she is, escalating a pointless feud.

Not only does April D. Ryan not work for a bankrupt outlet, she's also a respected White House correspondent! What the actual heck.
Ryan couldn't not respond to Patton — it seemed like this Twitter feud wasn't going to end without a big bang. And oh boy, was there a bang...

As a reminder, Patton is a federal employee. A Trump official.

And she's firing off childish mean tweets full of GIFs and emojis to a journalist. What is this world coming to?

Because April D. Ryan is a professional journalist, she called out Patton for her lack of fact-checking...

She also tossed in a sassy comment because Patton let all respect and dignity fly out the window when she threw the first punch.
April D. Ryan wasn't going down without a fight, and it was pretty delicious since Patton kept saying more and more idiotic things.

But then, she took it too far. Patton tweeted out this picture of April D. Ryan and called her "Miss Piggy." YEAH. She deleted it, but it was too late.

A Trump administration official fat-shaming a journalist is the most Trumpy thing to happen in 2018.

Shortly after she deleted the offending tweet, Patton issued an apology:

Ryan, ever the spitfire, didn't quite directly accept Patton's apology, but she did accept an apology from Patton's boss at HUD, Ben Carson. So yeah. Two women, a Trump official and a journalist, fought over who me more mad about receiving death threats. 2018 is going great everyone.