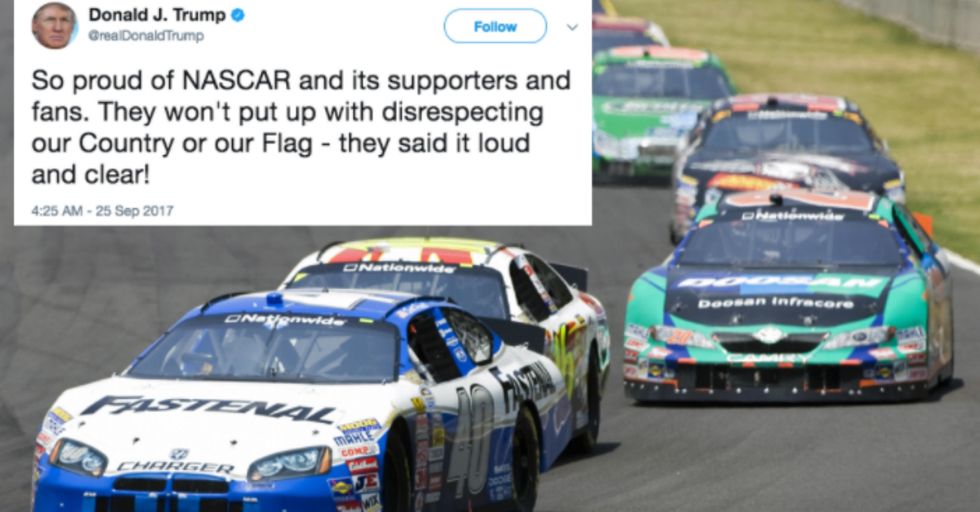 On the heels of a dramatic weekend during which Donald Trump bashed athletes for not wanting to visit the White House and for peacefully protesting systemic racism and injustices committed against black people, Trump took to Twitter on the morning of Monday, September 25 to regale us with his thoughts about NASCAR.

It didn't quite go as planned, however, and like many of Trump's tweets, this one didn't age well.

Donald Trump made a big stink about Colin Kaepernick's totally peaceful protest of choice – to kneel during the national anthem when it's played before NFL games.

In response, several NASCAR owners, including Richard Petty, the ridiculous human being pictured above, "said they would fire employees who protest the national anthem." Funny thing is the NFL protest is not, has never been, and will never be a protest against the national anthem or against the flag or against Trump. Kaepernick started his quiet protest before Trump was president as a response to the repeated police brutality faced by people of color in this country. The statement by NASCAR owners was enough for our president though.

He tweeted this in praise of NASCAR owners who said they wouldn't tolerate those who "disrespect the flag."

He let this one rip at 7:25 a.m. EST. Less than half an hour later, he was regretting sending this out. Or he would have regretted it...if the guy had the capacity to regret anything.

This quote from John F. Kennedy explicitly expresses Earnhardt Jr.'s support of peaceful protest. It even goes so far as to say that those who don't allow for peaceful demonstration will be the cause of "violent revolution." Powerful words.

Not long after, the NASCAR organization itself released this statement, clearly backing peaceful protestors.

One of the rights that we take pride in, that we celebrate when we sing the national anthem, is the right to free speech and to peaceful protest. Trump hasn't walked back his original tweet, but it's clear that he's landing on the wrong side of history here.