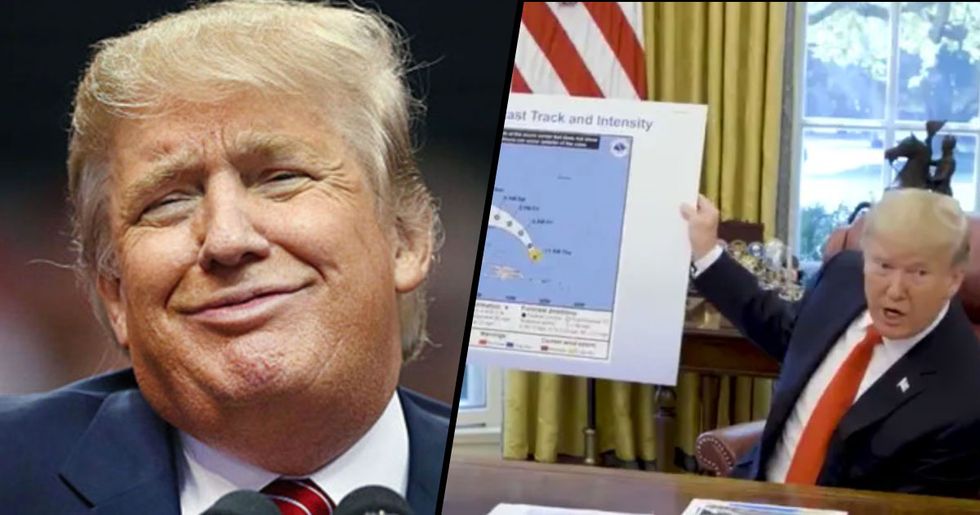 With one of the most powerful and deadly hurricanes on record threatening our country, it would be nice to have a President who takes the matter seriously, wouldn't it?

However, our president is Donald Trump, and he seemingly can't take anything seriously... Even if he tries.

On Sunday, President Trump stated in one of his infamous tweets that Alabama was among the several states predicted to be affected by Hurricane Dorian's rampage across the country. Except... It isn't.

And, rather than admitting to his mistake, Trump went on to display a hurricane map that had been obviously altered to falsely show the storm passing over Alabama. Yes, while our country waits for a battering from perhaps the most dangerous storm of all time, our President is out there making fake maps.

Keep reading to see the ridiculous edit, which has left people all over the world in complete disbelief.

Hurricane Dorian has become one of the world's most formidable storms.

Dorian initially developed from a tropical wave in the Central Atlantic on August twenty-fourth last week. Since then, however, it has grown into an extremely powerful tropical cyclone and has caused widespread flooding and destruction to the Bahamas.

The storm was initially labelled as a Category 5 hurricane.

And a Category 5 hurricane is the deadliest of them all. Category 5 is the highest classification on the Saffir-Simpson Hurricane Wind Scale, and only storms of wind gusts of at least 156 mph can be classed in this category.

Though it was downgraded to a Category 3 storm...

It has still left a devastating trail of mass destruction across the Bahamas.

The hurricane made its initial landfall on September 1st...

And, upon doing so, it viciously battered the Abaco Islands and Grand Bahama. There have been miles upon miles of destruction, with roofs torn off, scattered debris, overturned cars, shipping containers and boats, and alarmingly high water levels, resulting in dangerous flooding.

And the death toll is only expected to rise.

The death toll in the Bahamas currently stands at 20, but as searchers comb the landscape in the upcoming days, the full extent of the damage will be revealed.

Dorian is now en route to our East Coast.

The eye is projected to remain just off the coast of the eastern US, moving past South Carolina later on today. It has been estimated that up to 1.5 million people could be ordered to evacuate the U.S Coastline within the next couple of days.

The storm is currently parked in the Atlantic Ocean about 100 miles south of Charleston, South Carolina. Roughly 206,295 customers are without power in Georgia and South Carolina as of 7:30 a.m today, and mild flooding has been reported.

Terrifying footage has been emerging from the area.

And the National Hurricane Center (NHC) said that the Category 3 strength hurricane could maintain intensity for several days before weakening through the weekend.

The hurricane is expected to move north...

And the main areas predicted to be affected by the storm are Florida, South Carolina, North Carolina, and Georgia.

In true Trump fashion, our President decided to pipe up and state that Alabama is at risk of being affected by the storm, too.

But is Alabama actually at risk?

According to the National Hurricane Center, and pretty much every qualified meteorologist ever to exist, Alabama will not experience any effects from the storm. As you can see in the diagram above, Alabama is not in, or anywhere near, the storm's path.

It looks like our President has a bit of revision to do.

Because he evidently has no idea where Alabama is on the map.

People were quick to put right the President's error.

Even the National Weather Service office in Birmingham got involved to set the record straight, and took the unusual step of tweeting that “Alabama will NOT see any impacts from #Dorian."

But, Donald being Donald...

The President refused to admit that he was wrong, and instead sent out a passive-aggressive tweet aimed at ABC's "lightweight" reporter, all while standing firmly with his claims.

And then there was the map.

Oh, didn't I mention? Our President actually produced a map of Hurricane Dorian's path that had been altered to confirm his claims about Alabama being affected.

The map has been obviously altered.

On Wednesday, Trump displayed the map, which appears to have been crudely edited with some form of Sharpie pen.

Can't quite see it?

Take a closer look. They could have at least used a white marker to make it look authentic...

@wxdam Can this please, please be the reason he gets impeached? Falsifying a weather report with a sharpie would be… https://t.co/8mv8couhBd
— Big Timby (@Big Timby)1567635214.0

And some pointed out how this could be the perfect, and hilarious, excuse for his impeachment.

Because he may have broken the law.

It is a violation of federal law to falsify a National Weather Service forecast and pass it off as official, as Pre… https://t.co/8TOZWeEZm4
— Dennis Mersereau (@Dennis Mersereau)1567620087.0

Under federal law, it is illegal to pass off a doctored National Weather Service forecast as official, weather journalist Dennis Mersereau pointed out. “Whoever knowingly issues or publishes any counterfeit weather forecast or warning of weather conditions falsely representing such forecast or warning to have been issued or published by the Weather Bureau, United States Signal Service, or other branches of the Government service, shall be fined under this title or imprisoned not more than ninety days, or both," the law states.

As for Trump's response to the whole thing?

He denied any wrong-doing, of course. A White House reporter asked him about the map, saying “it looked like someone took a Sharpie....," the Washington Post reported. “I don’t know. I don’t know," Trump reportedly replied, and he repeated the false claim that Alabama was in the storm’s path. You stay classy, Mr. President. Up for more (hilarious) Trump content? Keep scrolling!