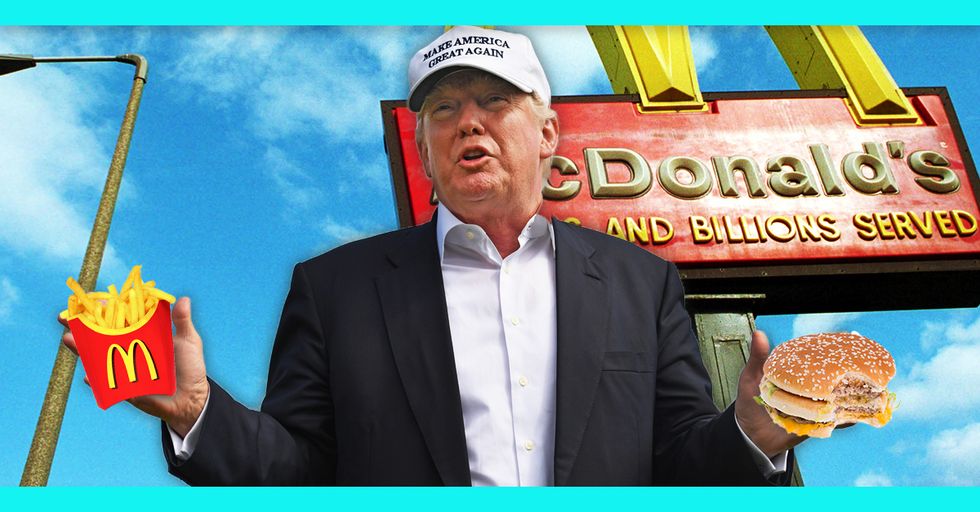 Trump Reportedly Eats McDonald's Because He's Afraid of Being Poisoned

There's a little book coming out tomorrow (the release date was pushed up because of how much buzz it's generating) called Fire and Fury: Inside the Trump White House. It's written by journalist Michael Wolff, and it's supposedly a bombshell tell-all exposé of all the nonsense that's gone on behind the curtains since Trump took office, which is somehow even crazier than the all the nonsense that's happened right in front of the curtains.

Now, there is some question as to how reliable Wolff's account will be — several details from the book that have been released so far seem almost too good to be true.

But one revelation from Fire and Fury that we pretty much believe word-for-word is the reason that Trump eats McDonald's all the time (aside from the fact that he likes the way those little hamburgers make his hands look extra big).

As we know, although Donald Trump is the big, tough President of the United States, he has his... quirks.

He's reportedly quite the germophobe, and he's so picky and prone to "meltdowns" that his staff has to take extreme measures to make sure he remains calm and happy, like the toddler he is.

And let's not forget, he's probably the only adult man in the history of the world who drinks water the way he does.

It's not normal, people. He's now used both of his hands to drink water twice on television. Needless to say, the guy is full of strange behaviors and habits.

Among those is his penchant for fast food, specifically McDonald's.

Donald Trump has boasted about being one of the richest men in the country. He could easily hire a personal chef to cook him nutritious, wholesome meals according to his (probably very childlike) tastes on a regular basis, and yet, he chooses McDonald's, home of some of the most unhealthy food on the planet. Why?

Well, according to Michael Wolff in Fire and Fury, it's because Donald Trump is worried about being poisoned.

That's right, folks. One of the details of Wolff's book that has been exposed is that Donald Trump trusts McDonald's food more than anything else because he is afraid that someone will try to poison him. This is not a joke. This is real life. Being poisoned is apparently a "longtime fear" of Trump's, and "one reason why he liked to eat at McDonald's — nobody knew he was coming and the food was safely premade."

Well, we have some news for the president...

So, Trump eats at McDonalds because he has a paralyzing "fear of being poisoned"..... Congratulations mr President,… https://t.co/QoEEcoLIBa
— Nik Carter (@Nik Carter)1515092942.0

McDonald's is poison. Joke's on him — he's been poisoning himself for years with that crap! While he was busy going around stuffing Big Macs down his gullet for fear of someone lacing a steak with cyanide, he has actually been the one doing the poisoning all along. Man, this is like an Agatha Christie novel. Of course, this isn't the only wildly misguided thing Donald Trump has done...

Remember when he looked straight into the sun during the eclipse?

Yeah, that happened. The guy doesn't have a great track record when it comes to logic...or tact...or being an adult.
Going back to the poisoning thing for a moment... Don't you think that if you are so incredibly paranoid that you think someone would try to poison your food, you might be doing something wrong? Not treating people properly? Inciting violent anger from your behavior is more of a reflection on you than on anyone else.

But soon, Donald Trump won't have to worry about being poisoned anymore, since we'll all be blown to smithereens in World War III, which he has so kindly taken steps to start for us.

Maybe this was Trump's plan all along. Maybe he really hates McDonald's and only became president so he could start a nuclear war and wipe out humanity and never have to worry about someone poisoning him again because he and everyone else would be dead. Man, that would be the saddest episode of The Twilight Zone.

While we enter World War III, Donald Trump might want to reconsider his fast-food joint of choice. KFC has just the sort of hubris Trump himself showed, especially when they recreated his tweet fast-food style:

This would be funny if it wasn't so incredibly frightening. But even if Trump switched to KFC, that's enough fast food to do damage to anyone, no matter how much poison they're trying to avoid.
Sidenote: Can you picture Trump eating a salad? Because we're trying really hard, and we cannot. The ridiculous reason behind Donald Trump's penchant for McDonald's is, we're sure, not going to be the craziest revelation from Michael Wolff's book. But it's a juicy one, much like a McDonald's hamburger.