And then there were the ballerinas. | 22 Words 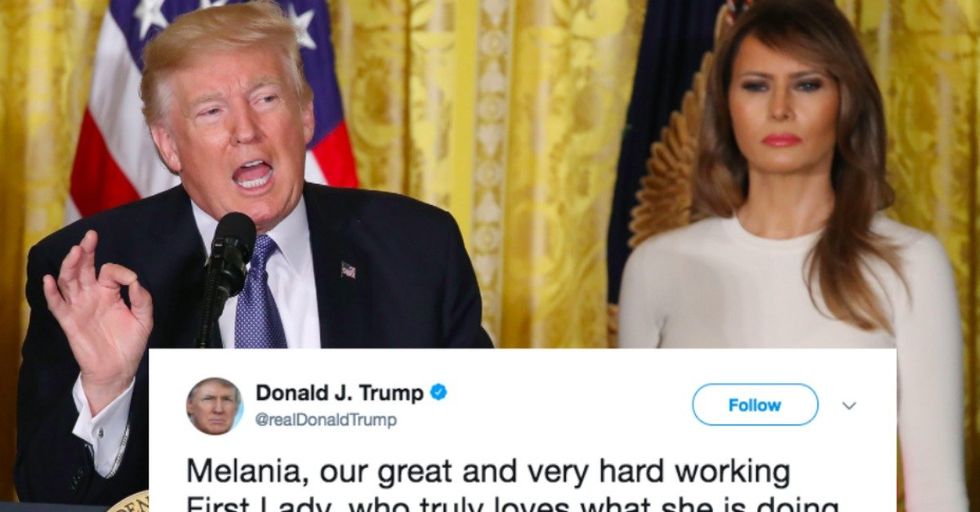 Imagine for a second that President Barack Obama felt compelled to tweet that Michelle really truly does like being the First Lady even though several sources have said that she never wanted the job and despite the fact that she constantly looks like she's trying to squint herself away from her own reality. It would be a media circus! A front-page story for weeks!

But because it's 2017 and Donald Trump is the president, his tweet claiming Melania actually really loves her job is merely Tuesday's "funny haha."

In case you missed it, there's been some speculation this week as to whether or not Melania Trump is content with her role as the First Lady.

Vanity Fair published an article claiming that inside sources have said that she "didn't want this come hell or high water," and honestly, we can't blame her. But of course, Melania vehemently denied these claims through her spokeswoman, who said that Melania is "honored by her role."

Because he just can't keep his mouth shut about anything, Donald himself decided to chime in with a bizarre tweet:

According to him, Melania "truly loves what she is doing." He also couldn't resist making this about him, adding that she always thought he would win the election and "Country is doing great!" Wow.

Well, the Internet — obviously — immediately responded with a handful of well-documented moments that pretty definitively show that Melania isn't quite as thrilled with her life as her husband purports.

Her face says it all. And Melania! Hun! We do not blame you one bit. My goodness, if you were to come out and say, "I am miserable. Someone come save me," there would be hundreds of thousands of people at the White House door with chicken soup and an empty suitcase for you to pack your most precious eating diamonds so we could whisk you away.

Let's not forget what happened yesterday either. Melania's White House Christmas decorations/the manifestation of the gothic horror that is her life were revealed.

And boy, did they reveal a lot. This year's White House Christmas decor seems to say, "Help! I'm trapped in a cold marble trap of my own making, and it's getting darker and colder by the second."

And then there were the ballerinas.

It's all too much. Melania stands stoically contemplating the freedom of the dancers before her. The fluidity of their movements is envy-worthy, for she is stuck, motionless in a quickly frosting-over hellscape. But the depth of Melania's unhappiness is an ever-deepening well, and we've just teetered over the edge and fallen in...

Some of you may think, "These photos are just flukes. She can't possibly look that unhappy all the time." To you, we present the rest of this article.

Those ballerinas could dance until their feet fall off and Melania would not crack a smile. But this wasn't the first incident where she showed her true feelings.

Have you ever seen a smile fall so fast? We have, once, when a small child accidentally tipped his brand new ice cream cone and all the vanilla and sprinkles splattered all over the sidewalk.

Then there was the time where she swiped away the hand of her husband.

The GIFs say it all, people. Honestly, Melania, we're here for you babe. Just be honest with us.

Usually, when one claps their hands together, it is for a joyous or congratulatory occasion.

What could Melania be clapping for here? "Yay. The end of the world is nigh." That's our only guess.

We'd ask Melania to blink once to let us know she's OK, but we think she's too busy trying to blink away her job. It's got to be so hard to be the First Lady to the worst president in the history of the United States. We sympathize.