Trump Says 'America First,' and Then Gives 70 Visas to Foreigners to Work at His Mar-A-Lago Resort | 22 Words 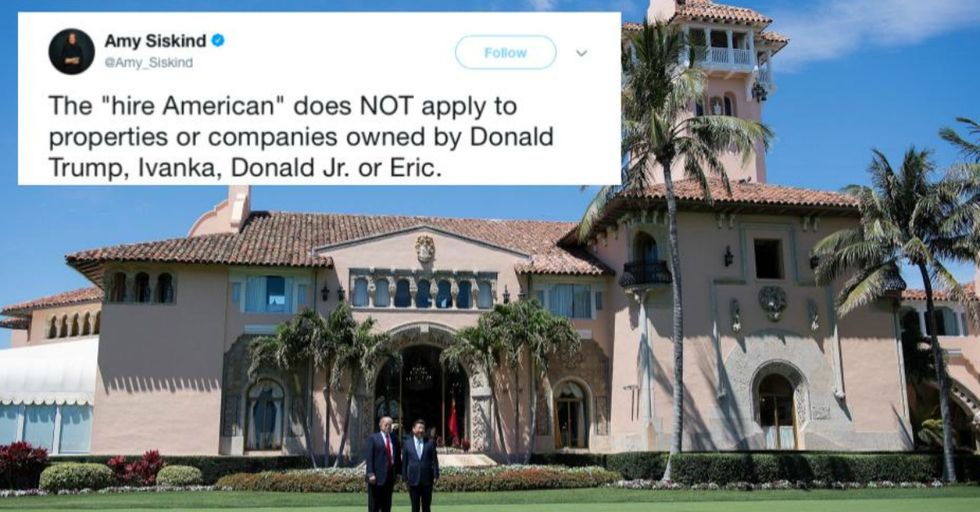 Trump Says 'America First,' and Then Gives 70 Visas to Foreigners to Work at His Mar-A-Lago Resort

Oh, that wacky Donald Trump. He has consistently insisted "America First!" and railed against the liberal elites that have taken American jobs and sent them overseas. He even signed an executive order called "Buy American and Hire American," which he claims will help American workers by making it more difficult to import employees via the H-1B visa program.

"Right now, H-1B visas are awarded in a totally random lottery, and that's wrong," Trump said. "Instead, they should be given to the most-skilled and highest-paid applicants, and they should never, ever be used to replace Americans,"

Trump is really, very, super America First... except when he's not.

The Palm Beach Post reports that Trump has garnered 70 visas for his Mar-a-Lago Club for the 2017-18 tourist season. This is up nine percent from last year when he had only 64. Wait a second.

The report explains that these new hires will largely be cooks, cleaners, and servers.

Trump could have hired locals, but “It’s very, very hard to get people," Trump said during a 2016 presidential debate against Marco Rubio. “Other hotels do the exact same thing," he added.

But the thing is, a large force of American workers in Palm Beach County WANT the jobs.

And in fact, employers are required to put out job placement ads before they hire abroad.

According to the Huffington Post,  however, "Mar-a-Lago chose to place two hard-to-find classified ads in tiny type with no phone number or email information... Workers could apply only by fax or mail." That sounds... convenient.

Mar-a-Lago definitely, certainly made the effort to hire American workers.

It's just that no one could find that very tiny ad. Now the hotel will just have to make do with cheaper foreign workers who will only be paid $10.33 to $13.34 per hour. It's a massive sacrifice, but the Trump family is used to sacrifice. After all, Ivanka Trump's clothing line is exclusively manufactured abroad. America first!