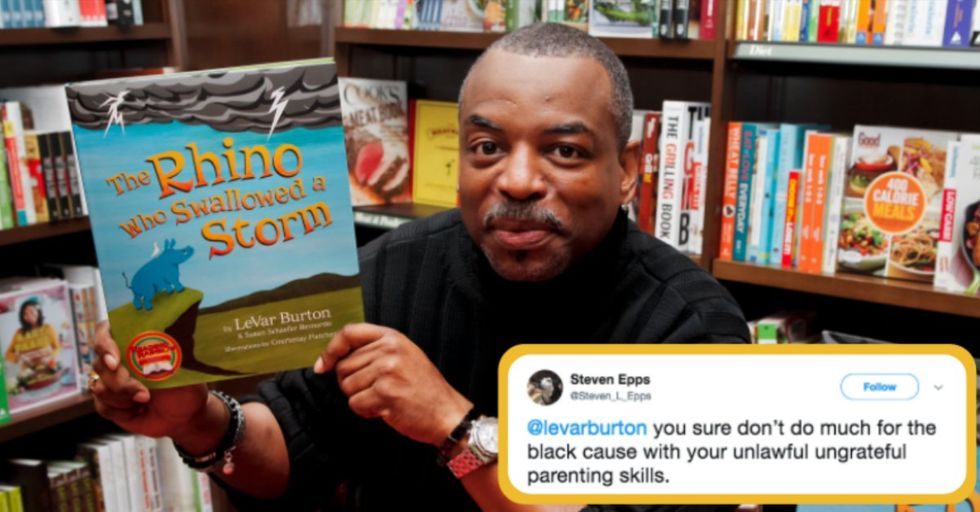 If you scroll through LeVar Burton's Twitter mentions over the last few days, you might notice something a little shocking. The beloved TV host has been bombarded with several hate-filled tweets from people who seem to really hate him. What's really weird about this is that LeVar Burton hasn't done anything shocking or scandalous.

So why all the hate?

As it turns out, it's a case of mistaken identity...and poor reading skills.

You may recognize him as the host from the PBS show Reading Rainbow, in which he taught children about the magic of books. Or maybe you recognize him as Geordi La Forge from Star Trek:TNG, another franchise that has delighted millions of people. Basically, everyone loves this guy.

But recently, Burton has been getting some really mean tweets sent to him.

@levarburton You're a has been actor with a thief for a son and Trump is the president of the United States. Get the picture?
— markconte (@markconte)1511276396.0

For some reason, Trump supporter on Twitter are sending vitriolic messages to one of America's favorite TV hosts. They seem very angry about something. But what?

Apparently, it's because they think LeVar Burton is this guy:

His name is LaVar Ball, and he's currently embroiled in a feud with Donald Trump. Earlier this month, Ball's son, who plays basketball at UCLA, was caught shoplifting in China along with two of his teammates. Donald Trump pulled some strings to get them released from China and has since been tweeting up a storm over how ungrateful they've been. LeVar Burton, on the other hand, had absolutely nothing to do with it. You know. Because he's a completely different person?

But that hasn't kept Trump supporters from sending him hate tweets. He's been very good-natured about the whole ordeal:

One of many sleights I am having to endure these days. Thanks! @Lavarbigballer... #bydhttmwfi https://t.co/uYkoDOV6yZ
— LeVar Burton (@LeVar Burton)1511280368.0

(As though we expected anything less from LeVar Burton.) Poor LeVar. He deserves better than this.

When someone tried to point out that there were some issues with the "washed-up" actor tweet, another Twitter user doubled down in defense of the insult.

"Washed-up actor"? No. "Son caught stealing"? Nope. "Trump still president"? OK, we'll give you that one. (For now.) The hate tweets didn't stop there...

This Twitter user thinks Burton is a bad parent:

But as far as we know, Michaela and Eian (Burton's two children), haven't been involved in any scandals, so we think he's probably doing just fine.

First of all, it's LeVar with an "e." Second of all...no, actually, it would take too long to correct everything else wrong with this tweet.

In case you're still confused, here's a helpful list of everyone who is not LeVar Burton:

Also, your friend Steve didn't invent the iPhone. LaVar is not LeVar! Figure it out, people!

It's one of life's greatest ironies that people are insulting the host of Reading Rainbow as a result of their own lack of reading comprehension.

Luckily for them, Reading Rainbow is back after a very successful Kickstarter campaign. They should probably settle in and watch every episode ever. Then they'll never want to insult LeVar Burton again.

He's a hero and a scholar and he's done nothing wrong. But you don't have to take our word for it.