Trump Takes 'Executive Time' to Watch TV and Tweet Every Day, Because of Course He Does | 22 Words 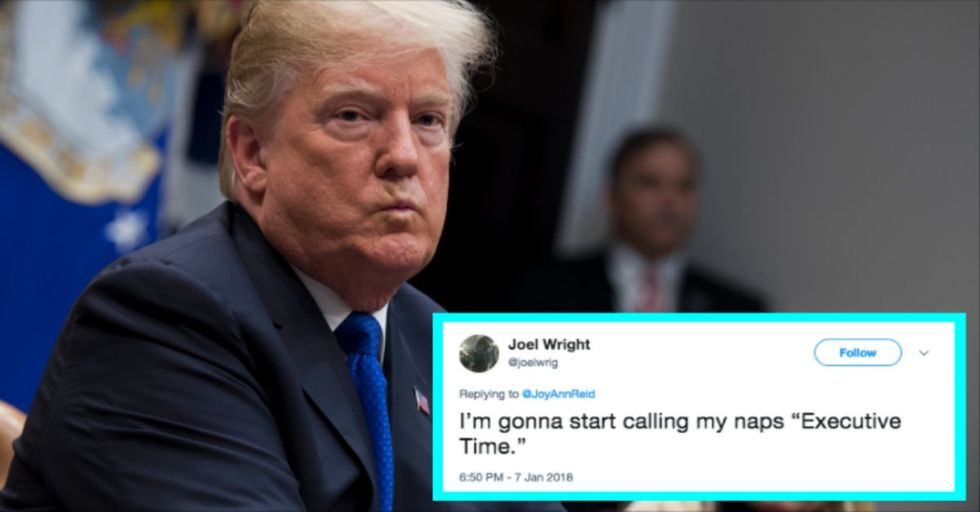 Trump Takes 'Executive Time' to Watch TV and Tweet Every Day, Because of Course He Does

We probably all spend too much time on the Internet. Most people just accept that fact, maybe feel a little guilty about it, and then move on with their lives. Maybe they also make a New Year's resolution to put their phone down more often.

That's not what the president does, though. Apparently, Donald Trump calls his free time "Executive Time." And there is a lot of it built into his daily schedule.

A new report has revealed exactly what Donald Trump does all day.

You're probably thinking his days are full of meetings, phone calls, and signing harmful and shortsighted executive orders (when he remembers to actually sign them, anyway). There's some of that mixed into his daily schedule, but a new report from Axios has revealed that a good portion of his schedule is filled with something called "Executive Time."

The official schedule may say "Executive Time," but according to Axios, the reality is that Trump spends that time in the residence where he's watching TV, making phone calls, and (of course) tweeting.

We already knew that Trump watches a lot of television — that's partly why so many people thought that fake book excerpt about the gorilla channel was real — but the fact that it's literally built into his schedule is pretty darn bonkers.

And, of course, we know that he tweets a lot.

Obviously, the tweeting isn't limited to "Executive Time," as Trump's tweets come fast and loose throughout the entire day (much to the world's chagrin). But the beauty of "Executive Time" is that it provides ample opportunities for Trump to do his favorite thing. It's not watching TV, and it's not tweeting...

...It's tweeting about the TV shows he just watched. Usually something on Fox. Here's what he tweeted just yesterday morning:

In case you're wondering, yes, Fox and Friends did mention unemployment rates during yesterday morning's broadcast.

Trump finally arrives at the Oval Office at 11 a.m. for his first meeting, looking approximately nothing like this adorable dog:

11 a.m.! (To put that in perspective, George W. Bush typically started his days at 6:45 a.m. while he was president.) Here's Trump's schedule for today (Tuesday, January 9) according to the Axios report. I've gone ahead and bolded the Executive Time slots just so you really get a sense of what it is our president spends his days doing: 8 a.m. — Executive Time 11 a.m. — meeting with Chief of Staff John Kelly 11:30 a.m. — Executive Time 12:30 p.m. — Lunch 1:30 p.m. — Executive Time 2:45 p.m. — Meeting with National Security Adviser 3:30 p.m. — Executive Time 3:45 p.m. — Meeting with head of presidential personnel 4:15 p.m. — End of day. Yeah, you read that right. After starting his day at 11 a.m., Trump will be retiring back to the residency at 4:15 p.m. By the time you're reading this article, which is the first thing I wrote today, Trump may very well be done with his day of work. 5 1/2 hours of "Executive Time" must be simply exhausting for the guy who has also spent more than 25 percent of his presidency on a golf course. People aren't that surprised by Trump's insistence on having free time. After all, it's just another way in which the White House functions essentially as a daycare. In fact, many people find the whole "Executive Time" thing pretty hilarious...

It's the perfect euphemism.

'Executive Time' sounds like something your dad says as he heads into the bathroom w/ a stack of magazines/newspapers ....
— amy walter (@amy walter)1515421979.0

Ew. Ew ew ew. Sorry for providing that mental image. I know. It's bad. But that just goes to show you how powerful the term Executive Time actually is.

"Executive Time" is the perfect way to erase any guilt you may feel about your lack of productivity.

I used to feel bad about checking the headlines and Facebook. Now I just call it "Executive Time".
— Michael Noon (@Michael Noon)1515512087.0

After all, if the president is doing it, it must be OK, right? (Note: No. It is not OK. And if you are using Donald Trump as your moral compass in life, you are going to have a lot of problems, friend.)

But even though people are cracking jokes about the president's apparent need for MULTIPLE breaks from his job, Bette Midler managed to find a great silver lining:

The more time the president tweets and watches TV, the less he can spend actively ruining our country. (Assuming he can refrain from continuing to make threats of nuclear war via Twitter, that is.) In that case, Trump should take allllllll the Executive Time he thinks he needs (which is apparently a lot).

Anyway, I just wrote an entire article, so you know what it's time for?

It's time for me to go do more work because I'm an adult who has a job. Hope your day is also productive! On the bright side (and also in awful news), you're probably doing better than our president.