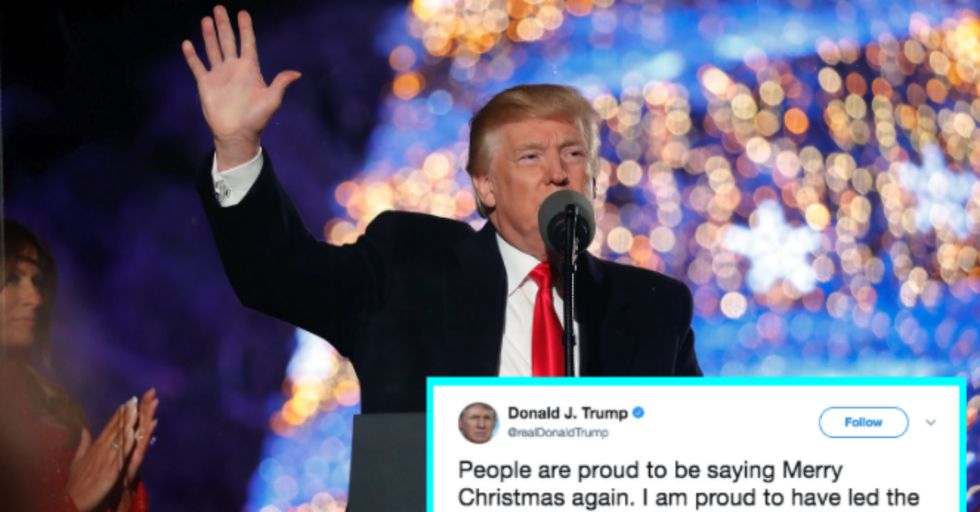 Trump Tried to Take Credit for Bringing back 'Merry Christmas,' but the Internet Wasn't Falling for It

Remember last year when we were all living in a weird Hunger Games world where it was against the law to say "Merry Christmas"? Anytime someone said *THAT PHRASE,* they were hauled off to jail for their Christmas crime until they said "Happy Holidays" instead. You might not have noticed it, but there wasn't a single person on Earth who celebrated Christmas in 2016. Because Christmas was illegal.

Wait, what's that? Christmas wasn't illegal? People were saying "Merry Christmas" and not facing any jail time whatsoever? Hm. Someone should probably let our current president know that.

That's right, boys and girls. According to Trump, there's been an assault on the phrase "Merry Christmas." And Trump knows a thing or two (or 19) about assault, so he must be correct, right?

Well, not according to the rest of the Internet.

Unfortunately for Donald J. Trump, the Internet's memory is better than his. People have been saying "Merry Christmas" for pretty much ever.

In Trump's mind, he is the first president who has been brave enough to say the words "Merry Christmas" without any fear of repercussions. (To be fair, he seems to do pretty much everything without a thought of what the consequences could be, so he's not totally wrong, there.)

But Trump isn't the first president to say "Merry Christmas." Here's Obama saying it back in 2009:

Ahhh, 2009. The wonderful year when Obama was in the White House and Trump was just a weird, mean guy from a reality TV show. And Obama's Christmas cheer didn't stop there.

Here's a video compilation of Barack Obama wishing people a Merry Christmas throughout his entire presidency.

That's right. Even Barack Obama — one of Trump's least favorite people ever — freely said the words "Merry Christmas." Now, let's take a look at Trump's holiday greetings from back in 2010...

Prepare yourself for this one.

Trump. Said. Happy. Holidays. Instead of Merry Christmas! Now, just in case it's not clear, there is absolutely nothing wrong with wishing someone "Happy Holidays" instead of saying "Merry Christmas." In fact, this tweet from Donald Trump may be his least offensive tweet ever.

That's because saying "Happy Holidays" is a nice thing to say.

Everyone in America is free to celebrate Christmas — or not! That's thanks to a little thing our country's founders referred to as religious freedom. It's kind of a big deal. You can say "Merry Christmas" to whomever you please, but it's polite to recognize the fact that not everyone celebrates Christmas.

That's why some people — including Trump's own daughter Ivanka — choose to say "Happy Holidays" instead.

Saying "Happy Holidays" is a great way to get everyone in on the holiday cheer. And that seems to be kind of the whole point of the holidays, no?

So, just so we're all clear: There is no war on Christmas, and there has been no assault on the phrase "Merry Christmas." There is, however, some controversy surrounding other words.

You may have read that the Trump administration banned the CDC from using the words listed above. As it turns out, it wasn't an outright "ban," but the CDC has been strongly discouraged from using them. Maybe we could focus on that rather than innocuous phrases like "Happy Holidays."

Oh yeah, and about that word "assault"...

@realDonaldTrump When was there ever an “assault” on the phrase merry Christmas? If only you could lead the charge… https://t.co/peLYMWFeBS
— Jeremy Vallin (@Jeremy Vallin)1514171710.0

Just as a reminder, saying "Merry Christmas" is not a crime. But sexually assaulting people is. Maybe we should be a little less concerned with how people are talking about the holidays, and a little more concerned by the person who's in the Oval Office.
20%