Trump Tweeted About Al Franken Assault Allegations, and That Was a Big Mistake | 22 Words 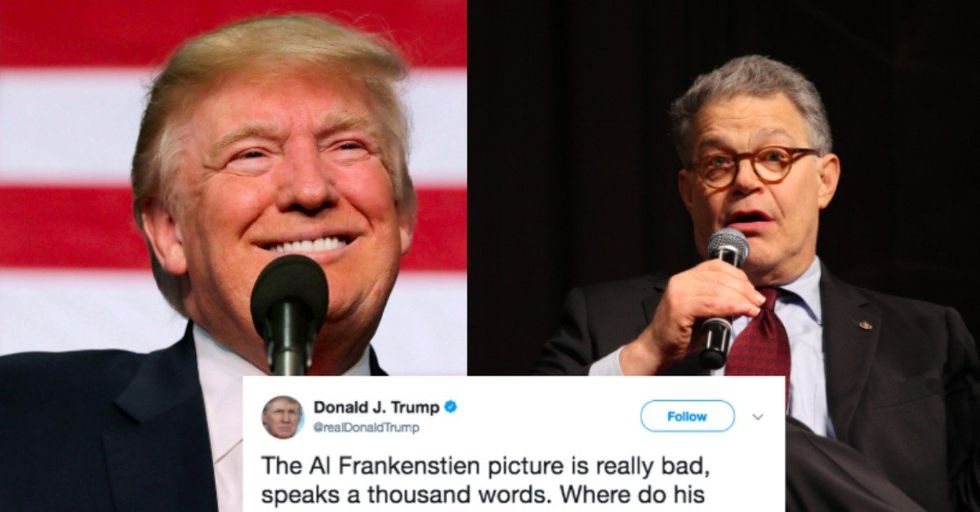 Trump Tweeted About Al Franken Assault Allegations, and That Was a Big Mistake

Donald Trump has certainly demonstrated that he cherry-picks the issues he tweets about. And this was no exception. On Thursday, Democratic Senator Al Franken was accused of sexual assault by TV broadcaster and radio personality Leeann Tweeden. On Thursday evening, Trump tweeted out his disgust of "Al Frankenstien" [sic]. The rest of Twitter showed up immediately to call Trump out for his transparent hypocrisy. After all, Trump hasn't said a word about alleged pedophile Roy Moore, and he certainly hasn't chastised himself for the multiple women who have accused him of harassment, assault, and rape. Hmm. Wonder why.

Donald Trump has a weird obsession with giving nicknames to people he hates, and he certainly did not disappoint when he tweeted about Al Franken on Thursday evening.

The photo he's referring to is appalling — it shows Al Franken going in to touch the breasts of a sleeping Leeann Tweeden. There is no doubt that what Al Franken did was highly inappropriate. Trump wants to know where Franken's hands went in "pictures 2, 3, 4, 5 & 6."

According to the Washington Post, The "Lesley Stahl tape" refers to a New York magazine story about a Saturday Night Live discussion among the writers in which Franken pitched a joke about raping 60 Minutes correspondent Leslie Stahl. Not a good look for Franken, to be sure.

Oh man, though, isn't it ballsy of Trump to bring up a tape on which a sexual predator says gross things about women?

Indeed, it is. If you'll remember, Trump is very famously on tape talking about how he likes to grab women "by the p***y" without their consent. According to Trump, though, his admission of sexually assaulting women was just "locker-room talk" while Al Franken's rape joke is inexcusable.

Let's also remember that Trump has been totally mum on the subject of Roy Moore's multiple allegations of child molestation.

Wonder why? Well, here's one hint: Al Franken is a Democrat and Roy Moore is a Republican.

Apparently, there is another reason Trump is reticent to bring up the allegations against Roy Moore:

Hmm. Interesting. Trump might be reluctant to bring up the Roy Moore allegations (but all gung-ho about bringing down Al Franken) because he's afraid of people bringing up the allegations against himself. However, the rest of Twitter wasn't so hesitant about calling out our president...

These are the names of the 14 women who have come forward publicly with allegations of sexual assault against Donald Trump, the President of the United States, who is supposedly so disgusted by the behavior of Al Franken.

Sexual assault cannot be transformed into a partisan issue. Every accusation of sexual assault needs to be taken as seriously as Trump took the accusation against Al Franken.

This means, of course, that the GOP should insist on ethics investigations into the allegations against Donald Trump. The only reason they haven't is that it's bad for them politically, and that's beyond disgusting.

In conclusion, there are so many things wrong with Trump's choice to tweet about Al Franken but not address Roy Moore.

It's unconscionable that our president can hold office while he is accused of raping a 13-year-old girl, raping his wife, and assaulting and harassing dozens more. "Frankenstien" may have been spelled wrong in Trump's tweet, but there's no doubt there are monsters in our midst.