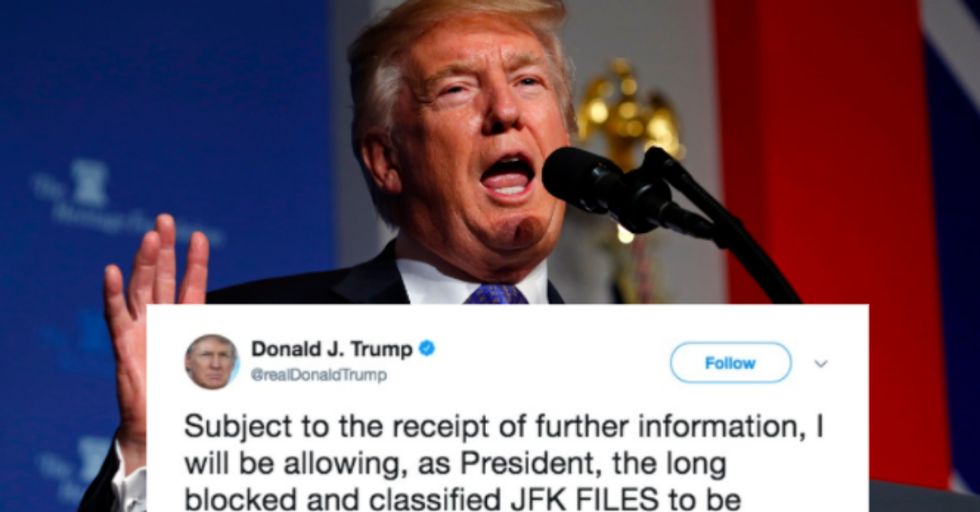 On Saturday, October 21, Donald Trump tweeted that he will allow the release of classified government documents surrounding the assassination of President John F. Kennedy on Thursday, October 26.

It really seems like our dear president wants to take credit for this move, but there's one little thing standing in the way of that — the law.

Trump tweeted that he will allow, "as President" (as he feels the need to remind everybody), the "long blocked and classified JFK FILES to be opened."

The problem is, Trump has little to do with their release. The deadline for the release of these documents was set in law by Congress. Their release to the public is mandated. It is in no way Trump's decision to make the documents public. Now, to be fair, he does have the power to not release some or all of the documents, which he may still do. However, a White House official told CNN, "The President believes that these documents should be made available in the interests of full transparency," so it doesn't seem likely that Trump will exercise that power. He's not known for his restraint. Historians say that these documents won't likely contain any smoking gun or lead to new bombshell conclusions. That's a shame, considering Trump is probably only releasing them to try to distract from the numerous other scandals he's party to.

For example, Trump is still spewing lies about his phone conversation with Myeshia Johnson, widow of the fallen soldier Sgt. La David Johnson.

Maybe if the media starts talking about these JFK files on Thursday, they'll forget that Trump told a grieving widow that her husband "must've known what he signed up for" and repeatedly called him "your guy" during the phone call, suggesting that he didn't even know his name. Maybe JFK will be enough of a distraction from the fact that he keeps calling Frederica Wilson, a Democratic congresswoman, "wacky."

Maybe if the public starts poring over old documents about the JFK assassination, they'll forget that the dossier Trump claims is discredited hasn't actually been discredited at all.

Maybe they won't focus on the time Trump made the insane accusation that the FBI, a government agency, paid for the dossier with help from the Russians and/or the Democrats. Maybe the fact that Trump rated his response to Puerto Rico a perfect 10 while the death toll keeps climbing and most of the island is without power will be pushed to the back burner when these new JFK files are released. Somehow, though, we don't think the American people will forget.