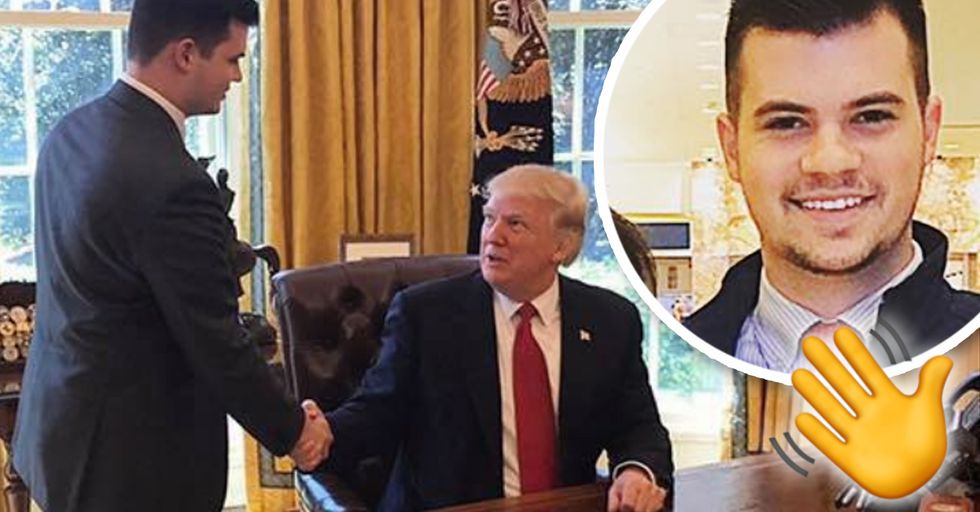 Come the end of this month, there will be one fewer liar in the White House! (No, it's not the one you're thinking.)

Taylor Weyeneth, the 24-year-old deputy chief of staff and White House Liaison at the Office of National Drug Control Policy, will be stepping down from his high-level post. Why? Because he lied on his resume.

In 2016, Weyeneth was an undergraduate student and frat member at St. John's University in New York.

He once organized a golf tournament to raise money for veterans and their families. After his graduation in May of 2016, Weyeneth worked for Donald Trump's presidential campaign.

Here he is rejoicing when Trump won. That's him on the far right (lol):

After Trump was elected, Weyeneth was hired as the White House liaison of the Office of National Drug Control Policy and an adviser to the office's top official.

A few months later, as a result of rampant staff turnover and departures, the then-23-year-old Weyeneth found himself rather inexplicably promoted to deputy chief of staff. Just to be clear here: At this time, Weyeneth's only post-college work experience was working on Trump's campaign. He had no experience whatsoever working within government, but here he was: deputy chief of staff of the ONDCP in the midst of a nation-wide opioid crisis.

In some alternate universe, this may be a story of a young man who was motivated to make the world a better place and therefore did whatever it took to eventually get a high-level job in the White House. But this is not that universe. We're living in the darkest timeline. This guy is the picture of failing upward.

Eventually, people started getting wise to the fact that Weyeneth was maybe not the most qualified person for his job.

Last week, the Washington Post took a closer look at Weyeneth's resume.  Actually, they took a look at the three different resumes he had presented to the federal government. The information they found there was pretty shocking...

For one thing, all three resumes had contradicting dates for his various jobs.

Strike one. In his first resume, he claimed to have volunteered at a monastery for more than 275 hours. His second resume said it was more than 150 hours. The third one didn't mention his volunteer work at all.
When the Washington Post contacted the monastery, two rectors said that they had no memory of Weyeneth, nor did they have paperwork related to his volunteer work (although they did not directly dispute that he had volunteered there). On all three of his resumes, Weyeneth claimed to have a master's degree in political science.

But guess what? In news that probably won't surprise you even a little bit, Weyeneth doesn't have a master's degree. In anything.

A spokesperson for Fordham University (the university from which Weyeneth claims to have earned his MA) said that there is a student named Taylor Weyeneth currently enrolled in the Master's program, but he has not completed his coursework. And honestly, that kind of makes sense. It's probably difficult to focus on all that homework while he's also the national Drug Czar.
Now, obviously, this guy Weyeneth screwed up. He majorly screwed up. It takes an enormous amount of both boldness and stupidity to accept a high-level position in the White House when you have zero experience. But the real problem here is not some frat boy failing his way to the top of the ONDCP.

It's that the White House — which ostensibly runs the country — ever allowed Weyeneth to reach that level in the first place.

Say it with me now: People who have no government experience do not belong in the White House. Now if we could just do something about that other guy...