Trump's Comments About Witnessing Harvey 'Firsthand' Have Many Outraged | 22 Words 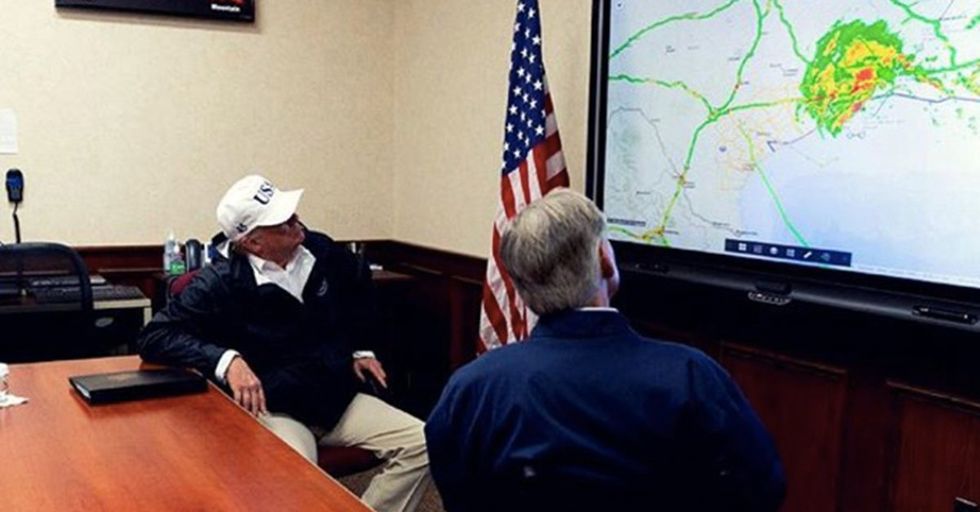 Trump's Comments About Witnessing Harvey 'Firsthand' Have Many Outraged

While President Trump was in Houston for a (surprise, surprise) controversial visit to Houston, he made a statement that raised a few eyebrows.

Now, the White House is doing a little damage control on the matter.

Another day, another controversy.

So, what exactly did he say?

It appears that the worst of Hurricane Harvey's rains may be behind us.

But that doesn't mean that the courageous people of Houston are in the clear. Not only does the flooding persist, but the rebuilding effort for the fourth largest American city will be substantial.

Damage has stricken the roughly 2 and a half million citizens in the Houston area.

While their spirit is admirable, the effort until now and after has required leadership.

Naturally, there's no role in the United States that embodies leadership more than that of President.

Doing what many Presidents have done before, Trump visited Texas to (ostensibly) survey the damage.

However, his visit seemed to be one that was largely self-serving.

Atop a truck in Texas, his appearance seemed to be indicative of some bizarre rally than anything actually useful to the people in need.

He spoke to many, far from the damage, as though it was a campaign event.

He was boisterous, and little attention was paid to the damage and danger present. But that's not what upset people the most...

It would be fine, but…

There was only one small problem…

...Trump didn't witness anything "firsthand." He didn't visit any disaster areas, nor did he meet with any hurricane victims. This tweet was the prevailing opinion.

As for that "firsthand" bit, well…

This was as close as he got to the storm and its damage.

“obtained by, coming from, or being direct personal observation or experience."

The White House tried to claim that his meetings with officials were "firsthand," but once again, the administration got hung up on the definition of a word.

People were quick to point out that what his press secretary said: “He met with a number of local officials who are eating, sleeping, breathing the Harvey disaster. He talked extensively with the governor, who certainly is right in the midst of every bit of this, as well as the mayors from several of the local towns that were hit hardest. And detailed briefing information throughout the day yesterday talking to a lot of the people on the ground — that certain is a firsthand account." ...was all "secondhand" stuff. And people are VERY mad.

They thought his "heartfelt" message was just a way to spin his seemingly callous rally.

And it's hard not to feel that way after seeing the sequence of events.

Once again, narcissism, crowd size, and ego were topics of discussion instead of true leadership.

This seemed by many to be a theme. Discussing the turnout at a rally is probably not the best way to address Hurricane Harvey.

Naturally, people were quick to compare Trump's reaction to that of previous presidencies.

Namely that of his predecessor, Barack Obama.

It's one thing when these "rallies" take place on idle time.

But there's a job to be done, and many feel that despite the White House's claims, Trump's just not doing it.

It's going to be ok, though.

The people are giving their help, and ultimately that will make more difference than any politician.