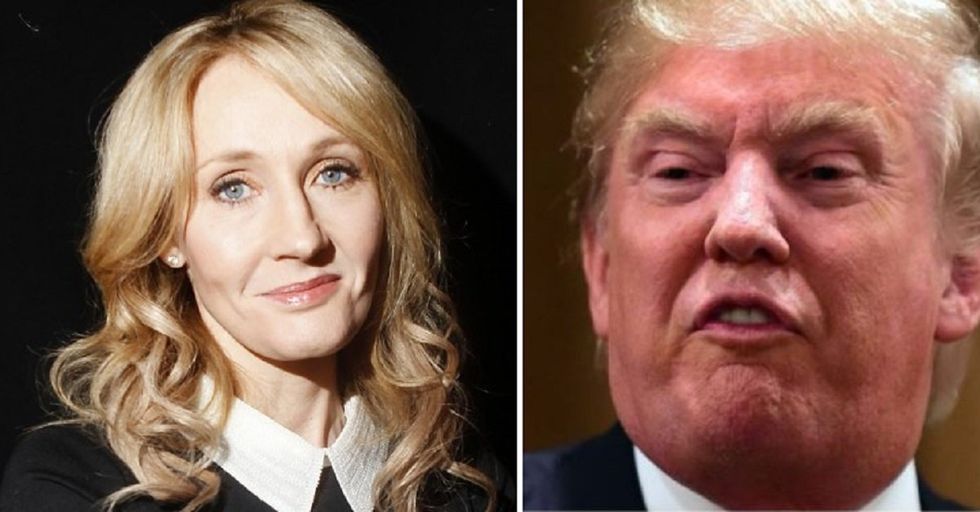 It's probably safe to say that J.K. Rowling is not the biggest fan of Donald Trump and it's hard to blame her. And after Trump's recent comments following Hurricane Harvey, she dragged him on Twitter once again, in her particular brand of epic Rowling fashion.

After someone compared Trump to the Dark Lord Voldemort, Rowling was quick to defend the Harry Potter villain.

During last year's debates, she made her feelings for the Donald known.

In a pretty humorous fashion, as per usual.

She even dissed his hand size.

She's not wrong, though.

Sarcastically saying that Trump actually did bring the Middle East together, if only over their mutual dislike of him.

So it's pretty safe to assume at this point, that she is not a fan of Trump.

So after Trump made some really weird comments about Hurricane Harvey, she laid into him even harder. Keep reading to hear what she said...

"It sounds like such an innocent name, but it's not" would be a hilarious quote if this wasn't real life.

Unfortunately, this is real life and not satire.

In case you youngin's don't get what she means, she is basically saying that you can pick literally anyone in the world and they can do better than Trump. He's gonna need some ointment for that burn.

People started dusting off their old phonebooks, and seeing if Rowling was actually correct.

And the responses are equally as funny as Rowling's original tweet.

Soon, everybody started checking their local yellow pages to see who could do better.

Among the suggestions for those who could do better was a pet rock.

Responses ranged from the insane to the hilarious...

That must be the phone directory for Hell.

One Twitter user didn't even have to open a phonebook to find a new candidate.

#KatesCat2020 But then, the conversation shifted to dissecting Trump's original comment.

Not everybody thinks so.

And even those people named Harvey aren't happy to hear that.

But to be fair, Harvey is kind of a nice sounding name.

The one thing everyone seemed to agree on...

Donald is a great name for a pantless duck.