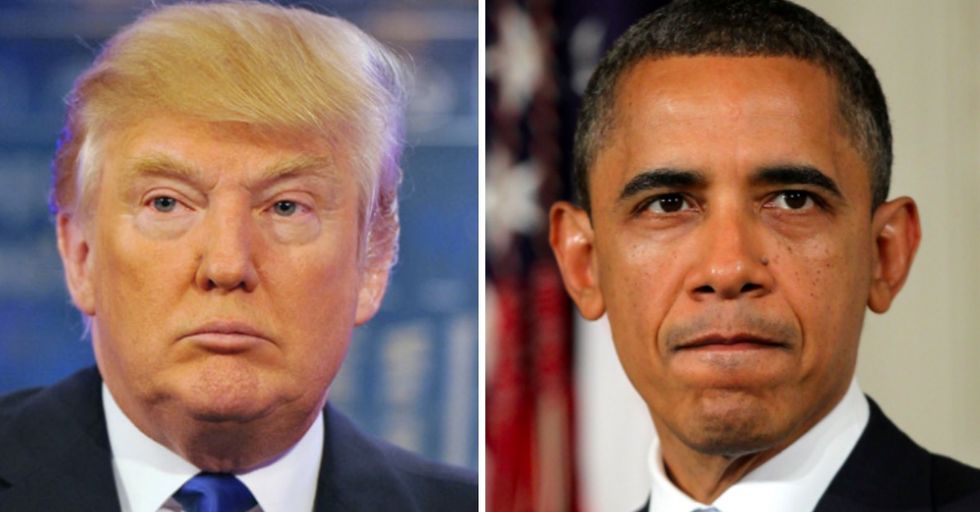 It's Monday, a fresh start to the week, which for President Donald Trump means a brand new day to go on a Twitter rant to blame other people for what's going on. While the majority of the tweets claim former President Barack Obama “colluded or obstructed” by not acting quicker on Russia’s meddling with the election, we have a little bit of everything.

He begins by calling the Democrats obstructionists — ALL CAPS.

"The Democrats have become nothing but OBSTRUCTIONISTS, they have no policies or ideas. All they do is delay and complain.They own ObamaCare!"

With that off his chest, he went on to blame President Obama for not doing anything about Russia allegedly meddling in the election.

"The reason that President Obama did NOTHING about Russia after being notified by the CIA of meddling is that he expected Clinton would win..."

And bringing up Hillary.

"...and did not want to "rock the boat." He didn't "choke," he colluded or obstructed, and it did the Dems and Crooked Hillary no good." Trump presumably is referring to a Washington Post report from late last week that detailed the challenges the Obama administration had in responding to reports of Russia interfering with the election. I'm sure this has nothing to do with the fact that he's being investigated by both houses of Congress and law enforcement into whether he obstructed justice and if Russia meddled in the election.

Then he circled back to blaming Obama.

"The real story is that President Obama did NOTHING after being informed in August about Russian meddling. With 4 months looking at Russia..." Actually, Obama imposed sanctions on Russia and took away diplomatic compounds that housed Russian officials in the United States, but minor detail, I guess.

Finally, he demanded an apology.

I guess "T" people are "Trump" people? Or maybe T-birds like Danny Zuko and Kenickie warming up for a lively rendition of "Greased Lightning?" Looks like we'll have to wait for the next Twitter rant. But don't worry — it shouldn't be long.