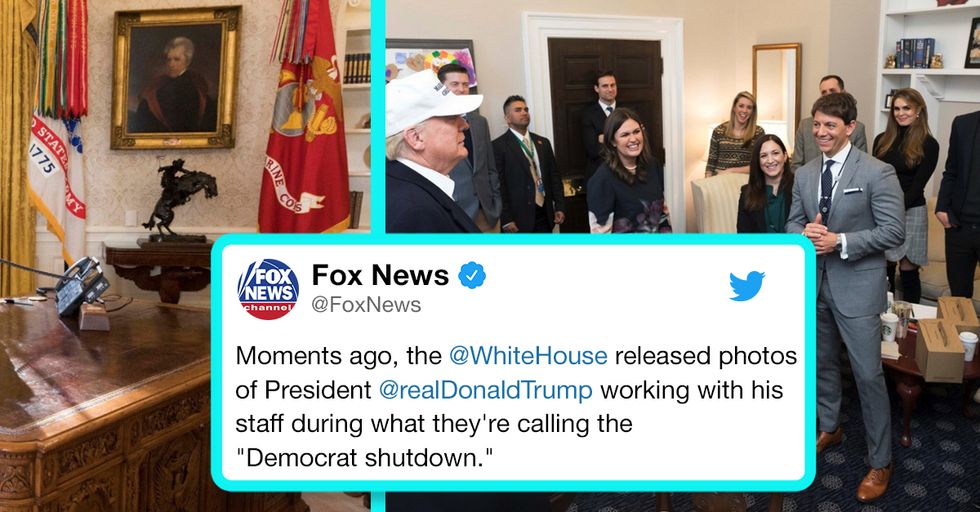 In case you weren't aware, there's a government shutdown going on.

Of course, Donald Trump doesn't want you to think he's not doing work during the shutdown. After all, he's a hard-working president who is always working and who definitely doesn't take multiple hours of "Executive Time" every day or spend egregious amounts of time at golf courses. Nope. Not at all.

To hear Donald Trump tell it, this latest government shutdown was directly caused by Democrats.

Never mind that it could have been avoided had Republicans (including Trump) made some progress on a deal protecting DACA recipients. It's much easier to just blame the other side.

But even in the midst of the shutdown, Trump was determined to convince us all that he was "working hard."

And that's no easy feat. After all, last time he talked about getting back to work, he went on a multi-day golfing vacation. (Now, in his defense, in Physics, work is defined by applying force over a distance. That is definitely done in a game of golf. But somehow, I don't feel like that's what he meant by "back to work."

So, what's a PR team to do? Stage a bunch of photographs of Trump working, of course! The White House released the following three photos to show Trump working during the shutdown.

Here you can see Trump doing the hard work of walking while wearing a hat. Before you make fun of him for how little effort is being put in here, let's take a moment to remember that the man regularly struggles to drink water the way a normal human being would. This is basically a marathon.

Here he is doing the very hard work of standing in a room with other people.

And like, I get it. I also consider standing in a room full of people to be hard work.

Finally, there's this picture. This is my personal favorite:

Here Trump is doing the hard work of sitting a virtually empty desk and lifting up a phone handset while glaring into the camera. The Internet was not kind to this picture...

Comedian Roy Wood Jr. pointed out that the photo of Trump at the desk looks like something you'd do on a White House tour.

And there's something missing from the desk.

Besides things like papers, pens, and literally anything else that would make it look more convincing. Where's that big button he's bragged about having?

Maybe Trump is Marie Kondo-ing it.

Although I have a hard time believing this theory. If he were filling his life with the things that spark joy, that desk would be covered with food from McDonald's.

This is more what I'd expect the president's desk to look like: