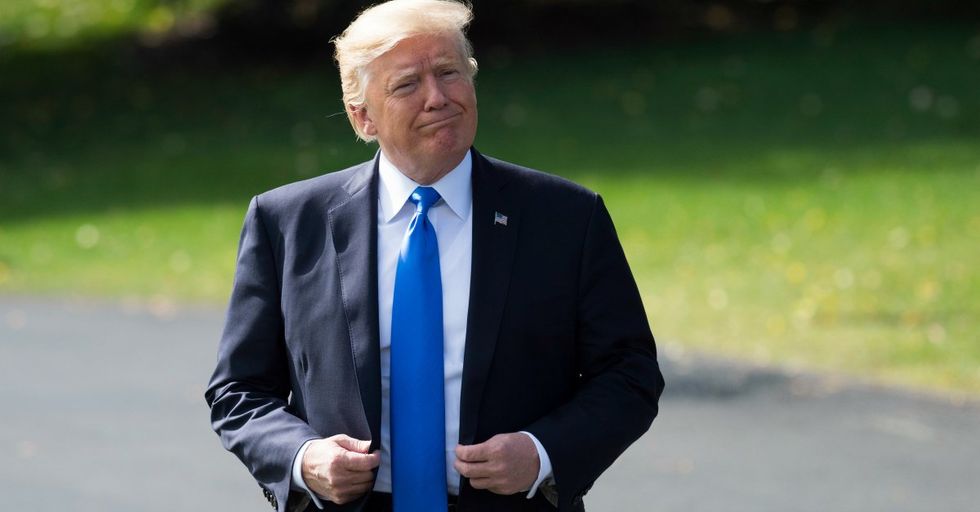 Think about the nicest person you know. What is it about them that makes them so nice?

It could be that they're super thoughtful and selfless and are always looking for ways to make the world a better place.

According to our president, though, it's none of those things. Instead, he believes that the college you attend has a huge effect on how nice of a person you are.

Earlier today, President Trump held an impromptu press conference where he answered reporters' questions on a number of topics. He spent more than 15 minutes talking to the press while a helicopter waited to take him to a Dallas fundraiser.

He also complained about the way the media portrays him, saying they depict him as being "more uncivil" than he actually is.

"I think the press makes me more uncivil than I am. You know, people don't understand. I went to an Ivy League college, " said Trump, who graduated from the Wharton School of the University of Pennsylvania in 1968. "I was a nice student, I did very well, I'm a very intelligent person. [...] I think the press creates a different image of Donald Trump than the real person."

What does attending an Ivy League school have to do with being a civil person? It's almost as if he had nothing else to point to as proof that he's civil. Surprise, surprise. Trump did not elaborate on his perceived correlation between education and civility.

Needless to say, people are less than impressed with his comments.

"Better to remain silent and be thought a fool than to speak and to remove all doubt." – Abraham Lincoln "I know words. I have the best words." – Donald Trump Need we say more?

During the press conference, Trump also claimed to have "one of the great memories of all time."

Trump, explaining why his recollection of call is better than Sgt Johnson's widow, says he has "one of the greatest memories of all time"
— John Harwood (@John Harwood)1508952204.0

First of all, do you know what makes someone a civil person? Humility. Something that Donald Trump does not have much of (despite that whole Ivy League education thing. Weird how that works out, right?). Secondly, about that great memory...

He's actually claimed to have this great memory at least once before. So where has it been all this time?

Donald Trump claims not to remember which doctor diagnosed him with bone spurs (allowing him to dodge the Vietnam draft). He doesn't remember which heel the bone spurs were in. He doesn't remember when the bone spurs stopped bothering him. He appeared to forget that his wife Melania was standing right next to him in Florida. He also appeared to forget to get into a car that was waiting for him — literally, right in front of him. During a deposition regarding Trump University, he didn't even remember saying that he had one of the best memories in the world. It appears that Trump's Ivy League education may leave a bit to be desired.