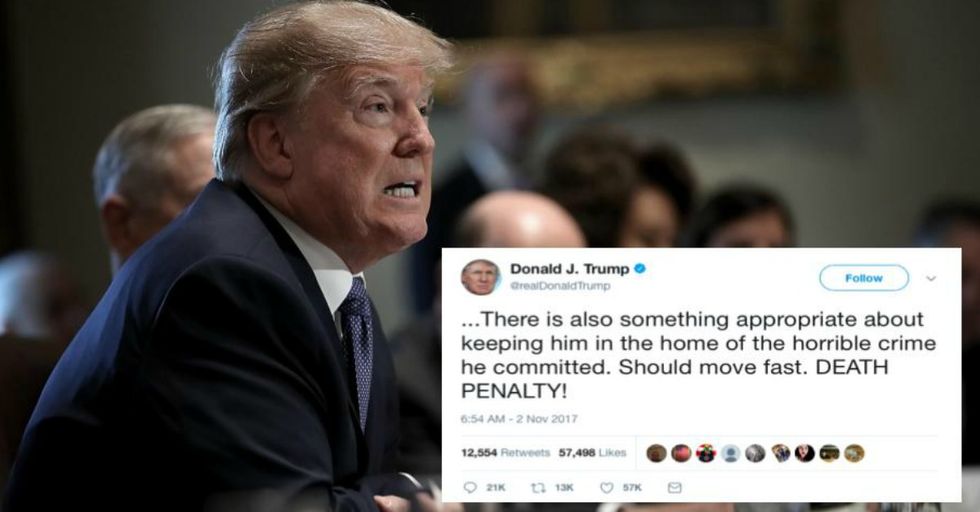 On April 19, 1989, 28-year-old investment banker Trisha Meili, a white woman, was jogging in Manhattan's Central Park when she was hit over the head with a rock, tied-up, gagged, and raped. It was a crime that would shock the nation, and deepen the already rancorous divisions in racially divided New York.

Then along came Donald Trump.

"Bring back the death penalty. Bring back our police!" the ads read. They were a thinly-veiled reference to the suspected perpetrators of the crime, 15-year-old Yusef Salaam, 14-year-old Raymond Santana, 14-year-old Kevin Richardson, 15-year-old Antron McCray and 16-year-old Korey Wise. Four of the boys were black, one was Latino.

In other words, they were black and brown children who had allegedly assaulted a white woman.

The boys, who confessed after several hours of sleep deprivation, interrogation, and beatings by the NYPD, were found guilty and given sentences of five to fifteen years in prison.

In 2002, Matias Reyes, a murderer and serial rapist already serving a life sentence in prison, came forward and admitted to the crimes. DNA evidence confirmed he was the sole perpetrator.

By then, the boys had already spent seven years in prison. Although they won a $41 million dollar settlement, the damage was done. Trump never apologized, and even now, still says the boys were guilty. Yusef Salaam believes Trump is partly to blame for their false imprisonment. "He was the fire starter," Salaam said to The Guardian. “Common citizens were being manipulated and swayed into believing that we were guilty."

Michael D’Antonio, who wrote The Truth About Trump agrees.

"He has this penchant for what you might call otherising," D’Antonio said. "I think he knew what he was doing by taking a side, and I think he knew he was aligning himself with law and order, especially white law and order. I don’t think that he was consciously saying ‘I’d like to whip up racial animosity’, but his impulse is to run into conflict and controversy rather than try to help people understand what might be going on in a reasoned way."

It's an impulse he still has today.

On Tuesday, Sayfullo Saipov, an immigrant from Uzbekistan plowed into a crowded bike path in Manhattan, killing eight people and injuring 11. ISIS later claimed responsibility for the attacks, and Saipov, who survived, reportedly asked for an ISIS flag in his room. It was a national tragedy, and a horrific moment for the nation.

...There is also something appropriate about keeping him in the home of the horrible crime he committed. Should move fast. DEATH PENALTY!

People immediately took to Twitter to condemn his comments for being racially divisive.

I see you haven’t changed since the “CentralParkFive days! Will you take out a full-page ad in the New York Times calling for death penalty?

If you look at these pictures and only see one terrorist, you are a racist, disgraceful, reprobate riling up your racist base! pic.twitter.com/EBdctvYsN2

You should take out an ad in the Times to make sure everyone knows he should get the death penalty too.

Your “extreme vetting" would’ve kept out Steve Jobs’ father, a Syrian refugee. You couldn’t tweet racist nonsense on ur iPhone this morning! pic.twitter.com/qkVV2DV4KD

Advocating the death penalty before trial isn't justice, it's a lynching. I despise what this man did to our city, but Trump is wrong here. https://t.co/YM80cFj7B6

How Trump responded one month ago when a white man shot nearly 600 Americans vs Manhattan terrorism.

Trump makes a mockery of our system of gov't, our judicial system, & has obstructed justice several times now. Calling for the death penalty on a suspect who hasn't gone to trial yet is just another offense @GOP will let him continue for his reality shitshow presidency.

They had a point.

My warmest condolences and sympathies to the victims and families of the terrible Las Vegas shooting. God bless you!

When asked whether the Paddock shooting was domestic terrorism, Trump declined to answer. He also had very vague answers about gun control. He said his administration would "be talking about gun laws as time goes by."

Fast forward to the New York shooting, and Trump had all sorts of answers.

He condemned the assailant.

In NYC, looks like another attack by a very sick and deranged person. Law enforcement is following this closely. NOT IN THE U.S.A.!

Then he condemned the assailant's alleged organization and place of origin.

We must not allow ISIS to return, or enter, our country after defeating them in the Middle East and elsewhere. Enough!

Then he tweeted about definite measures to ensure the tragedy wouldn't repeat itself.

I have just ordered Homeland Security to step up our already Extreme Vetting Program. Being politically correct is fine, but not for this!

Then he falsely blamed a Democratic senator for the program that allowed the assailant in.

The terrorist came into our country through what is called the "Diversity Visa Lottery Program," a Chuck Schumer beauty. I want merit based.

And added another tweet, again, based on a false assumption:

We are fighting hard for Merit Based immigration, no more Democrat Lottery Systems. We must get MUCH tougher (and smarter). @foxandfriends

And of course, he called for the death penalty, which had been reinstated in 1995 and then dismantled in 2007 without a single execution.

At this point, it's clear Trump has a pattern.

As Chris Cilliza of CNN stated, "Trump is more than willing to seize on tragic events when they confirm his previous political and policy beliefs. He will effectively ignore them when they don't." The answer is even simpler than that. Trump only attacks a certain kind of person, and that person is overwhelmingly female, foreign, and black or brown-skinned. In the President's eyes, the true threat to America is anyone who doesn't look like him.